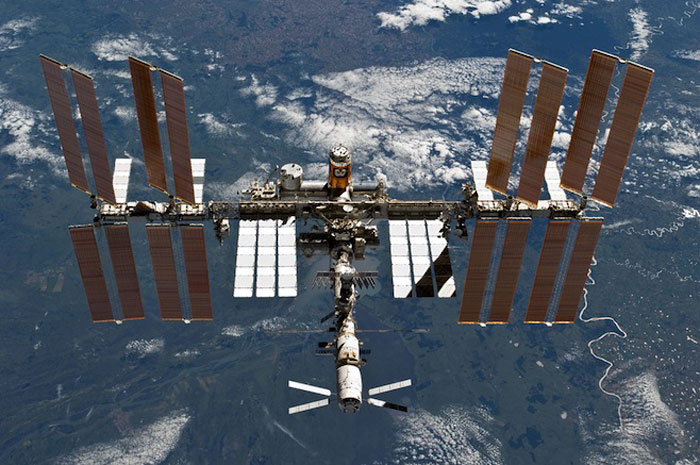 The U.S. segment of the International Space Station (ISS) has been evacuated and sealed off from the rest of the station after indications of a hazardous chemical leak were discovered, a senior NASA official said Wednesday.
Sean Fuller, NASA's top representative in Russia, told The Moscow Times by phone that the U.S. and European crew living in the U.S. side of ISS had taken refuge in the Russian segment after a possible ammonia leak was detected.
Ammonia is a highly toxic substance used in the cooling systems of spacecraft and space stations.
Fuller said NASA had not yet conclusively confirmed the ammonia contamination on board the $150 billion orbiting outpost, but that the crew is following procedure to isolate a possible danger zone.
A statement from the Russian space agency, Roscosmos, on Wednesday said the entire 6-man international crew is in the Russian segment of the space station, which has been sealed off from the U.S. side after signs of a leak were detected at 11.44 a.m. Moscow time.
"The crew's safety has been achieved through the coordinated and expedient actions of the cosmonauts and astronauts, as well as the mission control teams in Moscow and in Houston," the head of the Russian mission control center in Moscow, Maxim Matyushin was quoted as saying in the Roscosmos statement.
The atmosphere in the Russian segment shows no sign of ammonia contamination, both sides said. According to Fuller, the crew's immediate task is to verify the existence of the leak.
Quelle: The Moscow Times
.

Update, 7:45 a.m.:
NASA says the an alarm triggered at 4 a.m. EST in the U.S. section of the ISS prompted astronauts to move to the Russian section.
Flight controllers say they are unsure if the alarm was triggered by a spike in pressure, a fault sensor or a relay box problem.
More updates as we get them.
Update, 7:29 a.m.
No ammonia leak has been confirmed and the crew aboard the station is safe, according to a tweet from NASA.
The administration says the six-person crew responded to coolant loop pressure increases. They are following safety procedures as they monitor pressure levels.
Quelle: Florida Today
...
The Expedition 42 crew members are safe and in good shape inside the Russian segment of the International Space Station following an alarm in the U.S. segment at about 4 a.m. EST.
Flight controllers in Mission Control at NASA’s Johnson Space Center in Houston saw an increase in pressure in the station’s water loop for thermal control system B then later saw a cabin pressure increase that could be indicative of an ammonia leak in the worst case scenario. Acting conservatively to protect for the worst case scenario, the crew was directed to isolate themselves in the Russian segment while the teams are evaluating the situation. Non-essential equipment in the U.S. segment of the station was also powered down per the procedures.
In an exchange at 7:02 a.m. with Expedition 42 Commander Barry Wilmore of NASA, spacecraft communicator James Kelly said flight controllers were analyzing their data but said it is not yet known if the alarm was actually triggered by a leak or whether the situation was caused by a faulty sensor or by a problem in a computer relay box that sends data and commands to various systems on the station.
Quelle: NASA
.
Update: 15.01.2015
.

NASA: After false alarm, ISS crew back to US segment

Astronauts have returned to their home on the International Space Station after an alarm suggesting a possible ammonia leak forced the crew to seal themselves in a Russian segment of the orbiting outpost — twice.
In an update issued by NASA, station managers directed the ISS residents to fully return to the American segment by end-of-day Wednesday after no ammonia was detected in the cabin. The crew is still safe and teams at the Johnson Space Center in Houston continue to evaluate data from Wednesday morning's suspected false alarm.
Michael Suffredini, manager of the International Space Station Program, said a "computer card" could be to blame for alarm that was activated due to off-scale readings.
While flight controllers continue to analyze the data, some of the crew re-entered the station's American segment at 3:05 p.m. Eastern Time with the same protective masks they were forced to wear when the alarm was triggered. The crew is taking samples of the air as a safety precaution and will remove the masks if a lack of ammonia is again confirmed.
Quelle: Florida Today