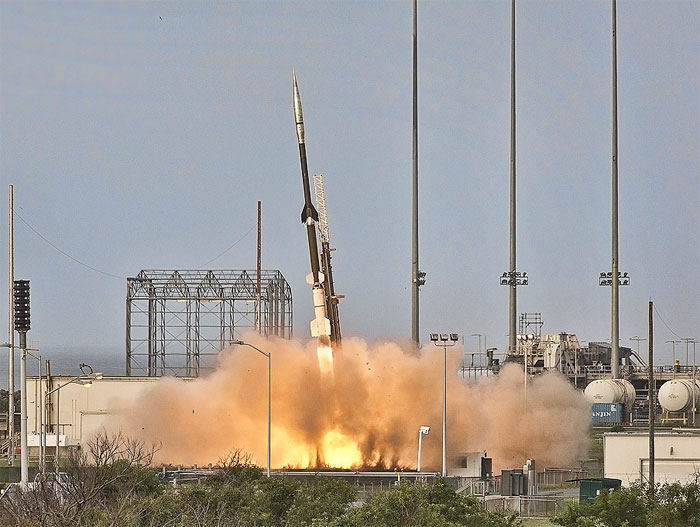 A 64-foot, 22-inch (19.5 meters, 56 centimeters) diameter Black Brant XI sounding rocket launched the IRVE-3, encased in a nose cone, from NASA's Wallops Flight Facility on Virginia's Eastern Shore. The rocket with the inflatable on board shot 288 miles (463.5 kilometers) up and IRVE-3 and its payload were ejected into the atmosphere. The technology demonstrator inflated and fell back to Earth -- cameras and temperature and pressure sensors monitoring its performance all the way down. After a total of 20 minutes -- from launch to splash down -- it landed in the Atlantic about 100 miles (161 kilometers) East of Cape Hatteras, North Carolina.
"Everything went well... like clockwork. The IRVE-3 performed just as it was supposed to," said Neil Cheatwood, IRVE-3 principal investigator at NASA's Langley Research Center in Hampton, Va. "It entered Earth's atmosphere at Mach 10, ten times the speed of sound, and successfully survived the heat and forces of the journey. Temperatures recorded were as much as 1,000 degrees Fahrenheit (538 degrees Celsius) and the IRVE-3 experienced forces up 20 G's."
What makes that particularly remarkable according to engineers is that the IRVE-3 wasn't made of metal or composite materials like most spacecraft heat shields or aeroshells -- it was made of high tech fabric and inflated to create its shape and structure. The IRVE-3 looked like a 10-foot (3 meter) diameter mushroom composed of a seven giant braided Kevlar rings stacked and lashed together -- then covered by a thermal blanket made up of layers of heat resistant materials.
The trip through the atmosphere provided researchers lots of data that will help them design better heat shields in the future. But they will also have the chance to study the IRVE-3 first hand. A high-speed Stiletto boat provided by the U.S. Navy was on stand by to retrieve it. Stiletto is a maritime demonstration craft operated by Naval Surface Warfare Center Carderock, Combatant Craft Division, and is based out of Joint Expeditionary Base (JEB) Little Creek-Ft Story, Va.
IRVE-3 is part of the Hypersonic Inflatable Aerodynamic Decelerator (HIAD) Project within the Game Changing Development Program, part of NASA's Space Technology Program. NASA Langley led the project and built two of the four segments of the IRVE-3 payload. Wallops provided its rocket expertise and built the other two payload segments. Airborne Systems in Santa Ana, Calif. provided the inflatable structure and thermal blanket.
"Today's test is the first example of what we are going to be doing in the Space Technology Program during the coming months and years," said James Reuther, Space Technology Program deputy director. "We are building, testing and flying the technologies required for NASA's missions of tomorrow."
Quelle:NASA
.
Update: 24.07.2012 / 20.30 MESZ
Erfolgreiches Hitzeschild-Experiment, nachfolgende Frams: NASA-Video

.
Update: 4.01.2015
.
Nasa to test inflatable heat shield based on a child's toy that could help put people on Mars (let's hope they don't get too deflated if it doesn't work)


Nasa plan to test inflatable technology in their quest to put people on Mars
Scientists believe a blow-up heat shield could be used on future spacecraft
Shield resembles stacking ring of doughnuts that young children play with
New technology needed as parachutes and rockets cannot be used to slow down large spacecraft when entering the Martian atmosphere
.
When some of the world's first aviation pioneers tried to reach the skies centuries ago, they inflated hot air balloons.
And now Nasa are looking into inflatable technology once more, this time as a way of reaching the next frontier in human space travel - Mars.
Scientists are considering using a blow-up heat shield, which resembles stacking ring of doughnuts that young children play with, for future missions to the red planet.
. 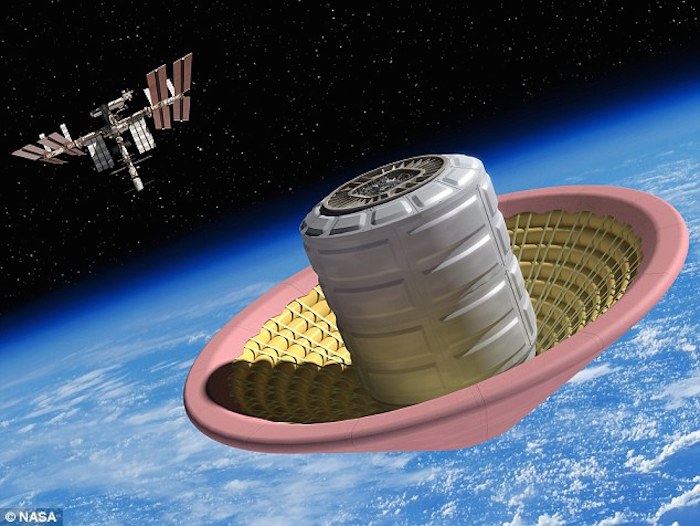 Scientists are considering using an inflatable heat shield, which resembles stacking ring of doughnuts that young children play with, for future missions to Mars 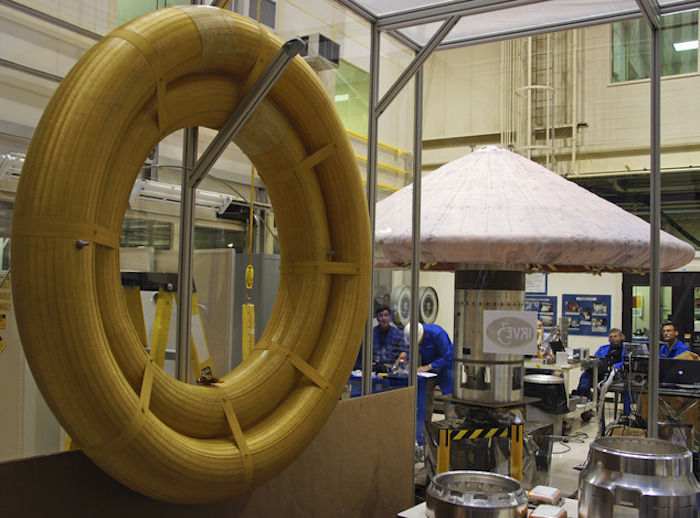 An inflatable heat shield, such as the one pictured, could help a future spacecraft slow down enough to enter Mars' atmosphere
.
Nasa engineers believe a lightweight, inflatable heat shield could be deployed to slow the craft to enter a Martian atmosphere, which is much thinner than Earth's.
Such an inflatable heat shield could help a spacecraft reach the high-altitude southern plains of Mars and other areas that would otherwise be inaccessible under existing technology.
The experts say rockets alone can't be used to land a large craft on Mars, as can be done on the Moon. Parachutes also will not work for a large spacecraft needed to send humans to Mars, they add.
The rings would be filled with nitrogen and covered with a thermal blanket. Once deployed for landing, the rings would sit on top of the spacecraft, resembling a giant mushroom.
Neil Cheatwood, Nasa's senior engineer for advanced entry, descent and landing systems at their base in Langley, Virginia, said: 'We try to not use propulsion if we don't have to. We make use of that atmosphere as much as we can, because it means we don't have to carry all that fuel with us.'
The scientists now aim to test how inflatable spacecraft technology performs upon re-entry into Earth's atmosphere.
. 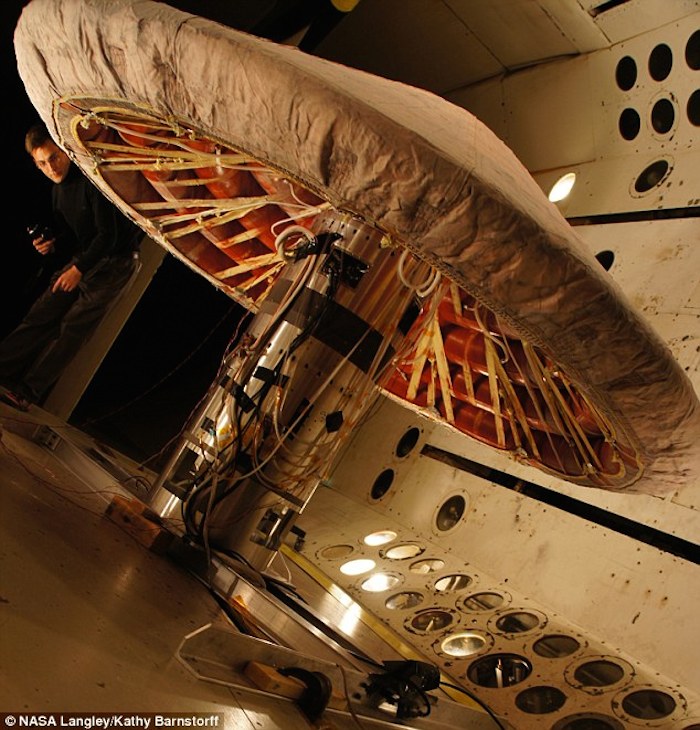 Once deployed for landing, the rings would sit on top of the spacecraft, resembling a giant mushroom 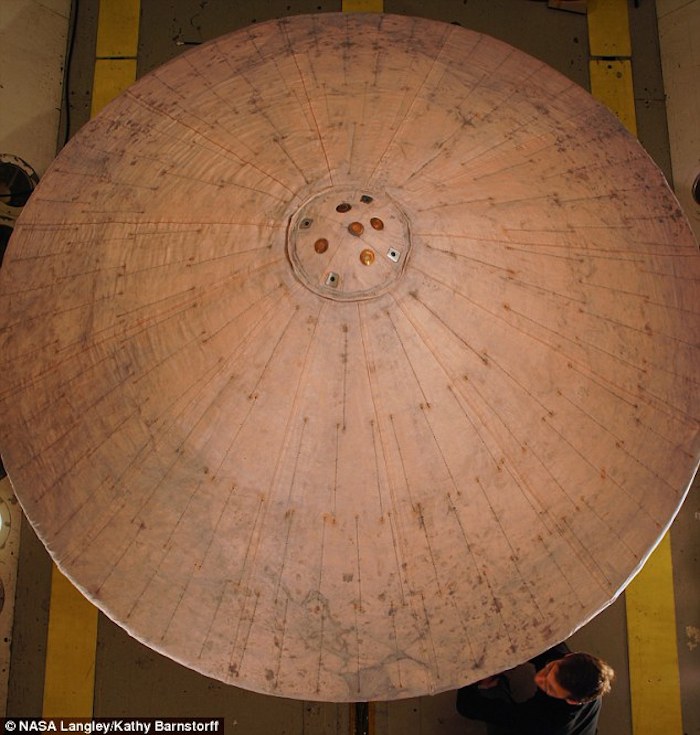 The scientists now aim to test how inflatable spacecraft technology performs upon re-entry into Earth's atmosphere
.
The test, scheduled for 2016, is important because NASA officials believe the shield could help them land astronauts on Mars and return larger loads of supplies from the International Space Station.
New technology is needed because the type of spacecraft that would land humans on the red planet would be much larger than anything that has landed on the planet previously and current heat shield technology is too heavy.
Nasa engineers have been working on the inflatable technology for about a decade, and believe it is close to being ready for operational use.
'If I had the budget and we had the funding to do it, I think we could get as large a scale as needed for humans in five to ten years,' Mr Cheatwood said.
. 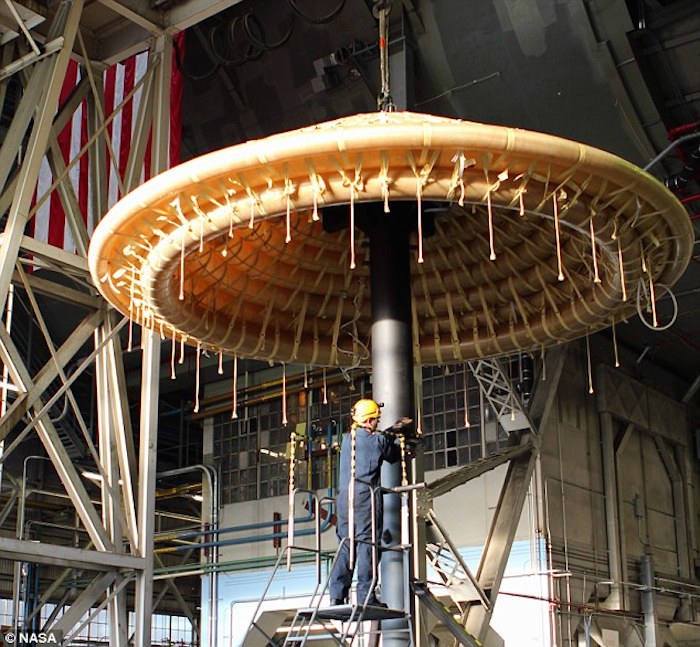 New technology is needed because the type of spacecraft that would land humans on the red planet would be much larger than anything that has landed on the planet previously
.
He said the same inflatable technology could also be used for spacecraft to explore other planets or objects with atmospheres, such as Venus, Titan and Jupiter.
Because the inflatables are made of lightweight material and filled with nitrogen, more room is left aboard a spacecraft for science experiments and other things astronauts will need. The inflatable is covered by a thermal blanket of layers of heat-resistant materials.
Anthony Calomino, principal investigator for materials and structures for hypersonic re-entry at Langley, said: 'The idea is that you would have something that could be packed up, put in a very small volume and then deployed into a very large size.'
He said in a statement in April: 'Think airbag, something we could pack into compressed volume that will fit the size limits of a launch shroud, but allow for a much larger aeroshell.'
Quelle: Daily Mail