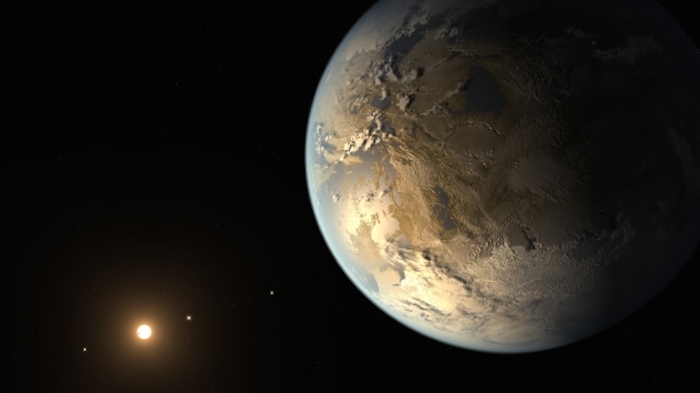 Planet hunters plot course for inhabited worlds
Researchers aim to set aside differences in search for life on distant spheres.
.
Scott Gaudi is tired of the fighting. An astronomer at Ohio State University in Columbus, he specializes in the notoriously fractious field of exoplanet research, in which battles have included bitter fights over data access and epic rifts between teams searching for planets outside our Solar System.
On 4 January in Seattle, Washington, Gaudi will take a tentative first step towards corralling this rowdy bunch. As chair of NASA’s Exoplanet Exploration Program Analysis Group, he will try to nudge a roomful of US exoplanet scientists into generating a coherent, specific vision for where the field should go.
The time is right. Researchers have almost finished combing through the thousands of leads that were produced by NASA’s planet-hunting Kepler spacecraft between 2009 and 2013, and are squeezing some more data out of the craft’s limited ‘K2’ mission extension (see Nature 514, 414–415; 2014). By the mid-2020s, budgets permitting, astronomers expect to have a satellite called the Wide-Field Infrared Survey Telescope (WFIRST) busy cataloguing planets that are too far away from their host stars for Kepler to have spotted them.
Together, Kepler and WFIRST will produce a rough census of how many planets there are in our Galaxy. But NASA has yet to work out how to tackle the next, more crucial questions: could anything actually live on any of these planets? And what will it take to understand a given world’s chances of being habitable?
“The big thing we’re wondering now is: what is it that we want to do after WFIRST?” says Gaudi.
He and others say that it is not too early to start worrying. NASA prioritizes its missions according to community surveys that happen every ten years. Exoplanet science fared badly in the 2010 survey, partly because the community could not agree on a unified vision.
“We live in a time where, for the first time in history, we can potentially answer whether we are alone in the Universe,” says Lisa Kaltenegger, an astronomer at Cornell University in Ithaca, New York. “It would be such a shame if we don’t get to it.”

Nearly everyone agrees that the next big step would be a space telescope that could observe alien worlds directly. (Kepler uses indirect methods to infer the existence of extrasolar planets.) Back in 2000, NASA even started planning such a spacecraft. But those dreams foundered on the potential cost of the mission, and on the lack of technologies to make it happen.

A direct-imaging telescope would use one of two methods to block out the light of host stars and let it detect much fainter planets in orbit around them. One approach is a coronagraph, a disc that sits inside a space telescope and blocks the light of the central star so that the planet pops into view. WFIRST is currently planned to have a coronagraph that would enable it to image exoplanets directly, but the instrument may be cut for budgetary reasons. Another option is a starshade, an orbiting piece of opaque material that would position itself at some distance from a space tele­scope and block the star’s light from there.

“We’d all be very disappointed if there wasn’t some kind of imaging mission in the next decade, given how exciting and vibrant this field is,” says Suvrath Mahadevan, an exoplanet researcher at Pennsylvania State University in University Park.

For now, the European Space Agency is planning PLATO (Planetary Transits and Oscillations of Stars), a 2024 exoplanet mission that would not image planets directly. And US astronomers will keep trying to pick up more bits of information about exoplanets. The Transiting Exoplanet Survey Satellite, a NASA mission scheduled for 2017, will hunt for planets crossing the faces of half a million nearby bright stars. And the James Webb Space Telescope, due to launch in 2018, will explore clouds and atmospheres on relatively small exoplanets — although it is unlikely to see anything as small as Earth.

Still, those upcoming missions do not really address the question of whether humans are alone in the cosmos, says Aki Roberge, an astrophysicist at the Goddard Space Flight Center in Greenbelt, Maryland. “I believe the time is near,” she says, “when we should really try to tackle it with a mission capable of finding habitable conditions on nearby Earth-like worlds and seeing if they might support life.”

Will We Find Extraterrestrial Life In 2015?

Probably not, but just possibly yes.
One of the reasons that the search for life elsewhere in the universe is so exciting is that it would take only one chance discovery, one lucky break, for all the walls to come tumbling down. But where is that revolution going to come from?
Perhaps the best news in 2014 came from the Curiosity rover’s apparent detection of a spike in atmospheric methane, discussed in the previous post. It’s far too early to know, but it is possible that this is a sign of extinct or extant life on Mars. Unfortunately, verifying any such claim is challenging.
On a practical level, for the rover to perform an isotopic analysis to provide further clues it will have to expend a lot of power and time, and hit it lucky with another surge in methane at its location. The other tricky part, in my opinion, is to do with whether or not we’re being overly cautious in interpreting data like this.
In the past 50 years we’ve gone from imagining alien life as a near certainty to something far more unknown, more precious. This scientific caution systematically lowers the statistical weight we wittingly, or unwittingly apply to a result like Curiosity’s methane detection. We demand extremely high standards from any data to prove the existence of something as important as life.
This is, by and large, a good thing. But we need to be careful that it’s not overly conservative, holding back progress. It was Carl Sagan who stated that “extraordinary claims require extraordinary evidence” – and it’s a critical standard to hold ourselves to. Yet it does hinge on just how extraordinary we presume something to be in the first place, and we do like to think that life is truly extraordinary – even though we don’t really know if that’s true.
So, Mars is one to watch in 2015.
We also keep finding reasons to go and visit places like Europa or Enceladus. Or for that matter any ice shrouded body that might harbor deep, dark oceans of water – places where life could perhaps exist. I wrote about this in detail for Sky & Telescope this year, but the bottom line is that we already suspect that altogether the solar system harbors at least 15 times the volume of Earth’s oceans in liquid water beneath the surface of bodies like these, including Ganymede, Titan, and perhaps even Pluto or Eris.
2015 will be a year of further planning and study for missions like NASA’s Europa Clipper and ESA’s JUICE. These flagships would not be able to explicitly search for life, but they could revolutionize our understanding of some of the most alien, yet promising, environments right in our own solar system.On the exoplanet front we can expect more planet candidates to emerge from the NASA Kepler mission’s data archive, as well as some interesting stuff from its extended ‘K2′ mission – following the failure of reaction wheels in the spacecraft.
. 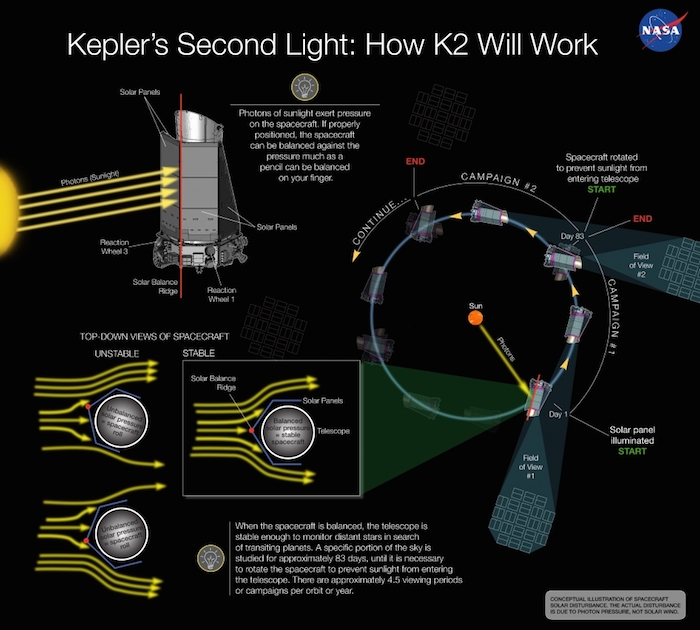 How the extended Kepler 'K2' mission works (Credit: NASA Ames/W Stenzel)
Some of the most important exoplanet data over the next couple of years will be detections of potentially habitable worlds around cool, lower-mass stars in our immediate cosmic neighborhood. These will become prime candidates for biosignature searches with the next generation of telescopes like JWST and the mammoth ground based observatories coming online over the coming decade. In 2015 though, I think one to watch is the ‘MEarth’ project – an innovative ground-based survey for precisely these worlds. It won’t find life, but it might find the planets that we eventually detect life on.
In the same vein as the study of icy moons in our solar system, the ongoing exploration of ‘primitive’ bodies like comets and asteroids is unlikely to suddenly produce evidence of life, but it is revealing an amazing rich history in the environments surrounding the Sun. In 2015 the incredible ESA Rosetta mission will continue as comet 67P/C-G loops through its closest approach to our star – hopefully unlocking much more about cometary compositions and ancient chemistry.
And in February 2015 NASA’s Dawn mission will arrive at Ceres. This could be a surprising and important encounter. Although we’ve often called Ceres an asteroid, that label doesn’t really begin to describe this object. Ceres, as a dwarf planet, is more akin to an icy moon than our traditional (and now changing) notion of what an ‘asteroid’ is. It’s nearly 600 miles across (that’s twice the size of Enceladus). It seems to be water rich, probably with a thick layer of ice beneath a dust covered surface. It may have a very tenuous atmosphere (or exosphere), and conceivably active cryovolcanism.
But what about that breakthrough detection of extraterrestrial life? The one other possibility, as it has been for decades, is that something intriguing will emerge from SETI. Placing odds on this being successful is, of course, next to impossible. However, there are new searches for so-called ‘techno-signatures’: whether in peculiar and inexplicable features within Kepler’s enormous database – strange stellar eclipses or flashing laser signals – or as unusual infrared glows from vast alien structures. The net is being cast a little further, and that’s a good thing.
Altogether, 2015 is definitely going to be an interesting year for astrobiology. I also hope that we continue to develop how we frame these efforts; as a crucial part of our species’ growth. Boxing this science up as something that’s independent of the very down-to-earth challenges we face is, I think, foolish. We’ve taken that path of willful ignorance for far too long. On a finite world a cosmic perspective isn’t a luxury, it’s a necessity.
There are now more than 7 billion human minds on Earth. For far too many of these minds, consciousness is tragically, heart-wrenchingly brief. Let’s restore some dignity to our flash of existence by discovering what else is out there, while also working to put the civilized back into civilization.
Quelle: Scientific American