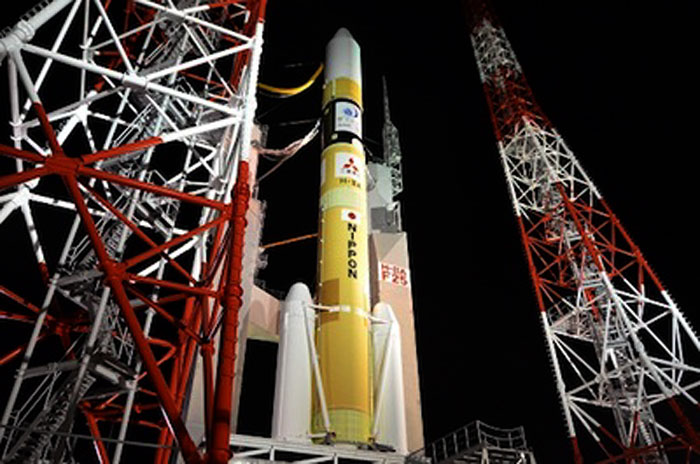 Upgraded Japanese weather satellite set for launch
A space-based weather monitor, equipped with upgraded instruments for more detailed and timely data on tropical cyclones and thunderstorms, is scheduled for launch Tuesday on top of Japan's 25th H-2A rocket.
The Himawari 8 weather observatory is shrouded inside the nose cone of the H-2A rocket, which rolled out to a seaside launch complex at the Tanegashima Space Center about 12 hours before the opening of Tuesday's launch window.
The 174-foot-tall rocket has four hours to take off Tuesday, beginning at 0516 GMT (1:16 a.m. EDT; 2:16 p.m. Japan time).
The launch is going forward Tuesday after Typhoon Phanfone skirted southwestern Japan over the weekend, bringing wind gusts and a storm surge that flooded coastal zones on Tanegashima Island.
Photos posted to Twitter on Monday showed cleanup of sand and debris that washed over the parking lot of the space base's media center.
Tuesday's launch will be conducted by Mitsubishi Heavy Industries, the H-2A rocket's manufacturer and commercial operator.
The launch team will fill the rocket's two stages with liquid hydrogen and liquid oxygen propellants during the countdown, test the launcher's safety, steering, and communications systems, and oversee a computer-controlled final sequence leading to ignition of the first stage's LE-7A main engine 5.2 seconds before liftoff.
The rocket's two solid rocket boosters will fire when the countdown clock reaches zero, accelerating the H-2A launcher away from Tanegashima Space Center.
The rocket will pivot east from the launch site, breaking the sound barrier in less than a minute and emptying the twin strap-on boosters before releasing the spent motor casings to fall into the Pacific Ocean.
Once the launcher flies above the denser layers of the atmosphere, the rocket will jettison its two-part payload fairing.
At the mission's 6-minute, 36-second point, the rocket's hydrogen-fueled first stage LE-7A main engine will cut off and fall away as the H-2A's upper stage ignites for the first of two rocket firings to put the Himawari 8 satellite into orbit.
The LE-5B engine's second burn is scheduled to end about 27 minutes after liftoff, then the second stage will set up for deployment of Himawari 8 about a minute later.
The H-2A rocket, going for its third successful flight this year, is aiming to put the satellite into a geostationary transfer orbit with a high point of 22,354 miles (35,976 kilometers), a low point of 155 miles (250 kilometers) and an inclination of 22.4 degrees.
Built by Mitsubishi Electric Corp., Himawari 8 weighs about 7,700 pounds with full fuel tanks at launch. The satellite will consume much of its propellant in the first few weeks after launch as it climbs into its operational circular orbit about 22,300 miles over the equator.
At that altitude, the spacecraft's orbital velocity will match the rate of Earth's rotation, allowing it to hover over Asia and the Pacific Ocean to collect real-time views of clouds and storms over the Eastern Hemisphere.
Himawari 8's position will be fixed over 140 degrees east longitude for a mission scheduled to last at least eight years for the Japan Meteorological Agency. The satellite's components are designed to operate for up to 15 years.
The spacecraft will enter service in 2015, replacing Japan's MTSAT 2 weather satellite launched in 2006. It is Japan's eighth geostationary weather observatory since the first satellite in the Himawari, or sunflower, series launched in 1977.
Himawari 8's primary instrument, an advanced imager, can see more detail in clouds and storm systems than the satellite's predecessors.
The imager can observe Earth in 16 visible and near-infrared color bands, while the MTSAT 2 satellite to be replaced by Himawari 8 takes data in five bands.
"This enhancement enables better understanding of the Earth's cloud conditions," JMA officials wrote in a brochure on the Himawari 8 mission.
Himawari 8 will take a full picture of East Asia and the Western Pacific every 10 minutes, an improvement over the half-hour update times available with Japan's previous weather satellites.
The spacecraft's imager can take pictures of certain areas, such as all of Japan, at even faster refresh rates -- every 2.5 minutes.
An identical satellite named Himawari 9 is set for launch on another H-2A rocket in 2016.
Quelle: SN
.
Launch Success of H-IIA Launch Vehicle No. 25
with "Himawari-8" Onboard
October 7, 2014 (JST)
Mitsubishi Heavy Industries, Ltd.
Japan Aerospace Exploration Agency (JAXA)
Mitsubishi Heavy Industries, Ltd. and the Japan Aerospace Exploration Agency (JAXA) launched the H-IIA Launch Vehicle No. 25 (H-IIA F25) with the Geostationary Meteorological Satellite “Himawari-8” onboard at 2:16:00 p.m. on October 7, 2014 (Japan Standard Time, JST) from the Tanegashima Space Center.
The launch vehicle flew as planned, and, at about 27 minutes and 57 seconds after liftoff, the separation of the Himawari-8 was confirmed.
We would like to express our profound appreciation for the cooperation and support of all related personnel and organizations that helped contribute to the successful launch of the H-IIA F25.
At the time of the launch, the weather was fine, a wind speed was 8.5 meters/second from the northeast and the temperature was 24.6 degrees Celsius.
Quelle: JAXA
.
Update: 8.10.2014
.

The H-2A rocket carrying the Himawari-8 weather satellite lifts off from Tanegashima Space Center on Tanegashima Island, Kagoshima Prefecture, at 2:16 p.m. on Oct. 7. (Koichi Ueda)
TANEGASHIMA ISLAND, Kagoshima Prefecture--Japan sent a next-generation weather observation satellite into orbit on Oct. 7, just two days after a typhoon threatened to cancel the launch.
The Himawari-8 satellite was atop a H-2A rocket that lifted off from the Tanegashima Space Center here at 2:16 p.m., spewing a trail of white smoke.
The H-2A jettisoned its solid-fuel booster rockets 1 minute and 45 seconds into the flight, followed by its first and second stages, releasing the probe into its initial orbit 28 minutes after launch.
Japan Meteorological Agency officials confirmed the Himawari-8 had unfolded its retracted solar panels and was generating power just past 4 p.m.
The satellite will enter geostationary orbit at an altitude of approximately 36,000 kilometers in about a week or so. It will come online next summer after trial runs.
Himawari-8, a new-generation meteorological satellite, features sensors with two times the resolution of its predecessor, the Multi-functional Transport Satellite-2, which was dubbed Himawari-7. The probe can record images at three times the rate of the MTSAT-2 and is also the first of the series to feature color imaging sensors.
This was the 19th consecutive successful launch in 25 missions of an H-2A rocket, giving it a 96 percent success rate. It was also the sixth liftoff in a row to be conducted on schedule.
The H-2A's track record is good news to the engineers and scientists anticipating the launch of the Hayabusa 2 asteroid explorer on Nov. 30. The probe is programmed to land on the asteroid 1999 JU3 orbiting between Earth and Mars. It is scheduled to return to Earth with rock samples from the asteroid in 2020.
"We kept our eyes on the weather forecast and sped up our process to maintain the rocket's launch schedule today," said Koki Nimura, a senior technician at Mitsubishi Heavy Industries Ltd., which launched the rocket. "We will put in the same effort to ensure the Hayabusa 2 is successfully launched as well."
Quelle: The Asahi Shimbun