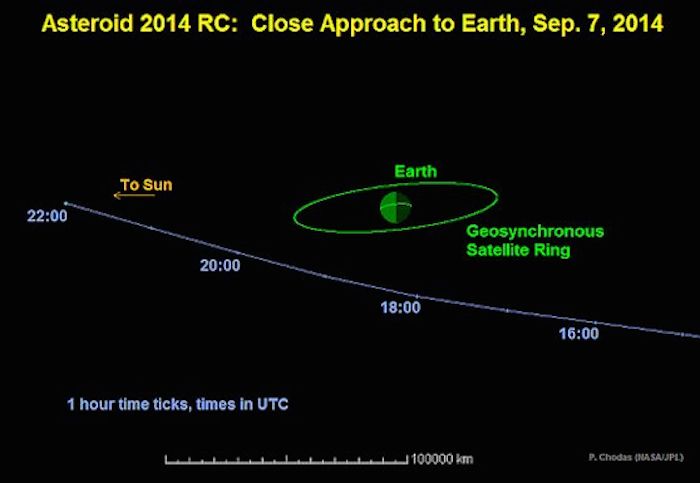 This graphic depicts the passage of asteroid 2014 RC past Earth on September 7, 2014. At time of closest approach, the space rock will be about one-tenth the distance from Earth to the moon. Times indicated on the graphic are Universal Time. Image Credit: NASA/JPL-Caltech

Asteroid 2014 RC was initially discovered on the night of August 31 by the Catalina Sky Survey near Tucson, Arizona, and independently detected the next night by the Pan-STARRS 1 telescope, located on the summit of Haleakalā on Maui, Hawaii.  Both reported their observations to the Minor Planet Center in Cambridge, Massachusetts.  Additional follow-up observations by the Catalina Sky Survey and the University of Hawaii 88-inch (2.2-meter) telescope on Mauna Kea confirmed the orbit of 2014 RC.
At the time of closest approach, 2014 RC will be approximately one-tenth the distance from the center of Earth to the moon, or about 25,000 miles (40,000 kilometers). The asteroid's apparent magnitude at that time will be about 11.5, rendering it unobservable to the unaided eye.  However, amateur astronomers with small telescopes might glimpse the fast-moving appearance of this near-Earth asteroid.
The asteroid will pass below Earth and the geosynchronous ring of communications and weather satellites orbiting about 22,000 miles (36,000 kilometers) above our planet’s surface.  While this celestial object does not appear to pose any threat to Earth or satellites, its close approach creates a unique opportunity for researchers to observe and learn more about asteroids.
While 2014 RC will not impact Earth, its orbit will bring it back to our planet's neighborhood in the future.  The asteroid's future motion will be closely monitored, but no future threatening Earth encounters have been identified.
Quelle: NASA
.
Update: 9.09.2014
.
ASTEROID FLIES BY EARTH: On Sunday, Sept. 7th, house-sized asteroid 2014 RC flew past Earth. There was no danger of a collision, but the space rock was close. It sailed just underneath Earth's belt of geeosynchronous satellites and about 40,000 km over New Zealand. Using robotic telescope in Australia, a team of astronomers led by Ernesto Guido photographed 2014 RC zipping through the southern constellation Phoenix at 10 km/s (22,000 mph):
.

2014 RC came from the asteroid belt just beyond the orbit of Mars. According to NASA, "2014 RC will return to our planet's neighborhood in the future. The asteroid's future motion will be closely monitored, but no future threatening Earth encounters have been identified."
Quelle: Spaceweather
Astronomie
« Zum vorherigen Eintrag Zum nächsten Eintrag »
2607 Views
Created with page4