Two Russian cosmonauts aboard the International Space Station will venture outside the orbiting outpost Monday, Aug. 18, for a six-and-a-half-hour spacewalk -- the 181st in support of space station assembly and maintenance. NASA TV coverage will begin at 9:30 a.m.
Expedition 40 Flight Engineers Alexander Skvortsov and Oleg Artemyev of the Russian Federal Space Agency will exit the Pirs docking compartment airlock about 10 a.m. EDT to deploy a small Peruvian science satellite, and install and retrieve science experiments on the exterior of Russian station modules. This will be the second spacewalk for both cosmonauts.
Skvortsov will be designated as extravehicular (EV) crew member 1 and will wear the Orlan suit bearing red stripes. Artemyev will be designated as extravehicular EV-2 and will wear a suit with blue stripes.
-

SKVORTSOV ALEXANDER ALEXANDROVICH
(COLONEL, RUSSIAN AIR FORCE)
TEST-COSMONAUT OF YU. A. GAGARIN COSMONAUT TRAINING CENTER
PERSONAL DATA: Born May 6, 1966, in Schelkovo, Moscow Region. Married to Skvortsova (nee Krasnikova) Elena Georgievna. They have one daughter, Anna. Hobbies include diving, soccer, badminton, fishing, hunting, and tourism.
EDUCATION: Graduated from the Stavropol Air Force Pilot and Navigator School as pilot-engineer in 1987, and in 1997 from the Military Red Banner ZhukovAir Defense Academy. Currently working on a law degree at the Russian Academy of Civil Service.
AWARDS: 70 years of Soviet Armed Forces medal, Russian Armed Forces Meritorious Service Medal of the 1st, 2nd and 3rd degree, Commendation Medal of 3rd degree, Military Superior Service medal of 2nd degree
EXPERIENCE: Skvortsov flew L-39, МiG-23 and Su-27 aircraft as a pilot, senior pilot and chief of aircraft formation. . Skvortsov has logged around 1000 hours of flight time. He is a Class 1 Air Force pilot, a qualified diver and paraborne instructor.
SPACEFLIGHT TRAINING: Skvortsov was selected as a GCTC cosmonaut-candidate in 1997. From January 1998 to November 1999 he participated in basic spaceflight training. Skvortsov received the qualification of a test-cosmonaut in November, 1999. In January 2000 he started ISS advanced training. Starting March 2008 he trained with the ISS 21/22 backup crew as a flight engineer and Soyuz TMA commander. Since October 2009 he has trained as an ISS 23/24 crewmember - Soyuz commander, ISS 23 flight engineer and ISS 24 commander. He currently lives and works aboard the International Space Station having launched aboard Soyuz TMA-18 on April 2, 2010.
-

OLEG GERMANOVICH ARTEMIEV
ROSKOSMOS TEST COSMONAUT
PERSONAL DATA: Born December 28, 1970, in Riga, Latvia.
EDUCATION: In 1990 graduated from the Tallinn Polytechnic Institute.
In 1998 graduated from the Moscow Bauman Technical University with a degree in low temperature physics and technology.
EXPERIENCE: In 1990 – 1991 he served in the Soviet Army in Vilnius, Lithuanian Soviet Socialist Republic (presently Lithuanian Republic).
Since 1998 till 2011 worked at the Energia Rocket Space Corporation.
COSMONAUT SELECTION DATE AND CLASS: In January 2003 successfully passed technical examinations at the Energia Rocket Space Corporation.
On May 29, 2003, the Interdepartmental Board assigned him to the GCTC Cosmonaut Corps for basic training.
On June 16, 2003, he started basic training for spaceflight and completed the training course on June 28, 2005, by passing state examinations at the GCTC with excellent scores.
On July 5, 2005, he was certified as a test cosmonaut.
SPACEFLIGHT TRAINING: January 29-31, 2005, Artemiev participated in winter survival training with Michael Barratt and Sandra Magnus, NASA astronauts, as a crew commander. Emergency landing of the Soyuz Descent Module was simulated in the Moscow Region forest and lasted for two days.
June 2-10, 2006, he took part in water survival training with Yuri Lonchakov and Oleg Skripochka. The Soyuz Descent Module emergency landing to the water was simulated near Sevastopol, Ukraine.
January 16-27, 2007, participated in winter survival training with Charles Simonyi from the USA and Sergey Revin in the forest 30 km away from Moscow.
November 15-29, 2007, he participated in a 14-day-long test as a part of the MARS-500 Experiment.
From March 31 to July 14, 2009, took part in a 105-day-long preparatory experiment for MARS-500.
CURRENT STATUS: Since 2011 he is a test cosmonaut of the Roscosmos Cosmonaut Corps.
.
Quelle: NASA
.
Update: Station Spacewalkers Deploy Nanosatellite, Install and Retrieve Science
.
Two Expedition 40 spacewalkers, clad in Russian Orlan spacesuits, wrapped up a 5-hour, 11-minute excursion outside the International Space Station at 3:13 p.m. EDT Monday.  Flight Engineers Alexander Skvortsov and Oleg Artemyev deployed a small science satellite, retrieved and installed experiment packages and inspected components on the exterior of the orbital laboratory.
Shortly after the spacewalk began at 10:02 a.m., Artemyev manually deployed Chasqui 1, a Peruvian nanosatellite designed to take pictures of the Earth with a pair of cameras and transmit the images to a ground station. The project is part of an effort by the National University of Engineering in Peru to gain experience in satellite technology and emerging information and communication technologies.
The spacewalkers installed the EXPOSE-R2 experiment package, a European Space Agency-sponsored suite of experiments, on the exterior of the Zvezda service module. The package includes two astrobiology studies that will investigate biomaterials and extremophiles – organisms that are tolerant of environmental extremes. Results from these experiments may contribute to life-detection strategies for future robotic exploration of Mars.
While on the conical section of Zvezda, they attached a handrail clamp holder for the Automatic Phased Array antenna. Skvortsov and Artemyev set up that communication systems antenna during their first spacewalk on June 19.
The cosmonauts also set up the Plume Impingement and Deposit Monitoring unit on the Poisk Mini Research Module-2.
Skvortsov and Artemyev retrieved several science packages designed to expose a variety of materials to the harsh environment of space. While on Poisk, they removed one cassette and install another on a materials experiment known by its Russian acronym SKK. The spacewalkers also retrieved a panel of sample materials from the Vinoslivost payload.
The retrieval of a Biorisk experiment container outside Pirs completed the science package roundup for the two cosmonauts. Biorisk studies the effects of microbes on spacecraft structures.
Skvortsov and Artemyev also collected residue samples from a window on Zvezda.
During the spacewalk, Commander Steve Swanson was isolated to the Poisk module and his Soyuz TMA-12M spacecraft docked there due to the closure of hatches in support of the excursion. Swanson, Skvortsov and Artemyev arrived at the station March 27 aboard that Soyuz. Flight Engineers Reid Wiseman, Alexander Gerst and Max Suraev had access to much of the remaining area of the station, including the Zarya module, their Soyuz TMA-13M vehicle and the Rassvet module to which it docked on May 28, as well as the entirety of the U.S. segment of the station.
Monday’s spacewalk was the 181st in support of space station assembly and maintenance.
While he was isolated inside Poisk, Swanson photographed the masts of the station’s starboard solar arrays for further inspection by the flight team.
Wiseman spent part of his day setting up new test samples for the Canadian version of the Binary Colloidal Alloy Test, or BCAT-C1. Results from this investigation of colloids – mixtures of small particles distributed throughout a liquid – will help materials scientists to develop new consumer products with unique properties and longer shelf lives.
Later, Wiseman and Gerst teamed up for a conference call with the ground team to discuss Friday’s robotic release of Orbital Sciences’ Cygnus cargo vehicle.  Gerst, with assistance from Wiseman, released Cygnus from the 57-foot Canadarm2 robotic arm, completing the commercial cargo vehicle’s month-long mission to deliver nearly 3,300 pounds of science and supplies to the orbiting laboratory.
Cygnus fired its thrusters for the final time at 8:34 a.m. Sunday to enable the cargo ship to slip out of orbit for its fiery decent into the Earth’s atmosphere.  Shortly afterward, station crew members were able to photograph the vehicle as it began to break up harmlessly over the Pacific Ocean at 9:22 a.m.
Gerst rounded out his workday Monday relocating items stowed inside the Quest airlock to prepare that area for the installation of a new Nitrogen Oxygen Recharge System, or NORS, at a later date. Wiseman meanwhile conducted an inspection of the station’s portable emergency provisions, including fire extinguishers and portable breathing apparatuses.
. 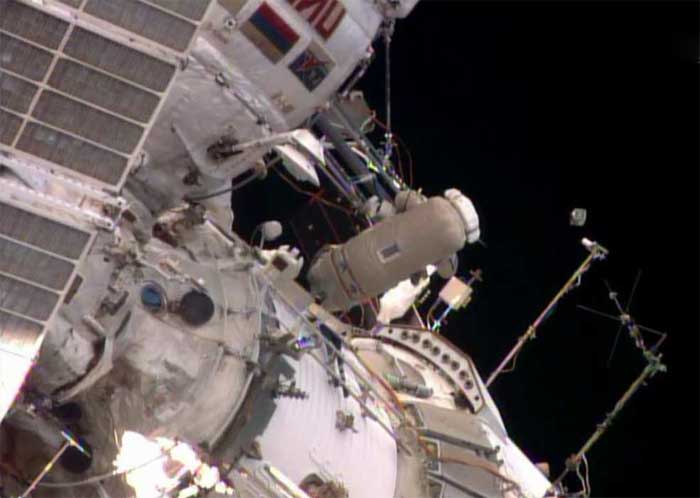 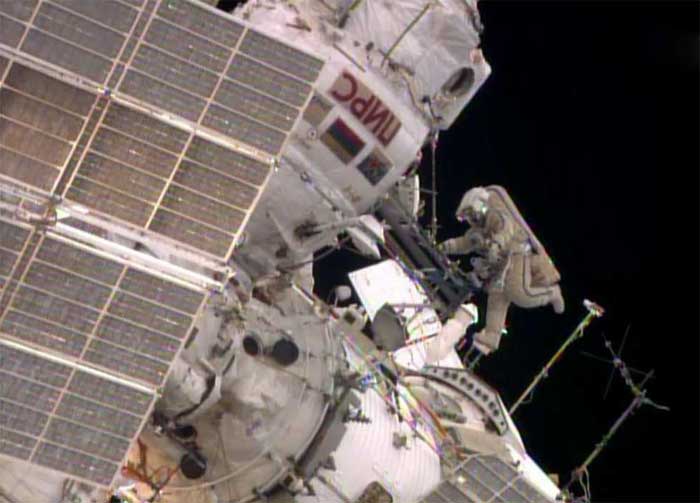