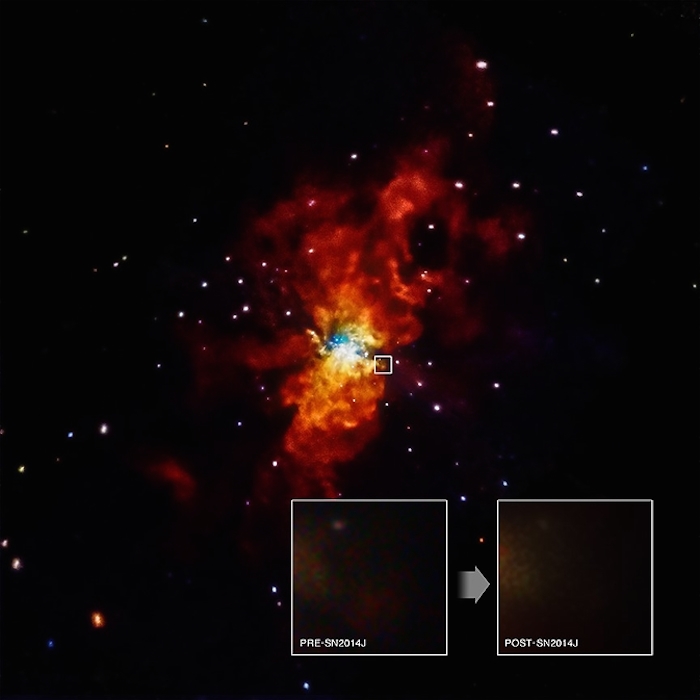 NASA’s Chandra X-ray Observatory is helping determine what caused SN 2014J, one of the closest supernovas discovered in decades. By comparing X-ray data taken before and after the stellar explosion, scientists can learn more about what set it off.
Image Credit: NASA/SAO/CXC/R. Margutti et al
.
New data from NASA’s Chandra X-ray Observatory offer a glimpse into the environment of a star before it exploded earlier this year, and insight into what triggered one of the closest supernovas witnessed in decades.
The data gathered on the Jan. 21 explosion, a Type Ia supernova, allowed scientists to rule out one possible cause. These supernovas may be triggered when a white dwarf takes on too much mass from its companion star, immersing it in a cloud of gas that produces a significant source of X-rays after the explosion.
Astronomers used NASA's Swift and Chandra telescopes to search the nearby Messier 82 galaxy, the location of the explosion, for such an X-ray source. However, no source was found, revealing the region around the site of the supernova is relatively devoid of material.
“While it may sound a bit odd, we actually learned a great deal about this supernova by detecting absolutely nothing,” said Raffaella Margutti of the Harvard-Smithsonian Center for Astrophysics (CfA) in Cambridge, Massachusetts, who led the study. “Now we can essentially rule out that the explosion was caused by a white dwarf continuously pulling material from a companion star.”
This supernova, SN 2014J, could instead have been caused by the merger of two white dwarf stars, an event that should result in little or no X-rays after the explosion. Further observations could rule out or confirm other possible triggers.
“Being able to eliminate one of the main possible explanations for what caused SN 2014J to explode is a big step,” said CfA’s Atish Kamble, a co-author of the study. “The next step is to narrow things down even further.”
Type Ia supernovas are used as cosmic distance-markers, and have played a key role in the discovery of the universe’s accelerated expansion. At about 12 million light-years from Earth, SN 2014J and its host galaxy are close -- from a cosmic perspective. This offers scientists a chance to observe details that would be too hard to detect in more distant supernovas.
“It’s crucial that we understand exactly how these stars explode because so much is riding on our observations of them for cosmology,” said co-author Jerod Parrent also from CfA. “SN 2014J might be a chance of a lifetime to study one of these supernovas in detail as it happens.”
The study of SN 2014J is similar to a study led by Margutti about another supernova, SN 2011fe, in the nearby galaxy M101.
This study was conducted by CfA’s Supernova Forensics Team, led by Alicia Soderberg. The results were published online and in the July 20 print issue of The Astrophysical Journal.
NASA's Marshall Space Flight Center in Huntsville, Alabama, manages the Chandra program for NASA's Science Mission Directorate in Washington. The Smithsonian Astrophysical Observatory in Cambridge, Massachusetts, controls Chandra's science and flight operations.
Quelle: NASA
2725 Views
Created with page4