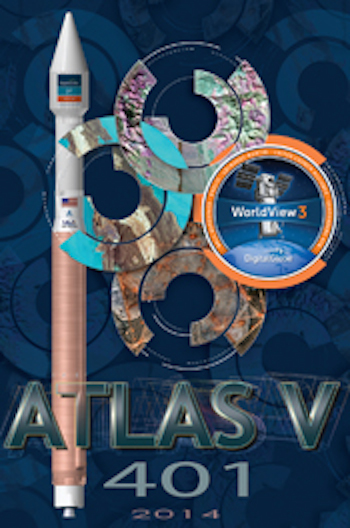 Viewing the Launch by Webcast: The live webcast will begin at 11:10 a.m. PDT.

Mission Description: The live webcast will begin at 11:10 a.m. PDT.
Mission Description: WorldView-3 will enhance DigitalGlobe’s industry-leading constellation and will further support customers across a variety of industries, such as agriculture, mining, and oil and gas.

Industry-leading satellite to be launched Wednesday from VAFB 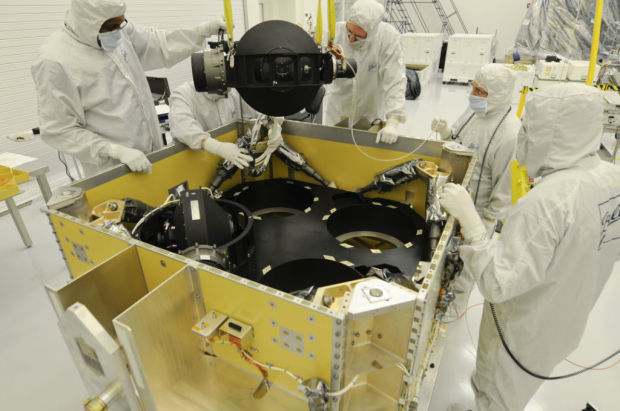 Ball Aerospace & Technologies Corp. in Boulder, Colo. work on the WorldView-3, the next generation commercial remote-sensing SATELLITE being built for DigitalGlobe last year.
.
A commercial SATELLITE that is the most advanced of its kind is slated to launch from Vandenberg Air Force Base aboard an Atlas 5 rocket Wednesday morning.
The launch, which has a 15-minute window opening at 11:29 a.m., will send a WorldView-3 satellite into orbit. The satellite, which was built by DigitalGlobe, will the first multipayload, super-spectral, high-resolution commercial satellite sent into space. It will allow DigitalGlobe to support its customers across a variety of industries, including agriculture, mining, and oil and GAS.
The United Launch Alliance-built rocket that will carry the SATELLITE will take off from VAFB’s Space Launch Complex-3. The 30th Space Wing at VAFB will be responsible for range safety and launch operations.
“The entire 30th Space Wing team of military, government civilians, and contractors are ALLhonored to launch the first Atlas V commercial mission from Vandenberg AFB,” said Col. Marc Del Rosario, 30th Operations Group commander and the launch decision authority. “The team's planning and behind-the-scenes hard work with United Launch Alliance, Lockheed Martin, and the Federal Aviation Administration are all integral to provide safe launch operations on the Western Range.”
The WoldView-3 satellite is expected to mark the next evolution in commercial satellite imaging.
According to a post on a DigitalGlobe blog, the WorldView-3 “will be able to provide 31 centimeter resolution from 617 kilometers away. For perspective, that is the same as the distance between Southern California’s Hollywood sign and the Golden Gate Bridge in San Francisco. If the imagery were located at the Hollywood sign, users would be able to count all of the people on the Golden Gate Bridge.”
The satellite will also reportedly, thanks to its spectral bands, be able to relay images through obstructions like CLOUDS or smoke and will be useful for a range of applications, such as disaster preparedness and response, soil and geological analysis and monitoring the environment.
Quelle: LompocRecord
.
Update: 11.08.2014
. 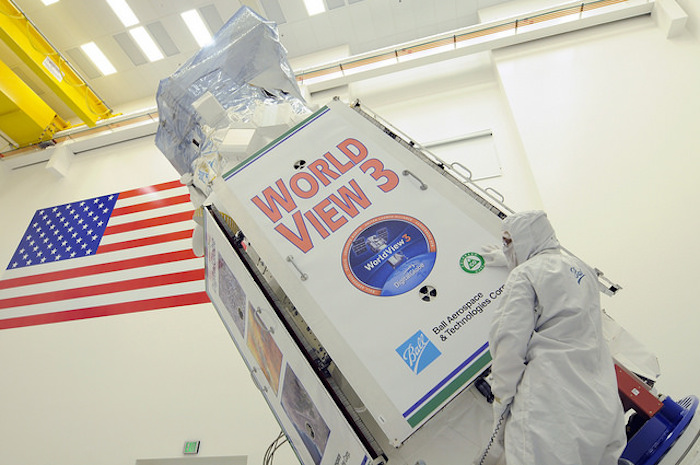 From early 2015, WorldView-3 will provide the finest resolution ever attained by commercial Earth-imaging satellites outside the military.

A few weeks ago, the U.S. Department of Commerce gave permission for DigitalGlobe—the Longmont, Colo.-based provider of commercial space imagery and geospatial content—to collect and sell Earth imagery at resolutions NEVER before allowable under U.S. law. On 11 June, DigitalGlobe was permitted to sell images from its network of satellites at resolutions as fine as 16 inches (40 cm) panchromatic, far higher than the 20 inches (50 cm) previously permitted. On Wednesday, 13 August, when the WorldView-3 satellite is launched into orbit from Vandenberg Air Force Base, Calif., it will lay the groundwork to increase that resolution capability even further. From early 2015, DigitalGlobe will be able to sell geospatial imagery at resolutions never previously obtainable outside the military: as high as 10 inches (25 cm) panchromatic.
The implications are expected to be significant in their scope. As demonstrated in comparative aerial images of the California Academy of Sciences, courtesy of MapBox imagery specialist Charlie Lloyd, an increase from 20 inches (50 cm) to 16 inches (40 cm) from low orbit allows for the greater identification of features such as individual shrubs, the colors of people’s shirts and the reading of smaller road markings. Six months after WorldView-3 is delivered by a United Launch Alliance (ULA) Atlas V rocket into a Sun-synchronous orbit of about 383 miles (617 km) above Earth, it will be in a position to push that imaging envelope yet further to 10 inches (25 cm) panchromatic and 3.3 feet (1 meter) multispectral resolution.
Launch of the Atlas V—which will fly in its “401” configuration, numerically designated to describe a 13-foot-diameter (4-meter) payload fairing, no strap-on rocket boosters and a single-engine Centaur upper stage—is presently targeted to occur from Vandenberg’s Space Launch Complex (SLC)-3E at the start of a 15-minute “WINDOW”, which opens at 11:30 a.m. PDT Wednesday. This pad was most recently employed for the Defense Meteorological Satellite Program (DMSP)-19 mission in April 2014 and has supported dozens of launches since July 1961. According to ULA’s Twitter feed, weather conditions are expected to be 60-percent favorable.
At the time of writing, the impending milestone for the 196-foot-tall (60-meter) Atlas V is an approximately 35-minute rollout from the Vertical Integration Facility (VIF) to the SLC-3E pad surface. This will be followed by a flurry of activity to establish pad connections, perform pneumatic and other checks and verify the performance of the Atlas’ flight control systems. The vehicle will undergo extensive testing of its ground commanding and communications systems and its fuel lines will be purged with inert gaseous nitrogen, ahead of loading its propellants: a mixture of liquid oxygen and a highly REFINED form of rocket-grade kerosene, known as “RP-1”. About an hour before the opening of Wednesday morning’s window, the propellant tanks will be full and liquid oxygen will transition to a “topping” mode, being continuously replenished until near launch time.
After a final poll of the status of all stations, the Launch Director will authorize a “Go for Launch” at the last scheduled hold point at T-4 minutes and the so-called “Terminal Count” will get underway. Under its auspices, the Atlas V’s autosequencer will assume primary command of all vehicle critical functions through liftoff. Liquid oxygen replenishment will come to an end, the fuel and oxidizer VALVES will be closed for flight and propellant tanks will be verified at Flight Pressure.
At T-5 seconds, sound-suppressing water will flood across the SLC-3E pad surface and into the flame trench, in order to minimize reflected energy and acoustic waves at the instant of liftoff. The ignition sequence of the Atlas V’s SINGLE, Russian-built RD-180 engine will commence at T-2.7 seconds, punching out 860,000 pounds (390,000 kg) of thrust, and the vehicle will be committed to flight at 11:30 a.m. PDT. The rocket, whose thrust-to-weight ratio is only 1:16, will lumber off the pad at T+1.1 seconds and climb vertically for the first 16 seconds of the mission. At this stage, the Centaur avionics will command a pitch, roll and yaw program maneuver to actively guide the stack onto the proper flight azimuth to insert the WorldView-3 satellite into its Sun-synchronous orbit of 383 miles (617 km).
About four minutes into the FLIGHT, the RD-180 engine will be shut down and the 41-foot-long (12.4-meter) Centaur and attached WorldView-3 payload will be detached from the rapidly ascending vehicle. The next phase of the flight will incorporate a single “burn” of the Centaur’s 22,300-pound (10,100 kg) RL-10A liquid oxygen/hydrogen engine to establish the satellite in its correct orbit. During this period, the two-piece (or “bisector”) payload fairing will be jettisoned, exposing WorldView-3 to the space environment for the first time, and the satellite will be released into free flight about 19 minutes after launch.
Headquartered in Longmont, Colo., DigitalGlobe was founded in 1992 as WorldView Imaging Corp. by Dr. Walter Scott—who today serves as the company’s executive vice president and chief technical officer—and received the first high-resolution commercial remote sensing satellite license in 1993, under the provisions of the 1992 Land Remote Sensing Policy Act. Two years later, it was renamed EarthWatch, Inc., merging WorldView with the commercial remote sensing operation of the major defense and space CONTRACTOR Ball Aerospace, also based in Colorado. The license from the U.S. Department of Commerce enabled the construction by Ball of the Early Bird-1 satellite, which was delivered into orbit atop a Start-1 booster from the Svobodny Cosmodrome in Russia’s Far East in December 1997. Its imaging payload was designed to deliver a panchromatic resolution of just 9.8 feet (3 meters) and a multispectral resolution of 49 feet (15 meters), but a power system failure caused the satellite to lose communications capability after just four days in flight.
. 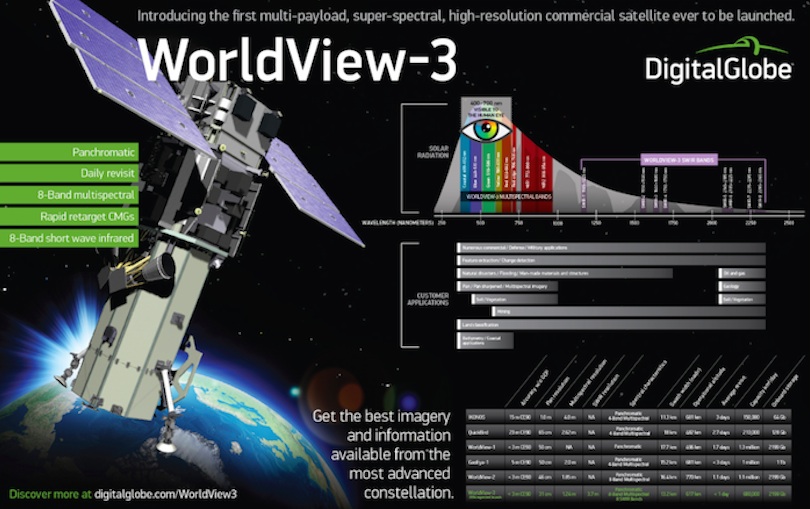 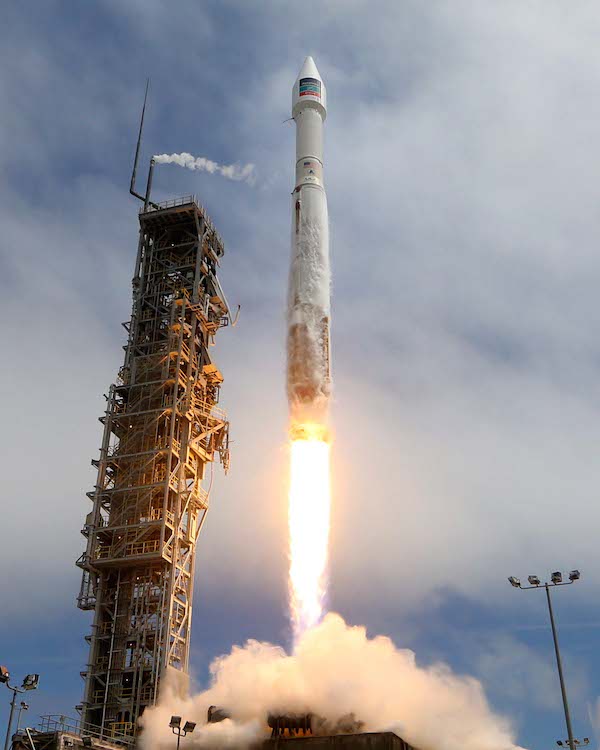 Vandenberg Air Force Base, Calif., (Aug. 13, 2014) – A United Launch Alliance (ULA) Atlas V rocket carrying the WorldView-3 SATELLITE for DigitalGlobe launched at 11:30 a.m. PDT today from Space Launch Complex-3. Lockheed Martin Commercial Launch Services procured the Atlas V for this mission. This is the fourth successful launch in six weeks and the 87th successful mission since ULA was formed in December 2006.
“Congratulations to our commercial mission partners Lockheed Martin Commercial Launch Services and Digital Globe for today’s spectacular launch of the Atlas V carrying the WorldView-3 SATELLITE,” said Jim Sponnick, ULA vice president, Atlas and Delta Programs. “The team’s dedication to mission success, one launch at a time, brought us to today’s successful launch, delivering WorldView-3 to provide the next generation in earth imaging capabilities for DigitalGlobe.”
This mission was launched aboard an Atlas V 401 configuration vehicle, which includes a 4-meter-diameter payload fairing.  The Atlas booster for this mission was powered by the RD AMROSS RD-180 engine, and the Centaur upper stage was powered by a SINGLE Aerojet Rocketdyne RL10A engine.
“This launch marks ULA’s tenth successful launch of fifteen planned this year,” said Sponnick.  “The ULA team remains focused mission success and on-time deliveries for our customer’s most valuable payloads.”
WorldView-3 is the first multi-payload super-spectral, high resolution commercial SATELLITE for earth observations and advanced geospatial solutions. This high spatial resolution multispectral satellite imagery is used for civil government mapping, land use planning, disaster relief, exploration, defense, intelligence, visualization and simulation environments.
ULA's next launch is the Atlas V CLIO mission for the U.S. government from Space Launch Complex-41 at Cape Canaveral Air Force Station, Florida.
With more than a century of combined heritage, United Launch Alliance is the nation’s most experienced and reliable launch service provider. ULA has successfully delivered more than 80 satellites to orbit that provide critical capabilities for troops in the field, aid meteorologists in tracking severe weather, enable personal device-based GPS navigation and unlock the mysteries of our SOLAR SYSTEM. ULA – Bringing rocket science down to Earth.
Quelle: ULA