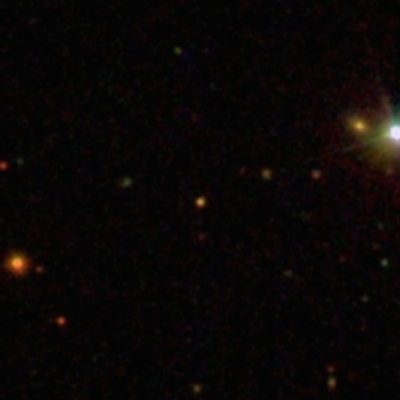 FAINT AND FAR: Lying 890,000 light-years from Earth, the ruddy star at center is the most distant object ever seen in our galaxy.
.
Just as every planet in the SOLAR SYSTEM orbits the sun, so every star in the Milky Way orbits the big black hole at our galaxy's center. But how far out does the Milky Way extend? Astronomers are closer to answering that question with the discovery of two remote giant stars. "They're the most distant stars that we've ever seen in our Milky Way," says John Bochanski of Haverford College, the astronomer who found them. The two stars probe an unexplored region of space and should help gauge our galaxy's total mass, which is poorly known.
Both stars are red giants, aging suns that shine so brightly OBSERVERS can see them from afar. One star is about 890,000 light-years from Earth in the constellation Pisces—33 times farther from the Milky Way's center than we are and well beyond the edge of the galactic disk. The only other Milky Way member at a comparable distance is a small galaxy named Leo I, which orbits ours at a distance of 850,000 light-years. If the star in Pisces revolves on a circular path as fast as we do, it takes some eight billion years to complete a SINGLE orbit around the galaxy. That's more than half the age of the universe.
The other newfound star is about 780,000 light-years distant in the constellation Gemini and more than a million light-years from the other star. For comparison, the previous record-breaking individual star was only about half a million light-years from Earth.
Astronomer Rosemary Wyse of Johns Hopkins University, who was not one of the researchers, praises the new work. "They've proven that there are stars way out in the boonies," she says. "It's just fascinating." The project has only just begun, so it will likely turn up more such stars. "It is going to be very important for a whole range of science topics," Wyse says.
To seek the Milky Way’s farthest-flung residents Bochanski's team started with nearly seven million stars, using near-infrared data to select those whose colors match spectral type M, which DESIGNATES stars that are cool and red. By applying other criteria, the astronomers winnowed down the list to 404 M-type stars. Last November, Bochanski obtained spectra of a handful of these. Most turned out to be mere red dwarfs—feeble suns nearby in the galaxy's disk—but five were M giants, two of which were so dim they had to be extremely far from Earth. The finding appears in the July 20 issue of The Astrophysical Journal Letters.
But the discovery raises a question: "What in heaven's name is an M giant doing out there?" asks John Norris of The Australian National University, an astronomer unaffiliated with the research team. Near the end of its life a star like the sun expands and cools; our sun will become a yellow giant of spectral type G and then an orange giant of type K before turning into a cooler red M giant. But the stars in the Milky Way's halo—the ancient population that envelopes the galaxy's disk—differ from the sun, because they have a much lower abundance of heavy elements. When such stars become giants, they don't get cooler than type K. The two M giants are therefore abnormally metal-rich for the halo, like MILLIONAIRES living in an impoverished countryside.
They may have come from another galaxy. Indeed, some two dozen galaxies orbit our own. The two brightest SATELLITE galaxies—the Large and Small Magellanic Clouds—have lots of stars, which have created so many heavy elements that giant stars there do become red and type M. In contrast, most of the other satellites are so puny they lack the star power to manufacture a plethora of heavy elements, so they lack M giants. Thus, Bochanski suspects that the two remote M giants may have originated in a larger-than-average satellite galaxy. But such a galaxy should be LUMINOUSenough to see. Perhaps it has disintegrated. Or perhaps each distant M giant is the brightest star in a galaxy so diffuse we don't yet know about its existence.
In any case, additional stars at such great distances could reveal the Milky Way's mass, because the more massive a galaxy is the faster its stars whirl around it, and the best stars for measuring the total mass are the ones farthest out. So even though the newfound stars may not be native to the Milky Way, they could unveil its WEIGHTbetter than all the many stars that light its brilliant disk.
Quelle: Scientific America
2429 Views
Created with page4