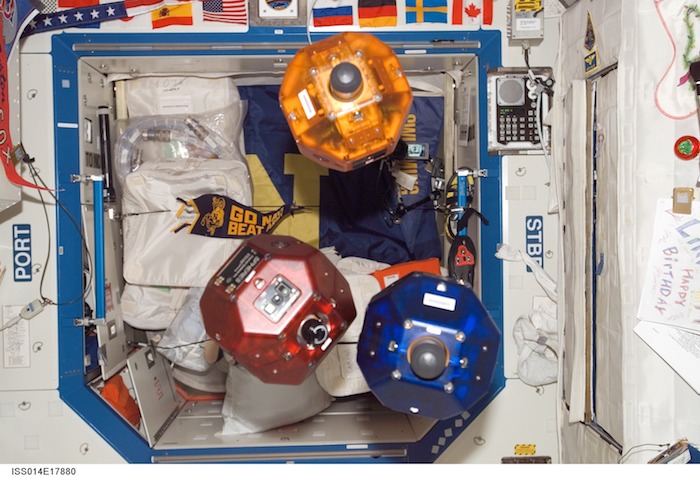 Three satellites fly in formation as part of the Synchronized Position Hold, Engage, Reorient, Experimental Satellites (SPHERES) investigation. This image was taken during Expedition 14 in the Destiny laboratory module.

Inspired by science fiction, three bowling ball-size free-flying Synchronized Position Hold, Engage, Reorient, Experimental Satellites (SPHERES) have been flying inside the International Space Station since 2006. These satellites provide a test bed for development and research, each having its own power, propulsion, computer, navigation equipment, and physical and electrical connections for hardware and sensors for various experiments.
Aboard Orbital Sciences Corp.'s second contracted commercial resupply mission to the space station, which arrived to the orbital laboratory July 16,  NASA's Ames Research Center in Moffett Field, California, sent two Google prototype Project Tango smartphones that astronauts will attach to the SPHERES for technology demonstrations inside the space station. By connecting a smartphone to the SPHERES, it becomes "Smart SPHERES, " a more "intelligent" free-flying robot with built-in cameras to take pictures and video, sensors to help conduct inspections, powerful computing units to make calculations and Wi-Fi connections to transfer data in real time to the computers aboard the space station and at mission control in Houston.
For the first Smart SPHERES experiments in 2011, a Nexus S was launched to the station on the final flight of space shuttle Atlantis. For the upcoming experiments, the features of the Project Tango phone add new capabilities to increase the options of what researchers can do with the SPHERES platform.
In a two-phase experiment, astronauts will manually use the smartphones to collect visual data using the integrated custom 3-D sensor to generate a full 3-D model of their environment. After the map and its coordinate system are developed, a second activity will involve the smartphones attached to the SPHERES, becoming the free-flying Smart SPHERES. As the free-flying robots move around the space station from waypoint to waypoint, utilizing the 3-D map, they will provide situational awareness to crewmembers inside the station and flight controllers in mission control. These experiments allow NASA to test vision-based navigation in a very small mobile product.
“NASA uses robots for research and mission operations; just think about the rovers on Mars or the robotic arm on the ISS or space shuttle," said Chris Provencher, manager of the Smart SPHERES project. "Inside the ISS space is limited, so it’s really exciting to see technology has advanced enough for us to demonstrate the use of small, mobile robots to enhance future exploration missions."
Ultimately it is the hope of researchers that these devices will perform housekeeping-type tasks, such as video surveys for safety and configuration audits, noise level measurements, air flow measurements, and air quality measurements, that will offset work the astronauts currently perform.
The SPHERES facility is managed under NASA's Human Exploration and Operations Mission Directorate, Advanced Exploration Systems division. The Smart SPHERES project and SPHERES facility are managed under the Intelligent Robotics Group at NASA Ames, with participation from NASA’s Johnson Space Center in Houston and NASA's Jet Propulsion Laboratory in Pasadena, California.
. 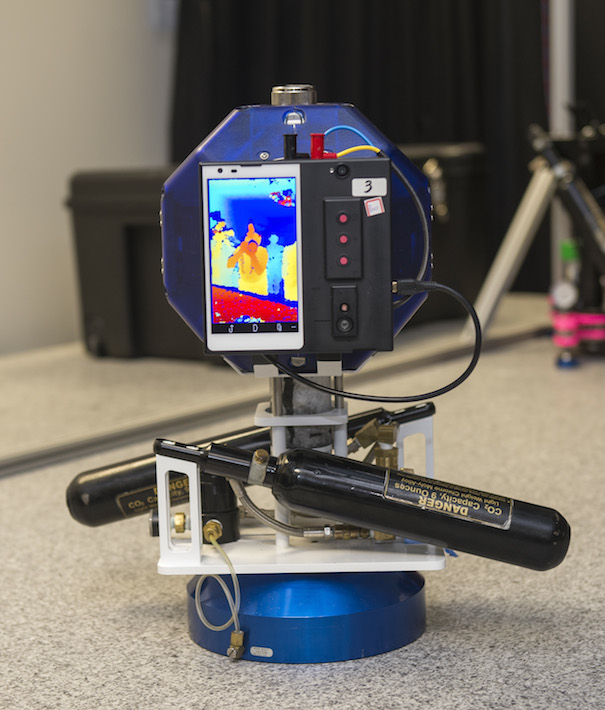