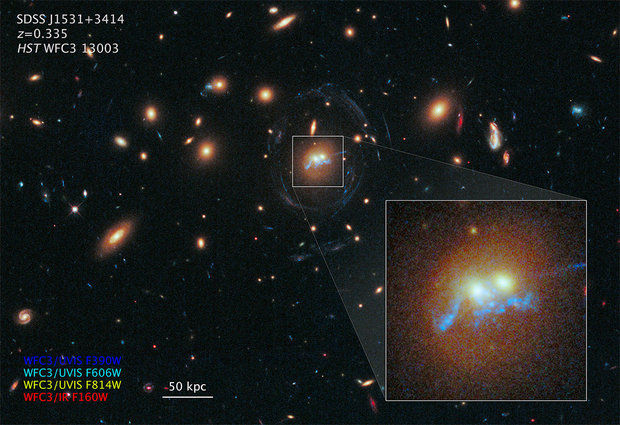 NASA's Hubble Space Telescope photographed a 100,000-light-year-long structure that looks like a string of pearls twisted into a corkscrew shape winds around the cores of the two massive galaxies. The “pearls” are superclusters of blazing, blue-white, newly born stars. (NASA/European Space Agency)

Astronomers are using words like "awesome" and "exciting" to describe the implications of a recent Hubble Space Telescope photograph. The photograph – wrap your head around this – shows a structure 100,000 light years long made of two colliding galaxies linked by a corkscrewing string of newly born stars.
You can't find a mundane explanation for this," German astronomer Grant Tremblay said in a NASA statement.
Scientists have seen the "beads on a string" phenomenon before on the arms of spiral galaxies and between galaxies. They've never seen one corkscrewing through two giant, merging galaxies.
Scientists have three possible explanations for the phenomenon and will try to figure which one is correct. Whatever the origin of the chain, Tremblay said "the result is awesome."
Quelle: The Huntsville Times.
.

New Hubble Space Telescope ultraviolet and optical imaging of the strong-lensing galaxy cluster SDSS J1531+3414 (z=0.335) reveals two centrally dominant elliptical galaxies participating in an ongoing major merger. The interaction is at least somewhat rich in cool gas, as the merger is associated with a complex network of nineteen massive superclusters of young stars (or small tidal dwarf galaxies) separated by ~1 kpc in projection from one another, combining to an estimated total star formation rate of ~5 solar masses per year. The resolved young stellar superclusters are threaded by narrow H-alpha, [O II], and blue excess filaments arranged in a network spanning ~27 kpc across the two merging galaxies. This morphology is strongly reminiscent of the well-known "beads on a string" mode of star formation observed on kpc-scales in the arms of spiral galaxies, resonance rings, and in tidal tails between interacting galaxies. Nevertheless, the arrangement of this star formation relative to the nuclei of the two galaxies is difficult to interpret in a dynamical sense, as no known "beads on a string" systems associated with kpc-scale tidal interactions exhibit such lopsided morphology relative to the merger participants. In this Letter we present the images and follow-up spectroscopy, and discuss possible physical interpretations for the unique arrangement of the young stellar clusters. While we suggest that this morphology is likely to be dynamically short-lived, a more quantitative understanding awaits necessary multiwavelength follow-up, including optical integral field spectroscopy, ALMA sub-mm interferometry, and Chandra X-ray imaging.
Quelle: Cornell University Library, Ithaca, NY 14853
Astronomie
« Zum vorherigen Eintrag Zum nächsten Eintrag »
2927 Views
Created with page4