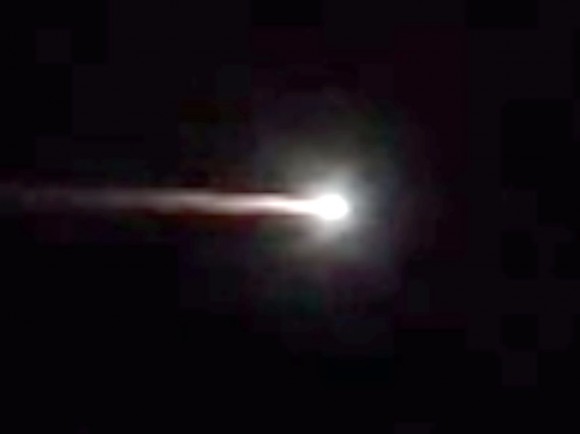 10.07.2014 - Frame grab from a Youtube video of the brilliant meteor that flared over Australia overnight.
“It first looked like a plane with fire coming out of the tail.” – Aaron O.
“I have never seen anything like it. Big, bright and moving gently across sky – slower than a plane, not falling at all but moving across.” – Shannon H.
.
“Viewed from cockpit of aircraft at 37,000′. Was visible for two or three minutes.” – Landy T.
Flaming plane? Incandescent visitor from the asteroid belt? As the these comments from the AMS Fireball Log attest, the brilliant and s-l-o-w fireball that seared the sky over  southeastern Australia tonight was probably one of the most spectacular displays of re-entering space junk witnessed in recent years.
Ted Molczan, citizen satellite tracker and frequent contributor to the amateur satellite watchers SeeSat-L site, notes that the timing and appearance almost certainly point to the decay or de-orbiting of the Russian Soyuz 2-1B rocket booster that launched the meteorological satellite Meteor M2 on July 8.
.
Frams von Video:
.

Meteor over New South Wales. Look closely near the end and you’ll see it disintegrate into small pieces.
The magnificent man-made meteor, weighing some 4,400 pounds (2,000 kg), was seen from Melbourne to Sydney across the states of Victoria and New South Wales around 10 p.m. Hundreds of people were stopped in their tracks.  Most noticed how slowly the fireball traveled and how long it continue to burn on the way down.
Spacecraft that reenter from either orbital decay or controlled entry usually break up at altitudes between 45-52 miles (84-72 km) traveling around 17,500 mph (28,000 km/hour) . Compression and friction from the ever-thickening air cause the craft, or in this case, the rocket booster, to slow down and heat up to flaming incandescence just like a hunk of space rock arriving from the asteroid belt. In both cases, we see a brilliant meteor, however manmade debris.
Reportedly, only one person has been struck by satellite debris. In 1997 Lottie Williams of Tulsa, Oklahoma was hit on the shoulder while walking by a small, twisted piece of metal weighing as much as a crushed soda can. It was traced back to the tank of a Delta II rocket that launched a satellite in 1996. I suppose it’s only a matter of time before someone else gets hit, but the odds aren’t great. More likely, you’ll see what alarmed and delighted so many southeastern Australians Thursday night: a grand show of disintegration.
Quelle: UT
.
Update: 11.07.2014
.

Fiery object that travelled in eastern Australian night skies believed to be space junk, not meteor 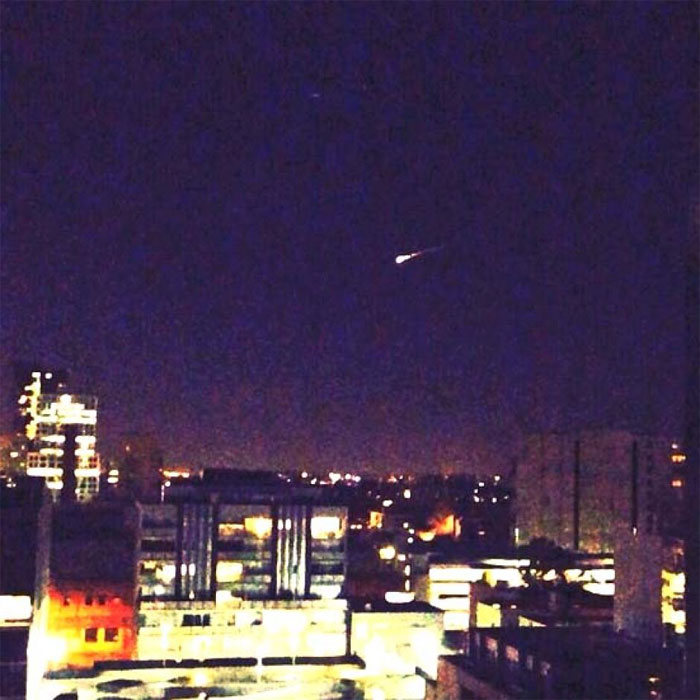 A leading Melbourne astronomer says an object that lit up eastern Australian skies last night was not a meteor but instead a piece of space junk.
Pilots, air traffic controllers and members of the public spotted the bright light streaking across the sky about 10:00pm.
But Melbourne Planetarium curator Dr Tanya Hill says it was space junk, not a meteor.
"What was really interesting about it was it was so bright and observers have reported being able to see it for more than 10 seconds or so," she said.
"That tells us that it was something probably more out of the ordinary than just a small meteor.
"This is ... what you would call an artificial meteor, caused by material we may well have sent up in space."
Dr Hill says NASA tracks more than 500,000 pieces of space junk that measure greater than the size of a marble.
"Narrowing down what it might be is actually going to be a really tough ask," she said.
"Probably about once a day a piece of space junk ... flies through our atmosphere. We were just lucky to be able to witness it last night."
Airservices Australia spokesman Paul Sadler says colleagues who saw the activity last night described it as a spectacular sight.
"Some controllers are looking at radar screens but those controllers looking out to the runways certainly could see it," he said.
"It was reported from northern NSW down to Hobart and it was in the north-western part of the sky.
"I'd be suggesting it was sort of somewhere over NSW."
Mr Sadler says some people who spotted the light confused the unusual sight for an aircraft in trouble.
"It's understood there were a number of triple-zero calls to emergency services possibly reporting a plane in trouble but that certainly wasn't the case," he said.
"A number of pilots flying in that airspace reported it to ... air traffic controllers [and said] it was just a spectacular sight." 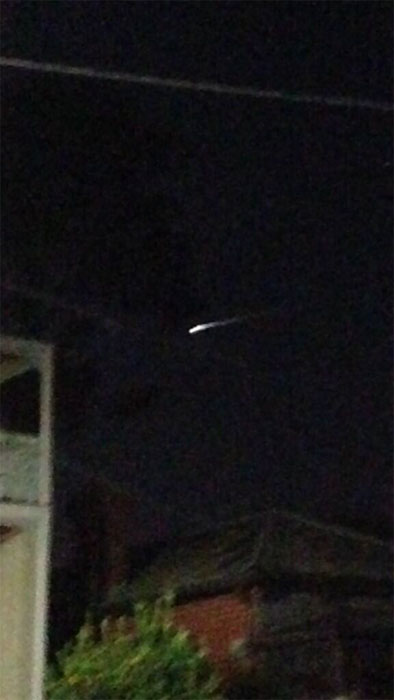 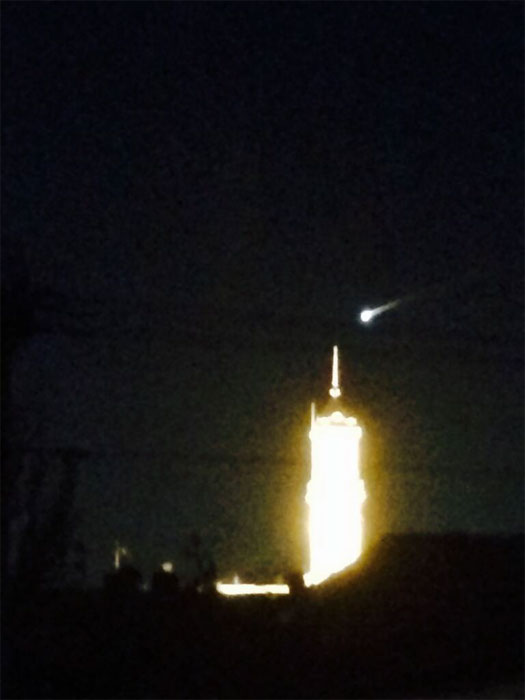 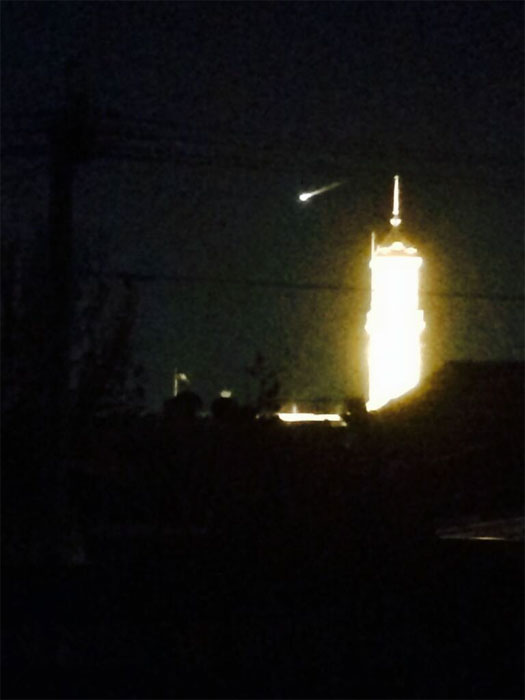 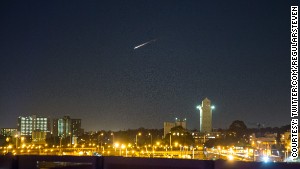 Steven Wright saw the fireball Thursday, july 10: I was walking around Docklands taking photos on Thursday night, and while trying to frame a photo of the Melbourne Star, I saw this bright white dot flying across the sky with a massive tail. I had no idea what it was, and at first I thought it was a low flying jet with some wild vapor trails, because it was moving that fast. But because there was no sound, and it didn't make sense to see a vapor tail it behind the plane at night, I knew it had to be something else - I just didn't know what it was. It's actual speed was hard to articulate - it was slow looking, but had to be fast. It must have been pretty far away, as it moved across the sky, and all up, I think I saw it for about 30/45 seconds, and then it just faded away. Fair to say, I was concerned about what it was, and kept an eye on it until I couldn't see it, but all seemed to be okay."
Quelle: CNN
.
« Zum vorherigen Eintrag Zum nächsten Eintrag »
2986 Views
Created with page4