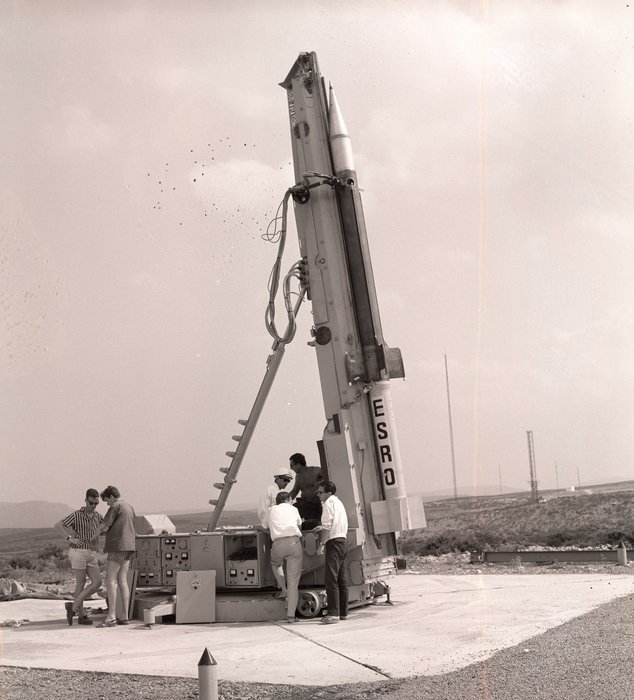 Fifty years ago this week, ESRO’s first sounding rockets were launched from the Salto di Quirra range in Sardinia, Italy, on 6 and 8 July 1964.
The sounding rocket programme played an important part in the early life of ESRO. It provided opportunities for research during the long waiting period until the first satellites were orbited, and established a nucleus around which a European space science community could grow and accumulate technical knowhow. The very nature of the work at the time generated durable bonds of friendship and solidarity.
The challenge facing the ‘founding fathers’ of ESRO was to devise a scientific programme that would be of benefit to scientists and governments with very different levels of resources (human, financial and industrial). The result was a scientific programme that foresaw the launch over 400 sounding rockets and 17 satellites in the first eight years, a wildly optimistic scenario given available resources and the experience in Europe at the time.
In just one year since Edoardo Amaldi and Pierre Auger had sketched their ideas, European scientists had come up with an ambitious and exciting collaborative programme for an autonomous European presence in space. A European Space Research Study Group (GEERS) was needed to first give more substance to their plans. It was set up in June 1960.
Defining a scientific programme
Five working groups were tasked to define the administrative framework of a new space agency, as well as its scientific and technical priorities. They produced a draft document that was then submitted to a high-level meeting of scientific and government officials that met at CERN from 28 November to 1 December, 1960. The delegates at Meyrin no longer thought of having a single organisation for the European space effort.
In October 1961, COPERS’s scientific working group presented its programme in a 77-page ‘Blue Book’, so named after the colour of its cover, defining an eight-year plan. The package was accepted with only minor modifications by the government representatives that signed the ESRO Convention in June 1962. Three major categories of experiments for the new European organisation in that period were identified: short-term projects based on the use of sounding rockets, medium-term projects requiring small satellites and space probes, and long-term projects involving the use of larger and more complex spacecraft.
No less than 75 experiment proposals using sounding rockets were suggested. Their launch rate was planned to increase incrementally reaching 65 per year by the third year, with a standard launch lofting 50 kg to an altitude of 150 km. There was considerable enthusiasm for developing a northern launching range near the Kiruna Geophysical Observatory, and which could be used for the investigation of the upper atmosphere phenomena in the auroral zone.
About 75 experiments were also suggested for the medium-term programme. Here the Blue Book envisaged launching two small satellites by ESRO’s fourth year and three small satellites and/or deep space probes per year from the fifth year onwards. The long-term programme allowed for two large satellites from the sixth year onwards (so six in all).
Implementing the sounding rocket programme
The sounding rocket programme was relatively free of the tensions that would come to surround the choice of satellites and their payloads. Large sections of the broad field could be covered at relatively low cost. Individual researchers, small groups or graduate students could have an experiment flown relatively quickly, rather than having to wait years to launch something into outer space. Sounding rockets provided a useful means for novices to cut their teeth in a new and challenging domain.
The first ESRO launches were from the Salto di Quirra range in Sardinia, Italy in July 1964. These were boosted British Skylark sounding rockets carrying a canister that released barium and ammonium clouds into the ionosphere. The experimental payloads were provided by researchers in Belgium and Germany. The first launches from Esrange took place in November 1966. When ESRO’s official sounding rocket programme ended in 1972, about a half of all rocket launches made by the organisation had been from Kiruna. Other frequently used ranges were the Italian base in Sardinia and the Norwegian base in Andøya.
Britain’s Skylark and France’s Centaure were the workhorses of the programme, supplemented by the American Arcas. Of the 168 launches carried out between 1964 and 1972, about half were dedicated to ionospheric and auroral studies and about a quarter to atmospheric physics.
These campaigns were adventures, and those who took part in them still recount with pleasure the many unforgettable experiences that they had. This was the world of 'little science', with relatively small budgets, short delays from payload approval to launch, and with that sense of involvement which came from having hands-on experience of the design, construction, test and launch of flight hardware. All the ingredients for building a community tied together by strong bonds of professional and personal allegiance were present.
This was a vanishing world, which would soon transform into the anonymous organisation of large and complex technological projects. Indeed as sounding rockets became increasingly sophisticated, as failure became more scientifically, financially and personally costly, so were the risks reduced. But at a price. Sounding rocket activity was institutionalised, leaving its pioneers to look back with nostalgia on those early days in which together they laid the foundations of ESRO’s space science community.
Quelle; ESA
Raumfahrt
« Zum vorherigen Eintrag Zum nächsten Eintrag »
3099 Views
Created with page4