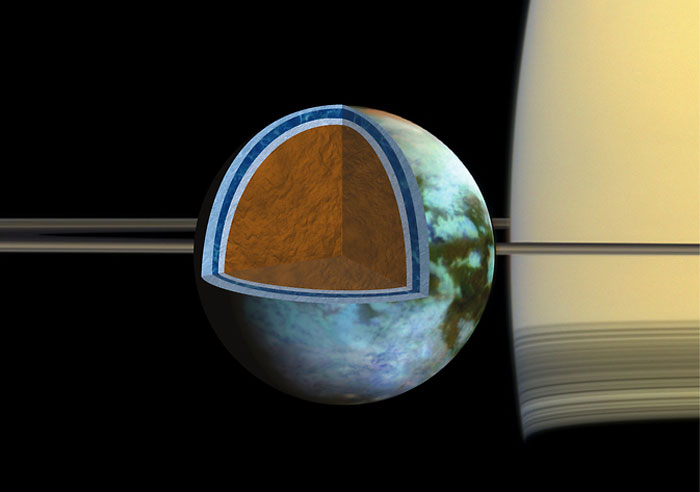 Researchers found that Titan's ice shell, which overlies a very salty ocean, varies in thickness around the moon, suggesting the crust is in the process of becoming rigid.

Scientists analyzing data from NASA’s Cassini mission have firm evidence the ocean inside Saturn's largest moon, Titan, might be as salty as the Earth's Dead Sea.
The new results come from a study of gravity and topography data collected during Cassini's repeated flybys of Titan during the past 10 years. Using the Cassini data, researchers presented a model structure for Titan, resulting in an improved understanding of the structure of the moon's outer ice shell. The findings are published in this week’s edition of the journal Icarus.
"Titan continues to prove itself as an endlessly fascinating world, and with our long-lived Cassini spacecraft, we’re unlocking new mysteries as fast as we solve old ones," said Linda Spilker, Cassini project scientist at NASA's Jet Propulsion Laboratory (JPL) in Pasadena, California, who was not involved in the study.
Additional findings support previous indications the moon's icy shell is rigid and in the process of freezing solid. Researchers found that a relatively high density was required for Titan's ocean in order to explain the gravity data. This indicates the ocean is probably an extremely salty brine of water mixed with dissolved salts likely composed of sulfur, sodium and potassium. The density indicated for this brine would give the ocean a salt content roughly equal to the saltiest bodies of water on Earth.
"This is an extremely salty ocean by Earth standards," said the paper's lead author, Giuseppe Mitri of the University of Nantes in France. "Knowing this may change the way we view this ocean as a possible abode for present-day life, but conditions might have been very different there in the past."
Cassini data also indicate the thickness of Titan's ice crust varies slightly from place to place. The researchers said this can best be explained if the moon's outer shell is stiff, as would be the case if the ocean were slowly crystalizing, and turning to ice. Otherwise, the moon's shape would tend to even itself out over time, like warm candle wax. This freezing process would have important implications for the habitability of Titan's ocean, as it would limit the ability of materials to exchange between the surface and the ocean.
A further consequence of a rigid ice shell, according to the study, is any outgassing of methane into Titan's atmosphere must happen at scattered "hot spots" -- like the hot spot on Earth that gave rise to the Hawaiian Island chain. Titan's methane does not appear to result from convection or plate tectonics recycling its ice shell.
How methane gets into the moon's atmosphere has long been of great interest to researchers, as molecules of this gas are broken apart by sunlight on short geological timescales. Titan's present atmosphere contains about five percent methane. This means some process, thought to be geological in nature, must be replenishing the gas. The study indicates that whatever process is responsible, the restoration of Titan's methane is localized and intermittent.
"Our work suggests looking for signs of methane outgassing will be difficult with Cassini, and may require a future mission that can find localized methane sources," said Jonathan Lunine, a scientist on the Cassini mission at Cornell University, Ithaca, New York, and one of the paper's co-authors. "As on Mars, this is a challenging task."
Quelle: NASA
Astronomie
« Zum vorherigen Eintrag Zum nächsten Eintrag »
3072 Views
Created with page4