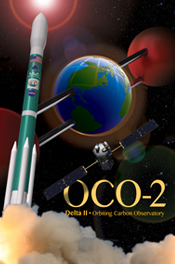 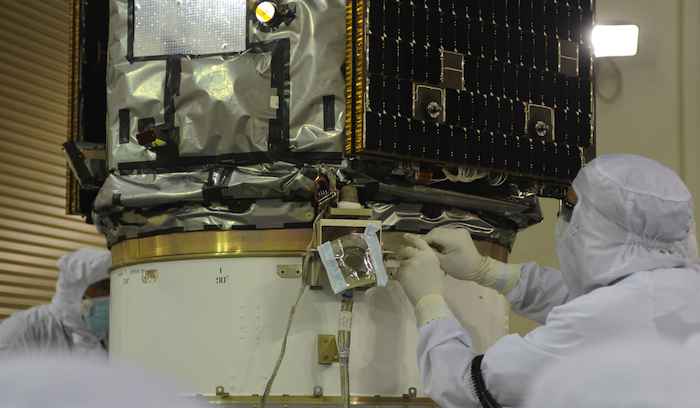 The launch of NASA's Orbiting Carbon Observatory-2 mission (OCO-2) at Vandenberg Air Force Base (VAFB) in California, is scheduled for Tuesday, July 1. Liftoff from Space Launch Complex 2 aboard a United Launch Alliance Delta II rocket at VAFB is targeted for 2:56 a.m. PDT (5:56 a.m. EDT) at the opening of a 30-second launch window.
OCO-2 is NASA's first mission dedicated to studying atmospheric carbon dioxide, the leading human-produced greenhouse gas driving changes in Earth's climate. OCO-2 will provide a new tool for understanding the human and natural sources of carbon dioxide emissions and the natural "sinks" that absorb carbon dioxide and help control its buildup.
The observatory will measure the global geographic distribution of these sources and sinks and study their changes over time.
The spacecraft's final circular polar orbit will be 438 nautical miles (705 kilometers) at an inclination of 98.2 degrees.
On launch day, July 1, NASA TV launch commentary coverage of the countdown will begin at 12:45 a.m. PDT (3:45 a.m. EDT). Launch is targeted for 2:56 a.m. PDT (5:56 a.m. EDT). The flight azimuth of the Delta II after liftoff will be 196 degrees. Spacecraft separation from the rocket occurs 56 minutes, 15 seconds after launch.
Quelle: NASA
.
Update: 28.06.2014
. 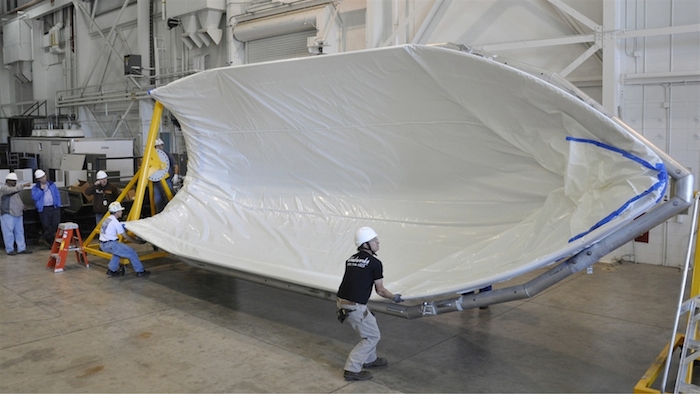 A United Launch Alliance Delta 2 rocket, one of four remaining medium-class Delta rockets, is being prepared for a July 1 liftoff at Vandenberg Air Force Base in California to put a long-awaited NASA environmental satellite into orbit.
Launch of the Orbiting Carbon Obsevatory-2, or OCO-2, is scheduled for 2:56 a.m. PDT/0956 GMT from Vandenberg’s Space Launch Complex 2, which was last used two and a half years ago.
United Launch Alliance has three more Delta 2 missions on its manifest, all for NASA and all flying from Vandenberg.
“The market forecast for launch services in the Delta 2 medium-class dropped off dramatically,” United Launch Alliance spokeswoman Jessica Rye wrote in an email to Sen.
The major user for Delta 2 in the 1990s was the U.S. Air Force’s Global Positioning System program, Rye added.
“Considering the small number of potential launch services in this class, it was decided that it would not be cost-effective to continue a separate Delta 2 product line,” she said.
If new markets develop, United Launch Alliance could produce medium-class versions of its Atlas 5 or Delta 4 rockets, Rye added.
NASA hired Orbital Sciences Corp to fly the original OCO on a Taurus booster, but the spacecraft was lost in February 2009 when its protective shroud failed to separate from the rocket during ascent.
NASA won funding for a replacement satellite and in 2012 decided to switch to the Delta 2 launcher.
“With the complete loss of the original OCO mission, there was heartbreak,” project manager Ralph Basilio, with NASA’s Jet Propulsion Laboratory in Pasadena, Calif., told reporters during a prelaunch press conference.
“We’re excited about this opportunity to finally be able to complete some unfinished business,” he said.
Once in orbit 705 km above Earth and inclined 98.2 degrees relative to the equator, OCO-2 is designed to make global measurements of carbon dioxide, a greenhouse gas tied to climate change.
“The data we will provide will help our decision-makers … to be better equipped to understand carbon dioxide’s role in climate change because OCO-2 will be measuring this greenhouse gas globally,” said Betsy Edwards, program executive at NASA Headquarters in Washington, DC.
Added Basilio, “In principle we fully expect to be able to see points where there are large (carbon dioxide) emissions, compared to points nearby, but this is really not a mapping mission. This is much more of a sampling mission.”
The OCO-2 mission, which costs $465 million, is designed to last at least two years.
Quelle: SEN
.
Update: 30.06.2014
.

Managers gave a “go” to proceed toward the launch of OCO-2 at the conclusion of today’s Launch Readiness Review. The spacecraft is sealed atop a United Launch Alliance Delta II rocket set to lift off from Space Launch Complex 2 on Tuesday, July 1 at 2:56 a.m. PDT, 5:56 a.m. EDT. Tuesday, July 1,  at Vandenberg Air Force Base in California. There are no issues or concerns with either the observatory or the rocket, and weather is not expected to be a problem.
Monday is L-1, meaning “one day before launch.” That’s when RP-1 fuel will be loaded aboard the Delta II’s first stage, followed by rollback of the gantry-like mobile service tower surrounding the vehicle (pictured). Cryogenic liquid oxygen loading is scheduled to start early Tuesday, at 1:11 a.m. PDT, setting the stage for liftoff at 2:56 a.m.
Quelle: NASA
.
Update: 1.07.2014
.
Final Launch Preps Under Way for OCO-2
.
Final launch countdown preparations continue on schedule today for the liftoff of the United Launch Alliance Delta II rocket carrying NASA’s Orbiting Carbon Observatory-2.  At Space Launch Complex 2 this afternoon the RP-1 fuel, a highly refined kerosene, is to be loaded into the launch vehicle’s first stage. Then the mobile service tower, or the gantry, will be rolled back from around the rocket.  This is targeted for about 4:10 p.m.Pacific time as soon as the launch vehicle preparations are complete. The countdown for launch will begin at 11:56 p.m.  After a weather briefing, cryogenic loading of liquid oxygen into the Delta II first stage will begin at 1:11 a.m.  Liftoff is targeted for the opening of a 30-second launch window that occurs at 2:56:44 a.m. Pacific time, 5:56 a.m. Eastern.
The weather forecast is essentially unchanged and calls for a 100 percent chance of acceptable conditions at launch time. At liftoff time the temperature will be near 52 degrees, winds from the Northwest at 5-8 knots and a visibility of 1 to 2 miles in coastal fog.
. 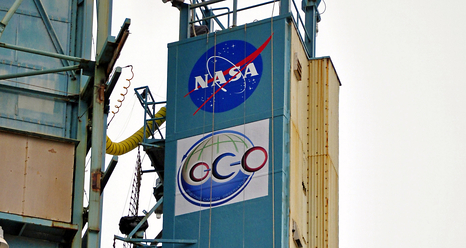 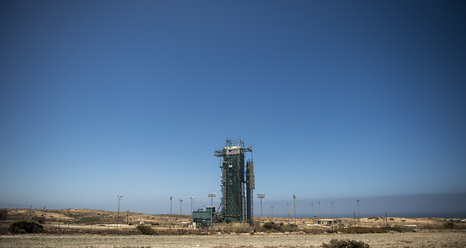 Quelle: NASA
...
Update: 23.00 MESZ
NASA/United Launch Alliance Statement on OCO-2 Scrub
The launch of a United Launch Alliance Delta II carrying NASA’s Orbiting Carbon Observatory-2 (OCO-2) satellite was scrubbed today due to an issue with the water suppression system that is used to flow water on the launch pad to dampen the acoustic energy during launch.
Pending the outcome of troubleshooting, the launch is rescheduled for Wednesday, July 2 from Space Launch Complex-2 at Vandenberg Air Force Station, Calif., The launch time is 2:56 a.m. PDT at the opening of a 30-second window. The forecast for July 2 shows a 100 percent chance of favorable weather conditions for the launch.
Quelle: NASA
.
Update: 2.07.2014
. 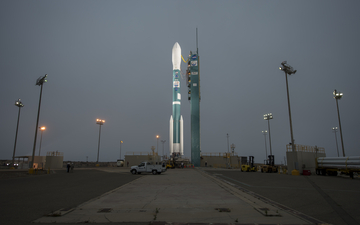 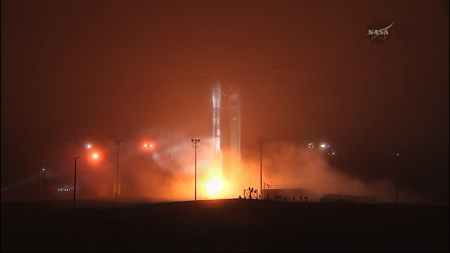 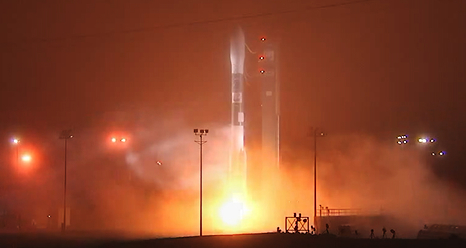 A Delta II rocket blazed off the launch pad at Vandenberg Air Force Base in California early Wednesday morning to begin a landmark mission to survey carbon dioxide gas in Earth's atmosphere.
NASA's Orbiting Carbon Observatory-2, or OCO-2, is expected to provide insight into how the planet adjusts to the increased production of carbon dioxide from a vantage point in orbit that will allow it to take readings on a scale never achieved before.
While ground stations have been monitoring carbon dioxide concentrations, OCO-2 will be the first spacecraft to conduct a global-scale reading over several seasons. The spacecraft is expected to produce detailed readings to provide regional sources of carbon dioxide as well as sinks for the greenhouse gas.
"There's quite a lot of urgency to see what we can get from a satellite like OCO-2," said David Crisp, the science team lead for the mission.
The spacecraft flew into orbit aboard a United Launch Alliance Delta II rocket launched from Vandenberg Air Force Base in California. The July 2 liftoff came at 5:56 a.m. Eastern time, 2:56 Pacific time. The hexagonal spacecraft is about 6 feet long and 3 feet in diameter and weighs 985 pounds. The Delta II first stage's single liquid-fueled engine ignited moments before the three solid-fueled boosters roared to life to catapult the rocket and spacecraft off the pad toward space.
The launch was from the west coast so the spacecraft could enter a polar orbit of the Earth, a flight path that will see it cross over the Arctic and Antarctic regions during each revolution and get a complete picture of the Earth. It will fly about 438 miles above the planet's surface to take its readings.
"The only way to accomplish a polar orbit from U.S. soil is to launch from Vandenberg," said Tim Dunn, NASA's launch manager for the flight.
The mission is the first of its kind in the agency's extensive history of Earth-observing spacecraft. The spacecraft was launched to replace the first OCO that did not make it into orbit due to an anomaly in February 2009. The spacecraft carries one instrument and its sole focus is detecting carbon dioxide and watching from space as the Earth "breathes" to see what becomes of the gas.
The instrument is precise enough that researchers will be able to count the number of carbon dioxide molecules in the layers of the atmosphere and use the data to draw conclusions about how the increasing amount of gas will affect things like the global temperature. OCO-2's mission is to last at least two years.
NASA's Launch Services Program, based at Kennedy Space Center in Florida, managed the launch preparation and flight into orbit. The OCO-2 mission is handled by the Jet Propulsion Laboratory in California.
"We've been preparing for the OCO-2 mission for almost two years now," Dunn said before launch. "The biggest challenge has been in bringing the Delta II launch vehicle out of retirement. The last time we launched on a Delta II was October 2011, a weather satellite."
The Delta II has been one of NASA's most reliable launchers ever, registering more than 150 launches for NASA, the Air Force and commercial satellite makers from 1989 to 2011.
The launch team has been visiting Vandenberg during the preparation and spent the two weeks before launch there, running through the last phases of processing and countdown rehearsals.
With the mission safely begun, Dunn congratulated the team soon after OCO-2 separated from the Delta II's second stage and opened its pair of solar array wings.

Quelle: NASA
.
Update: 3.07.2014
.
CARBON OBSERVATORY LAUNCHED: Yesterday morning at 2:56 AM PDT, NASA's Orbiting Carbon Observatory-2 (OCO-2) blasted into space from the Vandenberg AFB in California. After liftoff, the exhaust from the satellite's Delta II rocket glowed so brightly that Juan Perez was able to see it 500 miles away in Wittmann, Arizona: 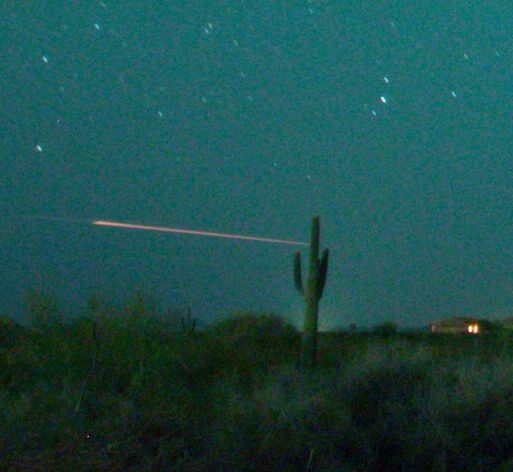