Astronomers using ESA’s Herschel space observatory to probe the turbulent beginnings of a Sun-like star have found evidence of mighty stellar winds that could solve a puzzling meteorite mystery in our own back yard.
In spite of their tranquil appearance in the night sky, stars are scorching furnaces that spring to life through tumultuous processes – and our 4.5 billion-year-old Sun is no exception. To glimpse its harsh early days, astronomers gather clues not only in the Solar System but also by studying young stars elsewhere in our Galaxy.
Using Herschel to survey the chemical composition of regions where stars are being born today, a team of astronomers has noticed that one object in particular is different.
The unusual source is a prolific stellar nursery called OMC2 FIR4, a clump of new stars embedded in a gaseous and dusty cloud near to the famous Orion Nebula.
“To our great surprise, we found that the proportion of two chemical species, one based on carbon and oxygen and the other on nitrogen, is much smaller in this object than in any other protostar we know,” says Dr Cecilia Ceccarelli, of the Institute de Planétologie et d’Astrophysique de Grenoble, France, who lead the study with Dr Carsten Dominik of the University of Amsterdam in the Netherlands.
In an extremely cold environment, the measured proportion could arise by one of the two compounds freezing onto dust grains and becoming undetectable. However, at the relatively ‘high’ temperature of about –200°C found in star-forming regions like OMC2 FIR4, this should not occur.
“The most likely cause in this environment is a violent wind of very energetic particles, released by at least one of the embryonic stars taking shape in this proto-stellar cocoon,” Dr Ceccarelli adds.
The most abundant molecule in star-forming clouds, hydrogen, can be broken apart by cosmic rays, energetic particles that permeate the entire Galaxy. The hydrogen ions then combine with other elements that are present – albeit only in trace amounts – in these clouds: carbon and oxygen, or nitrogen.
. 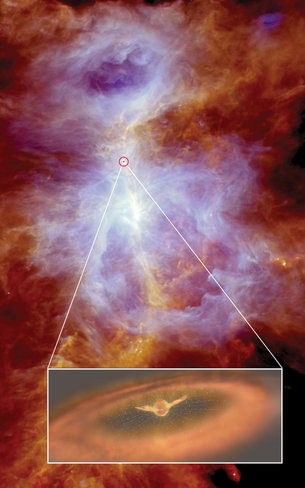 Violent wind gusting around protostar in Orion
.
Normally, the nitrogen compound is also quickly destroyed, yielding more hydrogen for the carbon and oxygen compound. As a result, the latter is far more abundant in all known stellar nurseries.
Strangely enough, though, this was not the case for OMC2 FIR4, suggesting that an additional wind of energetic particles is destroying both chemical species, keeping their abundances more similar.
Astronomers think that a similarly violent wind of particles also gusted through the early Solar System, and this discovery might finally point to an explanation for the origin of a particular chemical element seen in meteorites.
Quelle: ESA
« Zum vorherigen Eintrag Zum nächsten Eintrag »
3954 Views
Created with page4