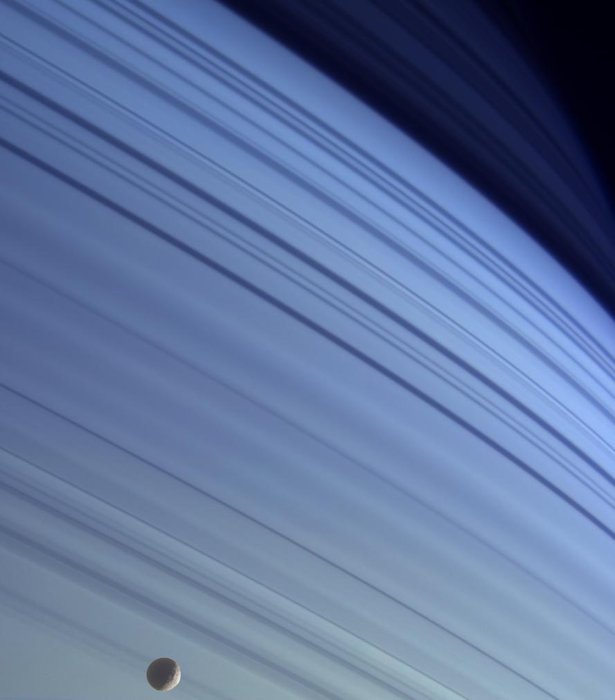 It may seem odd to think of planets casting shadows out in the inky blackness of space, but it is a common phenomenon. Earth’s shadow obscures the Moon during a lunar eclipse, and Jupiter’s moons cast small shadows onto their parent planet.
One of the best places in our Solar System to spot intriguing and beautiful celestial shadows is at Saturn. On 1 July, the international Cassini mission celebrates 10 years of exploring Saturn, its rings and its moons, an endeavour that has produced invaluable science but also stunning images like this.
Drifting along in the foreground, small and serene, is Saturn’s icy moon Mimas. The blue backdrop may at first appear to be the gas giant’s famous and impressive set of rings, with pale and dark regions separated by long inky black slashes, but it is actually the northern hemisphere of Saturn itself. The dark lines slicing across the frame are shadows cast by the rings onto the planet.
Although we may not associate the colour blue with Saturn, when Cassini arrived at the planet the northernmost regions displayed the delicate blue palette shown in this image. As this region of Saturn is generally quite free of cloud, scattering by molecules in the atmosphere causes sunlight to take a longer path through the atmosphere. The light is scattered predominantly at shorter – bluer – wavelengths. This is similar to why the sky on Earth appears blue to our eyes.
Seasonal changes over the years since this photo was taken have turned the blue into Saturn's more familiar golden hue. The reverse is occurring in the south, which is slowly becoming bluer.
This image is composed of infrared, optical and ultraviolet observations from Cassini’s narrow-angle camera on 18 January 2005. The colours closely match what the scene would look like in true colour.
The Cassini–Huygens mission is a cooperative project of NASA, ESA and Italy’s ASI space agency.
Quelle: ESA
« Zum vorherigen Eintrag Zum nächsten Eintrag »
3076 Views
Created with page4