The 701 Club
.
Case # 9053
According to the NICAP web site the case is described as:
Aug. 18, 1964; Atlantic Ocean, 200 miles east of Dover, Delaware. 12:35 a.m. Witnesses: Maj. D.W. Thompson and First Pilot 1st Lt. J.F. Jonke, on a USAF C-124 transport plane. One round, blurred, reddish-white object was on a collision course with the C-124 from ahead and below. The airplane evaded the object. Sighting lasted 2 minutes.1
The Blue Book file only contains three pages of message traffic describing the event and a brief mention by Hynek to Quintanilla. The C-124 was flying at a magnetic heading of 260 and a TAS of 200 kts. They changed heading from 260 to 340. The time is listed as 0535Z and the sighting lasted 2 minutes.
1st Lt David Ross was the investigating officer and he reported the crew had another trip 15 hours after they had landed. He talked only to the aircraft commander and could not explain the event. There was no radar contact with the object and there were no aircraft in the area.
It seems that this was a very good unidentified case but I think that certain parts of the case were ignored.
Hynek’s investigation
Hynek really did not do much in the way of investigating this case. He proposed a possible solution but wanted to talk to the crew before labeling it identified:
Apparently these people were between two cloud decks and saw an object approaching them. It might have been a relatively stationary balloon which they were overtaking and passed. Since everything over the Atlantic is carefully checked by radar, this is a puzzler, and it would be very interesting to get the comments of the individual crew members. I would like to find out how bright the object appeared and also whether they ever saw it to the rear of the plane.2
It is not clear if Hynek ever talked to the crew because there are no other comments by Hynek in the files. However, he did include it in his book, “The UFO Experience” as a nocturnal light (listed as NL-10). It seems that all Hynek did was record it for his own records and did not bother to investigate much further than that because there is something missed or not mentioned by the investigation on this case.
A reasonable explanation
The first thing to determine was the plane’s position and direction to see if there might be a possible solution that could be checked. According to the file, the plane was 200 miles east of Dover, Delaware (no longitude/latitude was given). The plane was flying on a magnetic bearing of 260 degrees. The magnetic declination for this area is roughly -13 degrees, which means the true heading was 247 degrees. 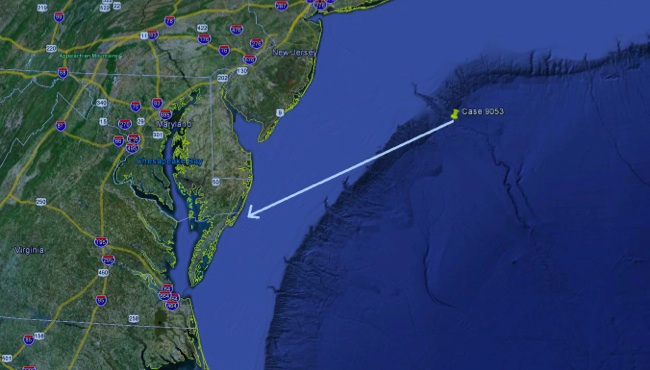 This sighting line is very interesting. Using Google Earth, this direction points towards the launch pads at Wallops Island, which is located about 220 miles away along a true bearing of 246 degrees. Was there activity at Wallops island that night?
The astronautix web site gives the following entry for the date in question:
1964 August 18 - . 06:05 GMT - . Launch Site: Wallops Island. Launch Complex: Wallops Island LA3. LV Family: Scout. Launch Vehicle: Scout X-4A. LV Configuration: Scout X-4A S129R. •Reentry 4A - . Nation: USA. Agency: NASA. Apogee: 183 km (113 mi). Summary: Scout launch tested Apollo-type ablator materials at lunar reentry heating levels.3
The rocket would have appeared to be a bright reddish ball of fire that would rise out of the lower cloud deck and move down range. The pilot stated he took an evasive turn to 340 degrees magnetic and reported that the UFO then took a right turn and disappeared. This “right turn” by the UFO could imply it went to the pilot’s left (not to his right), which is a reasonable description of the rocket’s trajectory towards the east. The duration of the first stage burn was about 40 seconds but the entire rocket burn (all four stages) was over two minutes. At this point, it seems possible that the Scout X-4A launch is a reasonable explanation.
. 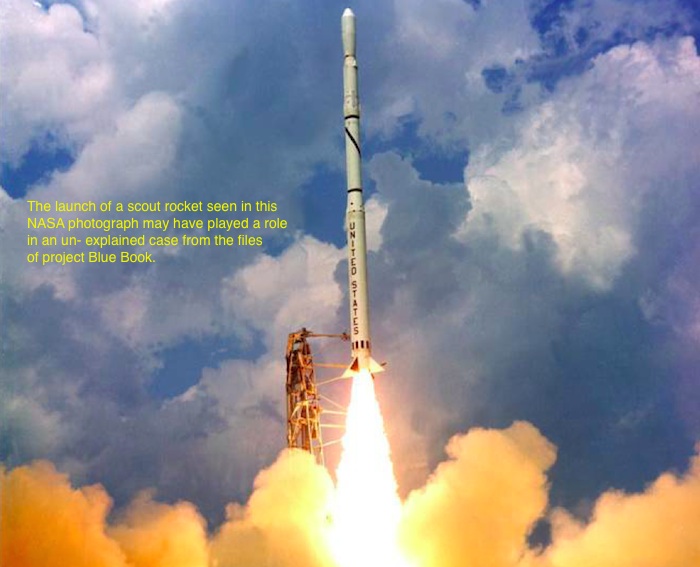 Possible reasons for rejection
Ican think of several factors that might give reason to reject this explanation. However, I do not think any of them are fatal. They are:
1. The difference in the time. There is a 30 minute difference between the time of the sighting and the time of rocket launch.
2. Clouds may have obscured the launch.
I don’t consider the clouds issue a serious problem because they were listed as broken. There could have been a clear area in the direction of the rocket launch. However, the time difference is a problem. We don’t really know if the time listed for the sighting is accurate. The investigating officer stated he only had time to interview the pilot. It may be possible that the time was approximate or recorded in error.
Why didn’t Blue Book identify it?
If you believe what UFOlogists state about Blue Book, they would have jumped at the chance in identifying this as a Scout X-4A launch. The lack of any mention of the rocket launch by the investigating officer, Hynek, or Blue Book staff indicates to me that nobody bothered to check for activity at Wallops Island. The staff at Blue Book seems to have left it up to the investigating officer to identify it and he chose only to interview the pilot. Complacency seems to be why this explanation was probably ignored.
Case closed?
In my opinion, this is a reasonable explanation for the event in question. The coincidence that the plane was pointed towards Wallops Island when they saw the UFO and that a rocket launch occurred within 30 minutes of the time of the sighting, is difficult to ignore. If we assume there is an error in the time of the event, then this can be listed as a probable rocket launch and remove it from the “unidentified list”.
Quelle: SUNlite 1/2013
 
UFO-Forschung
« Zum vorherigen Eintrag Zum nächsten Eintrag »
3253 Views
Created with page4