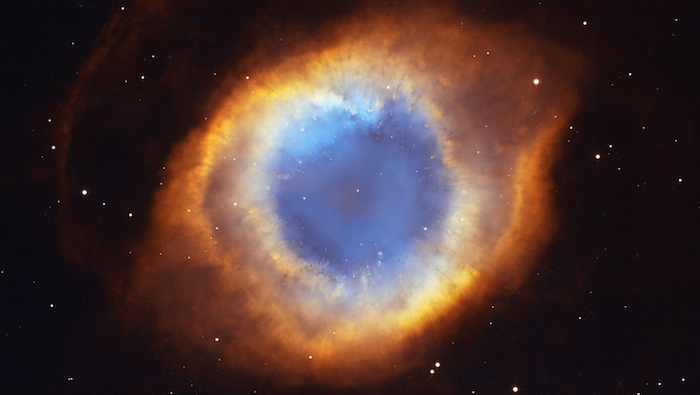 Astronomers using ESA's Herschel space observatory, have discovered that a molecule vital for creating water exists in the burning embers of dying Sun-like stars.
A star like the Sun steadily burns hydrogen in its core for billions of years. But once the fuel begins to run out, the central star swells into a red giant, becoming unstable and shedding its outer layers to form a planetary nebula.
The remaining core of the star eventually becomes a hot white dwarf, pouring out ultraviolet radiation into its surroundings. This intense radiation may destroy molecules that had previously been ejected by the star and that are bound up in the clumps or rings of material seen in the periphery of planetary nebulas.
While the dramatic supernova explosions of weightier stars are capable of forging the heaviest elements, planetary nebulae contain a large proportion of the lighter "elements of life" such as carbon, nitrogen, and oxygen, made by nuclear fusion in the parent star. The harsh radiation was also assumed to restrict the formation of new molecules in those regions.
. 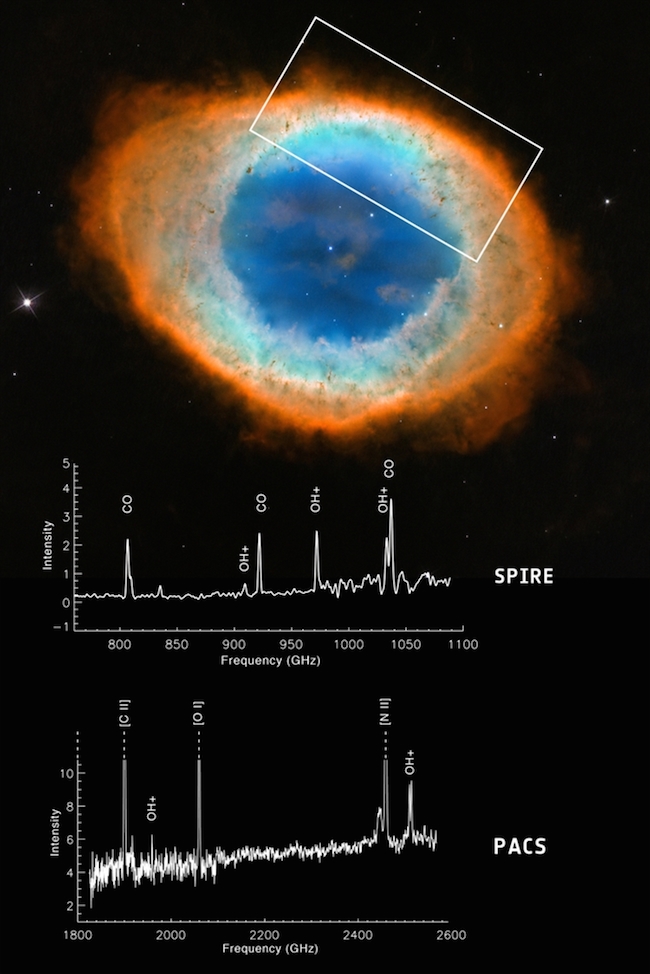 Water building molecule in the Ring Nebula. Image credit: Hubble image: NASA/ESA/C. Robert O’Dell (Vanderbilt University) Herschel data: ESA/Herschel/PACS & SPIRE/ HerPlaNS survey/I. Aleman et al.
.
In two separate studies using Herschel, with its 3.5 metre-wide infrared eye, astronomers have discovered that a molecule vital to the formation of water seems to rather like this harsh environment, and perhaps even depends upon it to form. The molecule, known as OH+, is a positively charged combination of single oxygen and hydrogen atoms.
One study, led by Dr Isabel Aleman of the University of Leiden, in the Netherlands, analysed 11 planetary nebulas and the molecule was found in three that hosted the hottest stars, with temperatures exceeding 100 000ºC.
"We think that a critical clue is in the presence of the dense clumps of gas and dust, which are illuminated by UV and X-ray radiation emitted by the hot central star," says Dr Aleman.
"This high-energy radiation interacts with the clumps to trigger chemical reactions that leads to the formation of the molecules.
. 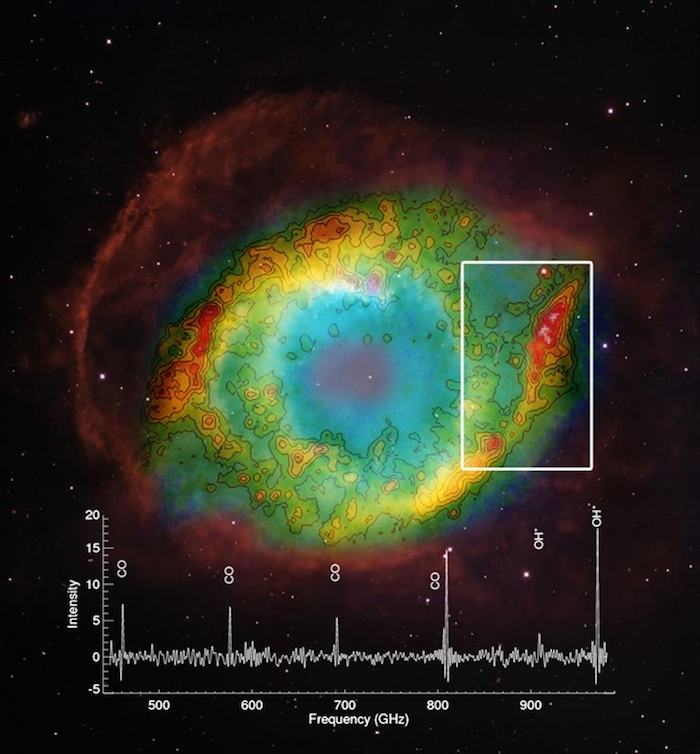 Herschel observations of the Helix Nebula. Image credit: Hubble image: NASA/ESA/C.R. O’Dell (Vanderbilt University), M. Meixner & P. McCullough (STScI); Herschel data: ESA/Herschel/SPIRE/MESS Consortium/M. Etxaluze et al.
.
Another study, led by Dr Mireya Etxaluze of the Instituto de Ciencia de los Materiales de Madrid, focused on the Helix Nebula, one of the nearest planetary nebulas to our Solar System, at a distance of 700 light years. The central star is about half the mass of our Sun, but has a far higher temperature of about 120 000ºC.
Herschel mapped the presence of the crucial molecule across the Helix Nebula, and found it to be most abundant in locations where carbon monoxide molecules, previously ejected by the star, are most likely to be destroyed by the strong UV radiation.
Oxygen atoms, liberated from the carbon monoxide, are available to make the oxygen–hydrogen molecules, further bolstering the hypothesis that the UV radiation may be promoting their creation.
These are the first studies to identify this critical molecule needed for the formation of water in planetary nebulas, although it remains to be seen if the conditions would actually allow water formation to proceed.
"The proximity of the Helix Nebula means we have a natural laboratory on our cosmic doorstep to study in more detail the chemistry of these objects and their role in recycling molecules through the interstellar medium," says Dr Etxaluze.
Herschel, which was launched in May 2009, on an Ariane 5 from ESA’s Spaceport in Kourou, French Guiana, ran out of the essential helium coolant that had allowed it to study the cold Universe in April 2013. But its data will fuel new research for years to come.
Quelle: SEN
« Zum vorherigen Eintrag Zum nächsten Eintrag »
3244 Views
Created with page4