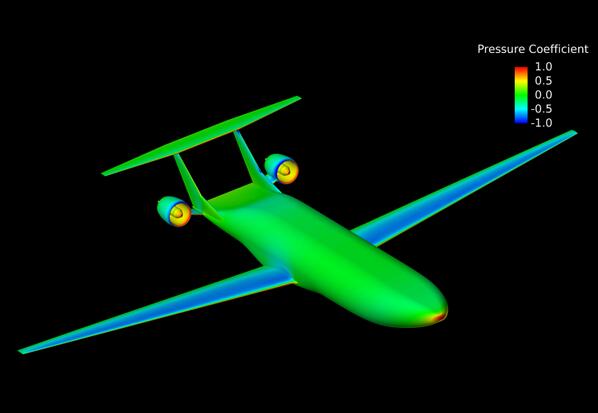 The ability to simulate airflow over aircraft that look different from what we see today is a key challenge for aeronautical innovators.
Image Credit: NASA / Shishir Pandya
.
The right tool for the job.
It's a platitude that is as true for garage tinkerers as it is for the NASA aeronautical innovators who are helping to design future airliners that will cut fuel consumption, reduce polluting emissions and fly more quietly.
Yet at least in one area – namely computational fluid dynamics, or CFD – the design tools that helped give us the modern airliners flying today are not expected to be up to the challenge in the future without some serious upgrades.
This was the finding of a report recently released by NASA called “CFD Vision 2030 Study: A Path to Revolutionary Computational Aerosciences.” It came out of a one-year study funded by NASA that included Boeing, Pratt & Whitney, Stanford University, The Massachusetts Institute of Technology, The University of Wyoming and The National Center for Supercomputing Applications.
Watch live stream of CFD study panel discussion from Aviation 2014 on Monday, June 16, at 2:00 pm ET.
.

Generating a CFD visualization that can cover the entire area of even the standard tube-and-wing aircraft is a challenge.
Image Credit: NASA / Boeing
.
The dilemma is that today's CFD, which simulates airflow around an airplane and through its jet engines, is largely designed to deal with aircraft with traditional tube and wing configurations that everyone is used to. And even then CFD’s full effectiveness through all phases of flight is limited.
But future aircraft designs routinely flying during the 2030's may look very different from today's airliners in order to deliver on the promises of reduced fuel burn, noise and emissions.
Wings may be longer and skinnier and held up, or braced, by trusses. Aircraft hulls may be broader and flatter or have more pointed noses. Jet engines may be mounted on the top of the aircraft. Or the joint between a wing and the body may be blended into a seamless contour.
Understanding the physics behind how all of these new variables will affect airflow during all phases of flight, and then finding a way to model that in a computer simulation and validate the CFD is accurate, are the challenges facing NASA's computer experts right now.
"If we can get more physics into the models we're using with our CFD, we'll have a more general tool that can attack not only off-design conditions of conventional tube and wing aircraft, but it also will do better with the different looking configurations of the future," said Mike Rogers, an aerospace engineer at NASA's Ames Research Center in California.
. 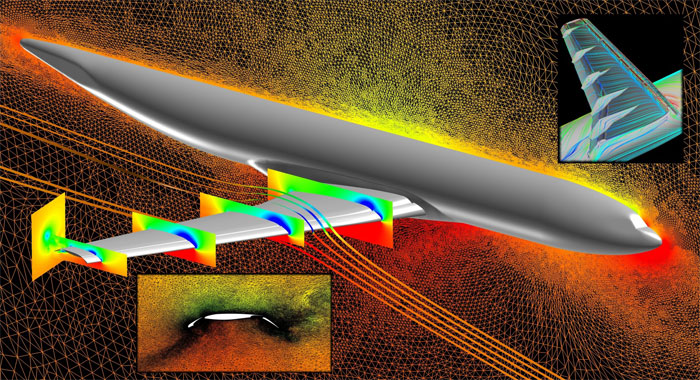 This CFD visualization required a NASA supercomputer to handle the intensive calculations. It shows a mesh adaptation used to simulate a transport aircraft in a high-lift configuration.
Image Credit: NASA / Elizabeth Lee-Rausch, Michael Park
.
Data from wind-tunnel testing of these new aircraft designs as they come along will help refine the CFD algorithms. The overarching goal is to improve the entire suite of testing capabilities –simulation, ground and flight test – to provide a more effective, comprehensive toolbox for designers to use to advance the state of the art more quickly.
"It's an iterative process," Rogers said. "We need to continually assess how well our tools are working so we know whether they are adequate or not."
In the meantime, even as NASA's CFD experts work down a path toward their long-range future goals of 2030 – advancements made possible only because of vast leaps in computer processing speed and power – their first step is to meet a set of more immediate technical challenges as soon as 2017.
The first stepping-stone goal is to reduce by 40 percent the error in computing several flow phenomena for which current models fail to make accurate predictions; these flow features are likely to be encountered on some of the new aircraft configurations now being studied.
The report highlighted the need for upgrading not only the CFD algorithms, but also discussed how those new algorithms must be written to take advantage of the ever-increasing speed and complexity of future supercomputers.
Quelle: NASA
« Zum vorherigen Eintrag Zum nächsten Eintrag »
3137 Views
Created with page4