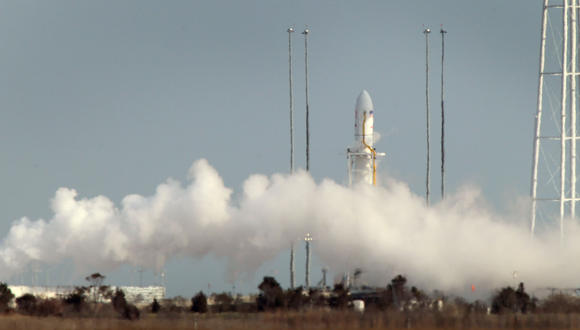 NASA announced Friday that the new launch date for Orbital Science Corp.'s second ISS mission from Virginia's Eastern Shore will be Tuesday, June 10 -- at 2:07 in the morning.

Another Antares rocket is set to blast off from Wallops to resupply the International Space Station, but most of Hampton Roads will likely sleep right through it.

NASA announced Friday that the new launch date for Orbital Science Corp.'s second ISS mission from Virginia's Eastern Shore will be Tuesday, June 10 — at 2:07 in the morning. The launch window is five minutes.

According to Keith Koehler at NASA's Wallops Flight Facility, both the Visitor Center and the public beach at Assateague Island will be open to spectators, despite the late hour. NASA also plans to stream the event live on NASA TV beginning at 1:15 a.m.

Hampton Roads residents who want a firsthand view can also step outside and look to the Eastern sky: The Antares is a medium-lift booster that can easily be seen throughout the region as it vaults from the pad, weather permitting, sending the Cygnus space freighter into low-Earth orbit.

The Cygnus is expected to arrive at the space station on June 13, and remain until July 11.

Dulles-based Orbital said Friday that its team has already integrated the two-stage rocket and will transfer it to the transporter/erector/launcher (TEL) in mid-May. The Cygnus will be fully fueled in the next several weeks, then mated to the Antares.

After the vehicles undergo testing, the Cygnus will be loaded with final crew supplies and cargo. Then the rocket and spacecraft will be moved to Pad 0A at the Mid-Atlantic Regional Spaceport (MARS) at the flight facility.

The launch was originally set for May 6, but was postponed because of a string of setbacks to a SpaceX resupply launch from Cape Canaveral, and scheduling conflicts with the space station.

To view the launch on NASA TV, go to nasa.gov/nasatv. For more information on Wallops launches or viewing sites, call the Wallops Public Information Line at 757-824-2050.

Orbital Sciences Corporation has delayed the upcoming launch of its Antares rocket from Wallops for at least a week, after a rocket engine being tested for use in a future mission failed.

Orbital Sciences Corporation has delayed the upcoming launch of its Antares rocket from Wallops for at least a week, after a rocket engine being tested for use in a future mission failed.

Orbital said the mission, which was scheduled for June 10, will take place no earlier than June 17.

It will be Orbital's second of eight planned commercial cargo mission to the International Space Station under a NASA contract. The missions launch from the Mid-Atlantic Regional Spaceport at NASA Wallops Flight Facility.

The delay is to allow engineering teams to investigate what went wrong during an acceptance test for an Aerojet Rocketdyne AJ26 engine on May 22. The engine was to be used for a mission early in 2015.

An anomaly happened about 30 seconds into the 54-second test, resulting in extensive damage to the engine, according to Orbital.

"Over the next several days, engineering teams from Aerojet and Orbital will gather and examine the data collected from the test to determine the cause of the failure," Orbital said.

June 17 is a planning date. The actual date depends on the investigation team's progress and updates on the launch schedule will be forthcoming, Keith Kohler of NASA Wallops Flight Facility's