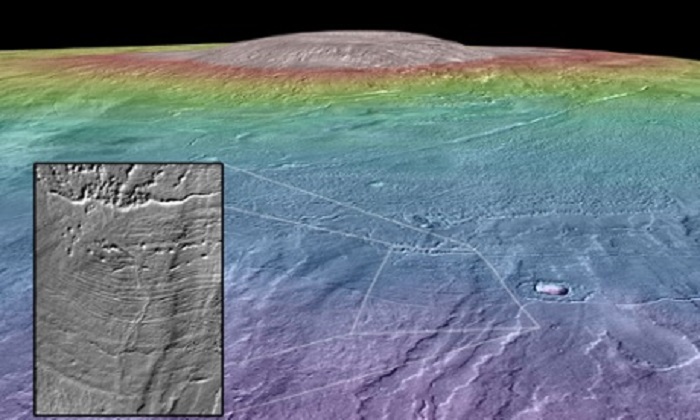 Mars volcano may have been site for life

Geological landforms spotted on the flanks of a giant Martian volcano suggest that lakes could have existed there just 210m years ago. In geological terms, this is the recent past. On Earth at that time, the earliest dinosaurs were evolving as part of the late Triassic period.

No one is suggesting that there were dinosaurs on Mars. Instead, the researchers believe that the lakes could have been home to bacteria and other single-celled organisms.

Mars’s Arsia Mons volcano is nearly twice as tall as Mt Everest, yet it is only the third tallest volcano on Mars. Its northwestern flank shows erosion patterns that typify the presence of a former glacier. This has been known since the 1970s.

In the new work, Kathleen Scanlon of Brown University, Rhode Island, and colleagues identified "pillow lava" in images of the volcano taken by Nasa’s Mars Reconnaissance Orbiter. Under the best conditions, this spacecraft can take pictures of the Martian surface that show details just 30cm across. It arrived at Mars in 2006.

On Earth, pillow lava forms when volcanoes erupt beneath the ocean. The team also found geological patterns similar to those on Earth that occur when eruptions take place beneath glaciers.

In a paper published in Icarus, the researchers say that they identified hundreds of cubic kilometres of such erupted lava. This would have melted the overlying ice to produce encapsulated lakes within the glacier.

Such places are important microbial environments on Earth. A particular example is Lake Vostok in Antarctica, which was drilled into in 2012 by a Russian team of scientists. It was always thought that subglacial lakes were an important analogue for Jupiter’s ice-covered moon, Europa, where astronomers strongly suspect there to be a subglacial ocean covering the small world.

This is the first time subglacial lakes have been suggested for Mars. Scanlon estimates they could have persisted for hundreds or even a few thousand years. This may have been long enough for the lakes to be colonised by microbial life forms, if such life forms ever evolved on Mars.

It is speculative stuff but finding life on Mars, or the evidence of previous life, is a perennial siren song for scientists. It would be a breakthrough because fundamental biological questions remain unanswered.

No one knows how life began on Earth. Maybe the conditions needed were completely different from those of today. No one knows whether life has to be based upon DNA. Perhaps another molecule is capable of storing genetic information. A second example of life would help us investigate these puzzles.

The new finding is significant because previously identified habitable niches on Mars have been much older, dating to around 2.5bn years old. There is lots of geological evidence in the form of dry river beds and other erosion patterns that point to water existing on Mars in the distant past.

Over time, the planet lost its atmosphere and with this insulation gone, the water largely disappeared as well. These days the last vestiges can be found in the planet’s polar ice caps. During the transition period, frozen lakes and glaciers could have dotted the surface.

Although there are no glaciers there today, computer simulations show that the flanks of the giant Martian volcanoes are likely sites for glaciers. Mars can periodically tip over because it does not have the stabilising gravity of a large moon. This would chill the climate near the volcanoes. The simulations suggest that the last time this would have happened was about 210m years ago.

With the European Space Agency gearing up to send its life-finding rover to Mars in 2018, there will be lots more planetary scientists looking for habitable niches to investigate.