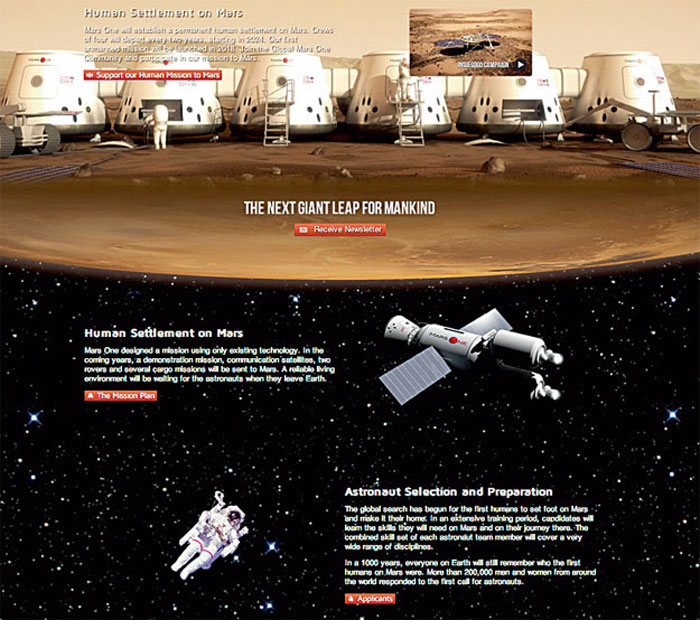 Fatwa committee under the General Authority of Islamic Affairs and Endowment in the UAE says such a journey poses a real risk to life.

Promoting or being involved in a one-way trip to the Red Planet is prohibited in Islam, a fatwa committee under the General Authority of Islamic Affairs and Endowment in the UAE has ruled.
“Such a one-way journey poses a real risk to life, and that can never be justified in Islam,” the committee said.  “There is a possibility that an individual who travels to planet Mars may not be able to remain alive there, and is more vulnerable to death.”
Whoever opts for this “hazardous trip”, the committee said, is likely to perish for no “righteous reason”, and thus will be liable to a “punishment similar to that of suicide in the Hereafter”.
The committee, presided by Professor Dr Farooq Hamada, said: “Protecting life against all possible dangers and keeping it safe is an issue agreed upon by all religions and is clearly stipulated in verse 4/29 of the Holy Quran: Do not kill yourselves or one another. Indeed, Allah is to you ever Merciful.”
Late in April 2013, Mars One, a Dutch company, invited volunteers to fly and live on the Red Planet, but there is no technology so far that would enable a return trip from Mars to Earth.  The company is planning the first such trip to Mars in 2023 and another crew every two years afterwards with the goal of establishing a permanent human colony.
The applicants must be aged between 18 and 40 years and in good physical condition.  They have to pay only $38 for the trip. Thousands of volunteers, including some 500 Saudis and other Arabs, have reportedly applied for the mission which costs $6 billion. The committee indicated that some may be interested in travelling to Mars for escaping punishment or standing before Almighty Allah for judgment.
“This is an absolutely baseless and unacceptable belief because not even an atom falls outside the purview of Allah, the Creator of everything.  This has also been clearly underscored in verse 19&20/93 of the Holy Quran in which Allah says: There is no one in the heavens and earth but that he comes to the Most Merciful as a servant. (Indeed) He has enumerated them and counted them a (full) counting.”
Echoing the same, Islamic researcher Dr Shaikh Mohammed Al Ashmawy said there is no debate in this issue. “Almighty Allah said in verse 2/195 in the Holy Quran: Do not throw yourselves with your own hands into destruction.”
Sheikh Mohammed Yusuf, Imam of the Amena mosque, said: “Man’s life is not his or her own property; it is God’s creation, and therefore suicide is prohibited in all religions, and of course by law.”
Quelle: Khaleej Times
(Die Khaleej Times ist eine der größten englischsprachigen Tageszeitungen im Raum des persischen Golf. Die Zeitung wurde 1978 in Dubai in den Vereinigten Arabischen Emiraten gegründet)

The General Authority of Islamic Affairs and Endowment (GAIAE) in the United Arab Emirates issued a Fatwa against Muslims going on a one-way journey to Mars. The committee argued that an attempt to dwell on the planet would be so hazardous as to be suicidal and killing oneself is not permitted by Islam.

Mars One's mission is to extend to all humans, including Muslims, the chance to become the Neil Armstrong of Mars. Mars One has no political or religious interests, but hopes that this great honor will be achievable for anyone in the world, no matter what their religion or nationality is.

Do the dangers associated with exploration merit a Fatwa?

And among His Signs is the creation of the heavens and the earth, and the variations in your languages and your colors: verily in that are Signs for those who know. (Quran 30: 22)

The Muslim world has a rich tradition of exploration. The verse from the Quran above encourages Muslims to go out and see the signs of God’s creation in the ‘heavens and the earth’. The most influential example of this was the Moroccan Muslim traveller, Ibn Battuta, who from 1325 to 1355 travelled 73,000 miles, visiting the equivalent of 44 modern countries. Among the countries Ibn Battuta visited were Russia, Afghanistan, India, the Maldives, Indonesia, Vietnam, the Philippines and China.

His travels, documented in his famous journal, Rihla, have taught us more about the medieval societies in those countries than dozens of other historical texts put together. In that book, he wrote about seeing the signs of God’s creation wherever he travelled. He told us ‘Never, so far as possible, to cover a second time any road’.

The mission to Mars is a road that has never been walked before, even though the first settlers will be walking in the footsteps of Ibn Battuta, Marco Polo, Neil Armstrong, or any of the other great explorers in history.

Space Exploration, just like Earth exploration throughout history, will come with risks and rewards. We would like to respectfully inform the GAIAE about elements of the Mars One mission that reduce the risk to human life as much as possible. It may seem extremely dangerous to send humans to Mars today, but the humans will be preceded by at least eight cargo missions. Robotic unmanned vehicles will prepare the habitable settlement. Water and a breathable atmosphere will be produced inside the habitat and the settlement will be operational for two years, even before the first crew leaves Earth. Each of the cargo missions will land in a system very similar to the human landing capsule. An impressive track record of the landing technology will be established before risking human lives. It should be noted that the moon lander was never test on the Moon before Neil Armstrong and Buzz Aldrin landed successfully on the Moon.

If we may be so bold: the GAIAE should not analyze the risk as they perceive it today. The GAIAE should assess the potential risk for humans as if an unmanned habitable outpost is ready and waiting on Mars. Only when that outpost is established will human lives be risked in Mars One's plan. With eight successful consecutive landing and a habitable settlement waiting on Mars, will the human mission be risk-free? Of course not. Any progress requires taking risks, but in this case the reward is 'the next giant leap for mankind'. That reward is certainly worth the risks involved in this mission.

Mars One respectfully requests GAIAE to cancel the Fatwa and make the greatest Rihla, or journey, of all times open for Muslims too. They can be the first Muslims to witness the signs of God’s creation in heaven, drawing upon the rich culture of travel and exploration of early Islam.

The lives and journey of the first Mars settlers will tell us more about our place in the universe than any other humans before us.

The Fatwa prohibits Muslims from going to Mars, but not from applying to Mars One's mission or training for the mission. In the next ten years, Mars One is open to working with the GAIAE to assess the risk of the mission as the unmanned settlement is under construction. Hopefully before departure of the first crew, the GAIAE will cancel the Fatwa and support the Mars One mission.

As Ibn Battuta also wrote: ‘Travelling - it leaves you speechless, then turns you into a storyteller.”