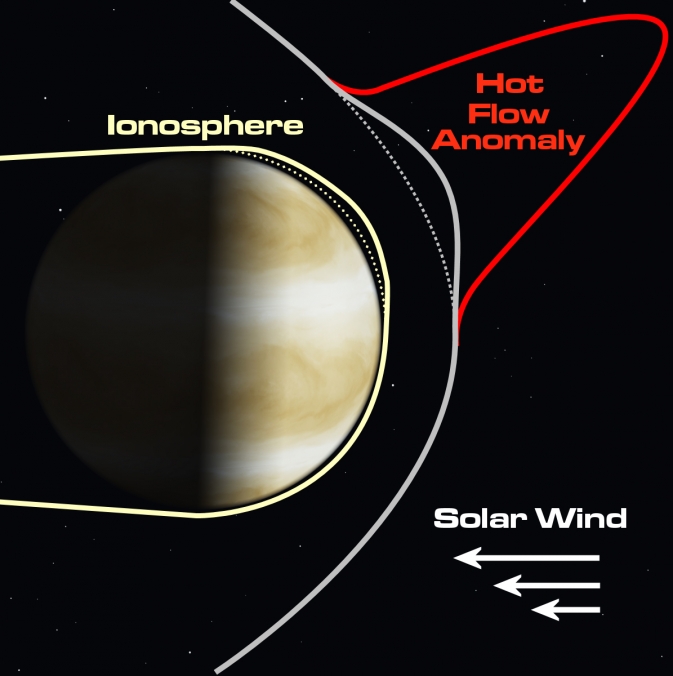 Giant perturbations called hot flow anomalies in the solar wind near Venus can pull the upper layers of its atmosphere, the ionosphere, up and away from the surface of the planet.

Researchers recently discovered that a common space weather phenomenon on the outskirts of Earth’s magnetic bubble, the magnetosphere, has much larger repercussions for Venus. The giant explosions, called hot flow anomalies, can be so large at Venus that they’re bigger than the entire planet and they can happen multiple times a day.
"Not only are they gigantic," said Glyn Collinson, a space scientist at NASA’s Goddard Space Flight Center in Greenbelt, Md. "But as Venus doesn’t have a magnetic field to protect itself, the hot flow anomalies happen right on top of the planet. They could swallow the planet whole."
Collinson is the first author of a paper on these results that appeared online in the Journal of Geophysical Research in February 2014. The work is based on observations from the European Space Agency's Venus Express. The results show just how large and how frequent this kind of space weather is at Venus.
Earth is protected from the constant streaming solar wind of radiation by its magnetosphere. Venus, however, has no such luck. A barren, inhospitable planet, with an atmosphere so dense that spacecraft landing there are crushed within hours, Venus has no magnetic protection.
Scientists like to compare the two: What happened differently at Earth to make it into the life-supporting planet it is today? What would Earth be like without its magnetic field?
At Earth, hot flow anomalies do not make it inside the magnetosphere, but they release so much energy just outside that the solar wind is deflected, and can be forced to move back toward the sun. Without a magnetosphere, what happens at Venus is very different.
Venus's only protection from the solar wind is the charged outer layer of its atmosphere called the ionosphere. A sensitive pressure balance exists between the ionosphere and the solar wind, a balance easily disrupted by the giant energy rush of a hot flow anomaly. The hot flow anomalies may create dramatic, planet-scale disruptions, possibly sucking the ionosphere up and away from the surface of the planet.
Quelle: NASA
3234 Views
Created with page4