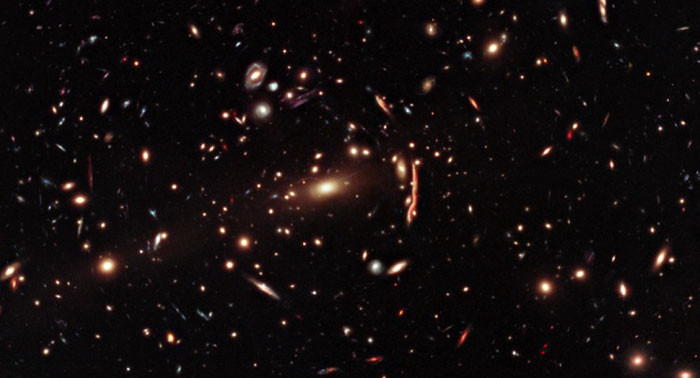 Soon after the Big Bang, there were tiny ripples: quantum fluctuations in the density of the seething ball of hot plasma. Billions of years later, those seeds have grown into galaxy clusters — sprawling groups of hundreds or thousands of galaxies bound together by gravity.

But there seems to be a mismatch. Results released last year suggest that as much as 40% of galaxy-cluster mass is missing when compared with the amount of clustering predicted by the ripples1. The findings have led theorists to propose physics beyond the standard model of cosmology to make up the difference. But a reconciliation could be in the offing, using improved measurements of the cluster masses.
The mismatch was first detected by the European Space Agency’s Planck spacecraft, which measured the fluctuations imprinted on the cosmic microwave background radiation left over from the Big Bang and compared them with clusters that it could see. “A lot of us are intrigued” by the discrepancy, says David Spergel, an astrophysicist at Princeton University in New Jersey, who studied the cosmic microwave background with Planck’s pre­decessor, NASA’s Wilkinson Microwave Anisotropy Probe. “There’s something missing in our understanding.”
Some theorists have played with the characteristics of neutrinos — ghostly, nearly massless sub­atomic particles — as a way of compensating. On 6 February, for example, physicist Wayne Hu of the University of Chicago in Illinois and his colleagues published2 a theory that the mismatch could be bridged if the three known types of neutrino were significantly heavier than thought, or if there were a fourth, as yet undiscovered species of neutrino. The extra neutrino mass would have had an effect on the growth of the primordial ripples, evening them out and resulting in fewer clusters being observed today.
Now two studies, one in preparation and one posted on the arXiv preprint server on 11 February3, suggest that clusters actually have more mass than Planck estimated — and thus that there is little need for exotic physics. Both studies used gravitational lensing, a technique that weighs clusters by measuring how much their gravitational fields distort light that passes through them. “We think there’s no problem,” says Anja von der Linden, an astrophysicist at the Kavli Institute for Particle Astrophysics and Cosmology at Stanford University in California.
. 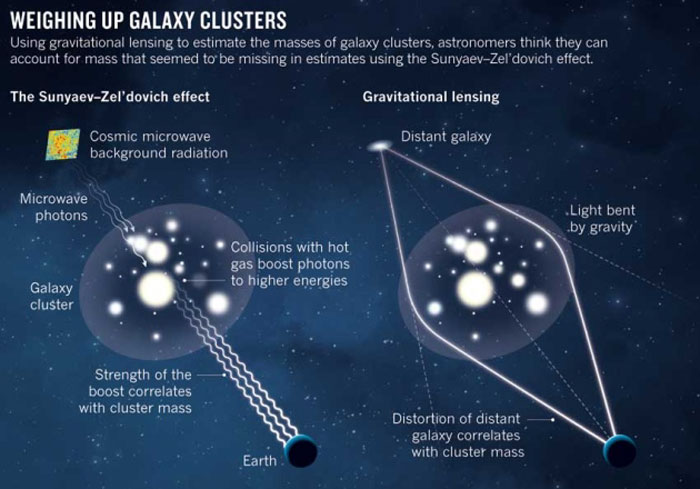 Von der Linden works on a project called Weighing the Giants, which used the Subaru telescope and the Canada–France–Hawaii tele­scope, both on Mauna Kea in Hawaii, to study 22 galaxy clusters also measured by Planck. It came up with an average cluster mass of 1015 solar masses, or about 1,000 times the mass of the Milky Way — an average that was 43% higher than Planck’s estimates3. The other study, called the Cluster Lensing and Supernova Survey with Hubble (CLASH), used the Hubble Space Telescope to measure 25 clusters measured by Planck, and produced an estimate that was about 30% higher than Planck’s.
The differences seem to be attributable to the uncertain nature of Planck’s estimates, which rely on a process called the Sunyaev–Zel’dovich effect (see ‘Weighing up galaxy clusters’). Planck detects photons from the cosmic microwave background. On their way to the satellite, some of these microwaves pass through galaxy clusters. There, they encounter energetic electrons associated with clouds of hot gas. When the photons collide with the electrons, they are boosted to higher energies.
The strength of that signal can be correlated with the mass of all the galaxies in the cluster, because a larger cluster will trap more hot gas. But it is not a precise relationship. “That’s the biggest source of uncertainty,” says James Bartlett, a cosmologist at the University of Paris Diderot who is part of the Planck collaboration. He says that Planck will release an updated analysis later this year that fine-tunes its mass calibration, and may bump up the cluster masses.
Many astrophysicists think that the remaining discrepancies will be resolved by data from other lensing surveys that are now starting up. The US$50-million Dark Energy Survey, an optical-survey telescope at Cerro Tololo in Chile, completed its first three months of observations on 9 February. It measured hundreds of clusters and its first science results are expected later this year. Next month, a $50-million Japanese instrument, Hyper Suprime-Cam, will be used to start a large lensing survey on the Subaru telescope.
Bradford Benson, an astrophysicist at the Fermi National Accelerator Laboratory in Batavia, Illinois, says that even if turns out that no cluster mass was missing after all, it will still be important to trace the evolution of today’s clusters from the original cosmic ripples to see how the effects of dark energy, a mysterious repulsive force, may have changed with time. “Powerful data sets will be the next chapter in the story,” he says.
Quelle: nature
Missing galaxy mass found
« Zum vorherigen Eintrag Zum nächsten Eintrag »
3828 Views
Created with page4