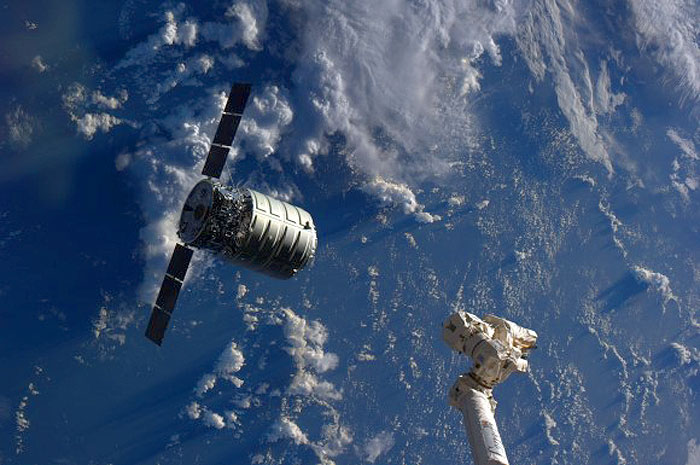 NASA Television Airs Departure of Commercial Cargo Ship from Space Station
.
Orbital Sciences' Cygnus cargo spacecraft, which delivered almost a ton-and-a-half of supplies and scientific experiments to the International Space Station in January, will complete its month-long mission to the orbiting laboratory Tuesday, Feb. 18.
NASA Television will provide coverage of its departure beginning at 6 a.m. EST.
Expedition 38 Flight Engineer Michael Hopkins of NASA, with the assistance of Koichi Wakata of the Japan Aerospace Exploration Agency, will use the station's robotic arm to detach and release Cygnus. The pair will operate from the station's cupola robotics workstation.
Now loaded with trash, the U.S. commercial resupply craft will be detached from the Earth-facing port of the Harmony module about 5:30 a.m. and will be released at 6:40 a.m. Undocking coverage will be recorded and replayed during live coverage of Cygnus release.
On Wednesday, Feb. 19, after it has maneuvered to a safe distance away from the station, Cygnus will fire its engines twice in a maneuver that will enable it to slip out of orbit for a destructive entry into Earth's atmosphere. Cygnus will burn up over the Pacific Ocean. The deorbit sequence will begin shortly after 8 a.m. There will be no television coverage of Cygnus' deorbit.
Quelle: NASA
« Zum vorherigen Eintrag Zum nächsten Eintrag »
3388 Views
Created with page4