The meteor that exploded over Chelyabinsk, Russia, in February 2013 was "a wake-up call," according to a University of California, Davis, scientist who participated in analyzing the event. The work is published Nov. 7 in the journal Science by an international team of researchers.
"If humanity does not want to go the way of the dinosaurs, we need to study an event like this in detail," said Qing-zhu Yin, professor in the Department of Earth and Planetary Sciences at UC Davis.
Chelyabinsk was the largest meteoroid strike since the Tunguska event of 1908, and, thanks to modern technology from consumer video cameras to advanced laboratory techniques, provides an unprecedented opportunity to study such an event, the authors note.
The Chelyabinsk meteorite belongs to the most common type of meteorite, an "ordinary chondrite." If a catastrophic meteorite strike were to occur in the future, it would most likely be an object of this type, Yin said.
The team was led by Olga Popova of the Russian Academy of Sciences in Moscow, and by NASA Ames and SETI Institute meteor astronomer Peter Jenniskens, and included 57 other researchers from nine countries.
"Our goal was to understand all circumstances that resulted in the damaging shock wave that sent over 1,200 people to hospitals in the Chelyabinsk Oblast area that day," said Jenniskens. The explosion was equivalent to about 600 thousand tons of TNT, 150 times bigger than the 2012 Sutter's Mill meteorite in California.
Based on viewing angles from videos of the fireball, the team calculated that the meteoroid entered Earth's atmosphere at just over 19 kilometers per second, slightly faster than had previously been reported.
"Our meteoroid entry modeling showed that the impact was caused by a 20-meter sized single chunk of rock that efficiently fragmented at 30 km altitude," Popova said. (A meteoroid is the original object; a meteor is the "shooting star" in the sky; and a meteorite is the object that reaches the ground.)
The meteor's brightness peaked at an altitude of 29.7 km (18.5 miles) as the object exploded. For nearby observers it briefly appeared brighter than the sun and caused some severe sunburns.
The team estimated that about three-quarters of the meteoroid evaporated at that point. Most of the rest converted to dust and only a small fraction (4,000 to 6,000 kilograms, or less than 0.05 percent) fell to the ground as meteorites. The dust cloud was so hot it glowed orange.
The largest single piece, weighing about 650 kilograms, was recovered from the bed of Lake Chebarkul in October by a team from Ural Federal University led by Professor Viktor Grokhovsky.
Shockwaves from the airburst broke windows, rattled buildings and even knocked people from their feet. Popova and Jenniskens visited over 50 villages in the area and found that the shockwave caused damage about 90 kilometers (50 miles) on either side of the trajectory. The team showed that the shape of the damaged area could be explained from the fact that the energy was deposited over a range of altitudes.
The object broke up 30 kilometers up under the enormous stress of entering the atmosphere at high speed. The breakup was likely facilitated by abundant "shock veins" that pass through the rock, caused by an impact that occurred hundreds of millions of years ago. These veins would have weakened the original meteoroid.
Yin's laboratory at UC Davis carried out chemical and isotopic analysis of the meteorites. Professor Ken Verosub, also of the Department of Earth and Planetary Sciences, measured the magnetic properties of metallic grains in the meteorite. Doug Rowland, project scientist in the Center for Molecular and Genomic Imaging at the UC Davis Department of Biomedical Engineering, contributed X-ray computed tomography scanning of the rock.
Put together, these measurements confirmed that the Chelyabinsk object was an ordinary chondrite, 4,452 million years old, and that it last went through a significant shock event about 115 million years after the formation of the solar system 4,567 million years ago. That impact was at a much later date than in other known chondrites of the same type, Yin said, suggesting a violent history.
Jenniskens calculated that the object may have come from the Flora asteroid family in the asteroid belt, but the chunk that hit the Chelyabinsk area was apparently not broken up in the asteroid belt itself. Researchers at the University of Tokyo and Waseda University in Japan found that the rock had been exposed to cosmic rays for only about 1.2 million years, unusually short for rocks originating in the Flora family.
Jenniskens speculates that Chelyabinsk belonged to a bigger "rubble pile" asteroid that broke apart 1.2 million years ago, possibly in an earlier close encounter with Earth.
The rest of that rubble could still be around as part of the near-earth asteroid population, Jenniskens said.
Yin noted that major meteorite strikes like Tunguska or Chelyabinsk occur more frequently than we tend to think. For example, four tons of material were recovered from a meteor shower in Jilin, China in 1976.
"Chelyabinsk serves as unique calibration point for high energy meteorite impact events for our future studies," he said. Technology for early detection of these objects is needed, Yin said -- such as the Large Synoptic Survey Telescope, currently being developed by an international team headed by UC Davis physics professor J. Anthony Tyson.
The work was supported by the Russian Academy of Sciences, the Office of the Governor of Chelyabinsk Oblast, NASA and the Academy of Finland.
About UC Davis
For more than 100 years, UC Davis has engaged in teaching, research and public service that matter to California and transform the world. Located close to the state capital, UC Davis has more than 33,000 students, more than 2,500 faculty and more than 21,000 staff, an annual research budget of nearly $750 million, a comprehensive health system and 13 specialized research centers. The university offers interdisciplinary graduate study and more than 100 undergraduate majors in four colleges — Agricultural and Environmental Sciences, Biological Sciences, Engineering, and Letters and Science. It also houses six professional schools — Education, Law, Management, Medicine, Veterinary Medicine and the Betty Irene Moore School of Nursing.
.
Quelle: University of California, Davis campus
.
Update: 8.11.2013
.

To Understand A Russian Fireball, Physicists Turn To YouTube 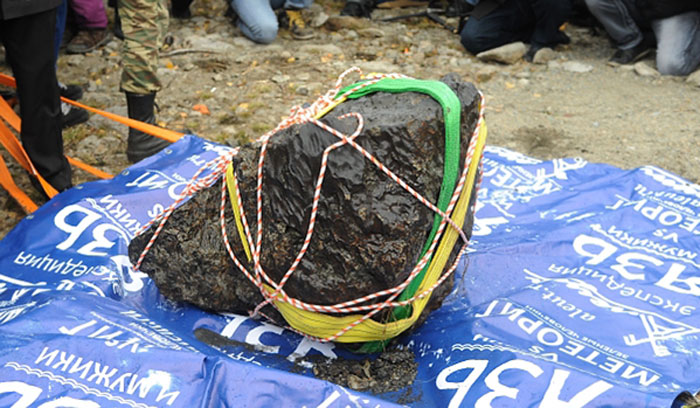 Why Did the Chelyabinsk Meteor Have Two Tails?

Most of the time when a large meteor streaks across the sky it leaves a singular tail. But the meteor that slammed into the skies over the Russian city of Chelyabinsk on Feb. 15, 2013, left a now famous double tail.

That got some meteor experts wondering why. So, using the ample data that was collected during last February’s explosive event — made possible by the pervasive use of “dashcams” in vehicles, other video footage and other observed effects — researchers at Sandia National Laboratories in New Mexico have used a sophisticated aerodynamic computer model to replicate the double tail as it developed, in cross section. An abbreviated animation of the simulation is shown below.

Sure, there have been other simulations of what large meteors might do when they enter the atmosphere. But this is an unusual case where the simulation followed the actual, well-documented event, which is extremely valuable to the modelers for testing the simulation. It’s just one example of how the Chelyabinsk meteor, in an instant, changed a field of science from one that was largely speculative to one that was very real.
“This is the first asteroid disaster in the history of mankind,” remarked Clark Chapman of the Southwest Research Institute, who spoke at the meeting of the American Geophysical Union this week. And although it was a small disaster compared to a hurricane or an earthquake, it still is something we need to learn from to help minimize hazards to life and property, he said. “If we do that we will be in a better position to respond to them.”
.
Quelle: D-News
.
Update: 14.02.2014
.

Search for Chelyabinsk meteor fragments to be over by spring 2014

The meteor, measuring about 17 meters in size, entered the Earth’s atmosphere on February 15, 2013
. 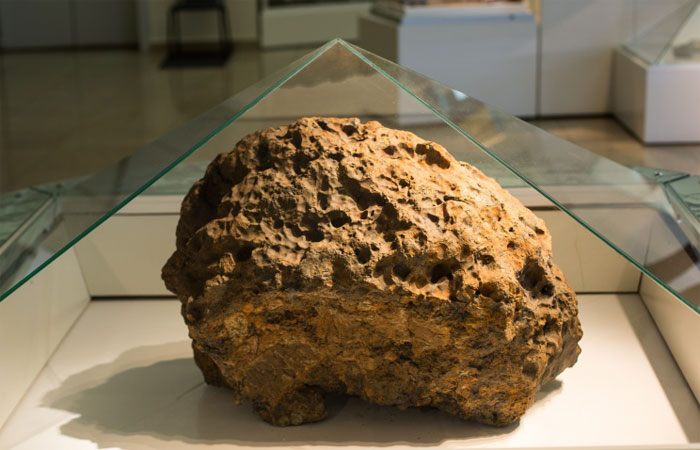 YEKATERINBURG, The search party looking for heavy fragments of the Chelyabinsk meteor, which still remain in Lake Chebarkul in Russia’s Chelyabinsk region, is to be completed by March 1, the CEO of the Aleut Corporation Nikolai Murzin told Itar-Tass on Thursday. Earlier, the company managed to pull from the lake the biggest, 600-ton sunken meteorite fragment.
“We have already pitched our tents up on the lake’s frozen surface and started the search, which we plan to complete by March 1. It usually takes much time to search for meteorite remains on the lake’s bottom with our custom equipment. The lake is now covered with ice and we can place the equipment steadily on a particular spot on the surface. When the water is clear of ice, it is different, because the waves keep tossing the boat with the equipment, so the search radius is constantly altering. That is why it is better to conduct such research in winter”, he explained.
The meteor, measuring about 17 meters in size, entered the Earth’s atmosphere on February 15, 2013. Most of its fragments left from the explosion that followed fell on the territory of Russia’s Chelyabinsk region. The head of the theoretical physics department of the Chelyabinsk State University, Alexander Dudorov, recalled that the biggest fragment recovered so far weighed 654 kilograms.
. 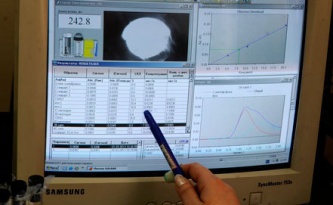 Scientists say Chelyabinsk meteorite fall is comparable with A-bomb explosion
.
The explosion of the Chelyabinsk meteorite in the Earth’s atmosphere could be compared with an A-bomb blast, Mikhail Marov, a members of the Russian Academy of Sciences, told journalists at the Academy’s Institute of Space Research on Friday.
“This event was absolutely unique because we were able to see the scale of consequences caused by the fall of such relatively small bolide,” he said. “More than 1,500 people sought medical help after the meteorite shower, a hundred were taken to hospital, mostly with cut wounds caused by broken glass. Eyewitnesses told about a flash brighter than that of the Sun. Air temperatures went up by 20 degrees at an altitude of 12-13 kilometers.”
In his words, the explosion of the Chelyabinsk meteorite resembled the Tunguska event. “The Chelyabinsk bolide was classified as an Apollo class asteroid approaching the Earth. Here an analogy with the Tungiska meteorite is seen,” he said.
A 10,000-tonne meteorite with a diameter of about 17 meters entered the Earth atmosphere on February 15, 2013 and broke into numerous fragments, the bulk of which fell down in Russia’s Urals Chelyabinsk region. A shock wave that followed the fall of the meteorite broke windows in more than 4,700 houses in Chelyabinsk. Astronomers say the Chelyabinsk meteorite was the biggest celestial object to hit the Earth since the Tunguska event in 1908, when a huge meteorite exploded over Russia’s Siberia. This time, meteorite shower was observed in five Russian regions - the Tyumen, Sverdlovsk, Chelyabinsk and Kurgan regions, and in the republic of Bashkortostan.
Eyewitnesses said they had first seen a bright flash in the sky and had heard the sound of explosion. More than 1,500 people, including more than 300 children, sought medical help after the incident, and as many as 69 people, including 13 children, were hospitalized.
Several fragments of the meteorite have already been found. The biggest one measuring 12 centimetres in diameter was lifted from the bottom of Lake Chebarkul. These fragments are now being studied by scientists.
Quelle: ITAR TASS
« Zum vorherigen Eintrag Zum nächsten Eintrag »
4125 Views
Created with page4