Cosmonauts Oleg Kotov and Sergey Ryazanskiy are seen posing with the Olympic torch during a Nov. 9, 2013 spacewalk outside the International Space Station. The same torch was used to light the Olympic Cauldron in Sochi, Russia. (Roscosmos)

Russian star athetes Irina Rodnina and Vladislav Tretiak use the Olympic torch that flew to the International Space Station to light the Olympic Cauldron in Sochi, Russia. (Winter Olympic Games)

As the XXII Winter Olympic Games begin in Sochi, Russia, the athletes who compete must turn their eyes to the sky to see how far the torch that is lighting the Olympic flame has traveled.
This torch, which has journeyed farther than any torch in Olympic relay history, arrives at Fisht Stadium in Sochi on the shores of the Black Sea. The traditional relay began in late September in Olympia, Greece. The torch, which in fact has been a succession of torches, traveled more than 40,000 miles through 2,900 towns and villages in 83 regions of Russia, to the top of Europe’s highest mountain, Mount Elbrus, in the western Caucasus mountain range, to the depths of Siberia’s Lake Baikal.
The symbol of peace, friendship, hope and understanding among the nations participating in the Olympic Games traveled by car, plane, reindeer and train, and by what arguably was its most unusual mode of transportation, a Russian Soyuz rocket that ferried it into space to the International Space Station, itself a symbol of peaceful international cooperation.
More than 14,000 people served as torchbearers during the relay, including Russian cosmonauts Mikhail Kornienko, who next year will launch with NASA astronaut Scott Kelly to spend one year on the station; Sergey Krikalev, head of the Gagarin Cosmonaut Training Center; and Valentina Tereshkova, the first woman to fly in space, who last year marked the 50th anniversary of her ground-breaking mission.
But it was Soyuz Commander Mikhail Tyurin of the Russian Federal Space Agency (Roscosmos), Rick Mastracchio of NASA and Koichi Wakata of the Japan Aerospace Exploration Agency who made the longest – and fastest -- leg of the relay, carrying the torch 260 miles into space at speeds up to 17,500 mph, launching Nov. 7 from the Baikonur Cosmodrome in Kazakhstan.
Six hours after launch, the Soyuz docked to the Rassvet module on the Earth-facing port of the Russian segment of the complex. Two hours later, hatches opened between the Soyuz and the station, enabling Tyurin and his Soyuz crewmates to float inside and present the torch to the six Expedition 37 crew members residing on the orbiting laboratory.
Two days later, on Nov. 9, Expedition 37 Flight Engineers Oleg Kotov and Sergey Ryazanskiy of Roscosmos suited up in Russian Orlan spacesuits and floated out of the Pirs airlock, carrying the torch with them for a high-flying photo opportunity at the beginning of a 5-hour, 50-minute spacewalk to prepare the Russian segment components for future assembly work.
Back inside after the spacewalk, the torch was used by Kotov as he ran with it on a treadmill exercise device to simulate a marathon. It also was used to document a mock relay by the nine Russian, U.S., Japanese and European crew members on board as each three-person crew took turns floating with the torch down the length of the massive outpost.
Finally, it was time to pack up the torch for its trip home. Expedition 37 Commander Fyodor Yurchikhin of Roscosmos, NASA astronaut Karen Nyberg and European Space Agency astronaut Luca Parmitano climbed into their Soyuz spacecraft with the torch safely stowed away on Nov. 11 and undocked from the station. Just hours later, they made a parachute-assisted landing on the steppe of Kazakhstan southwest of the city of Karaganda, bringing home the symbol of the Olympics and handing it off to Russian space officials to enable it to resume its land-based journey toward its final destination --Sochi.
As the torch is used to light the Olympic flame in Sochi, and symbolizes harmony and goodwill throughout the games, the space station will remain one of the brightest objects in the night sky, a beacon of international cooperation and research providing tangible benefits for all humanity.
. 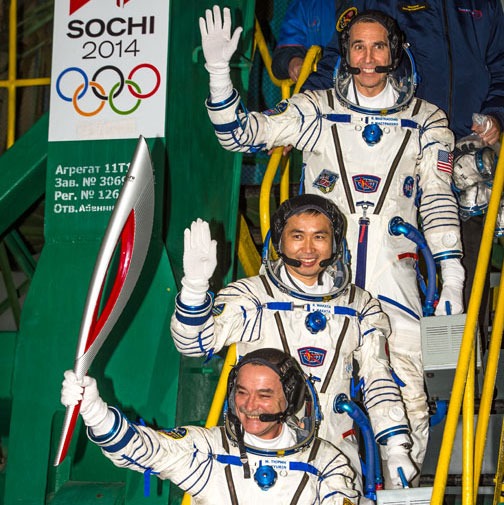 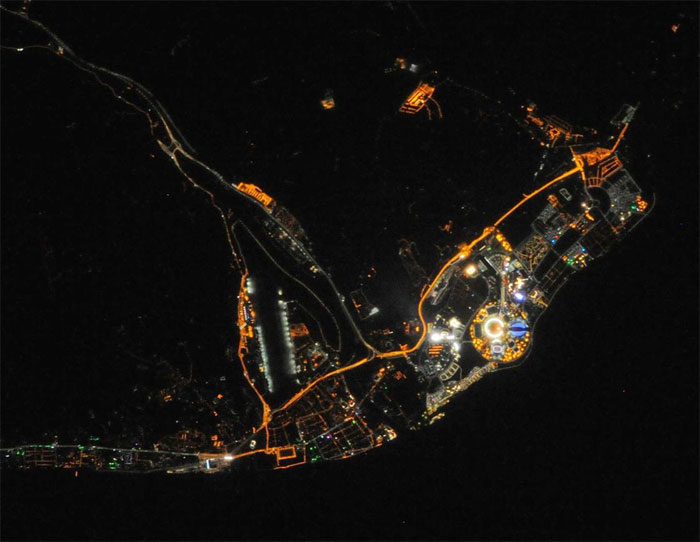 Wow! Sochi's Olympic Lights Look Dazzling From Space
BY ALAN BOYLE
The International Space Station's astronauts are snapping fantastic pictures of the Sochi Olympics from 260 miles away. That's how high the orbital outpost was flying above the Russian Black Sea site when the glow of Sochi's night lights was captured this week by a space station crew member, using a Nikon 3DS camera equipped with a 600mm lens.
The brightly lit circular area toward the right side of the image is Sochi's "coastal cluster." You should be able to make out the blue glow of Fisht Olympic Stadium, site of the opening ceremonies, as well as the egg-shaped profile of Medal Plaza. But if you need a little help, check out this daytime satellite view of Sochi, plus this map of the coastal cluster.
Quelle: NBC
.
Update: 13.02.2014
.
Sochi Olympic gold medalists to get bonus meteorite medal

Olympic athletes placing gold on Saturday, Feb. 15, 2014 at the Sochi Winter Games will be conferred a bonus medal adorned with a fragment of the 2013 Chelyabinsk meteorite.
.
February 12, 2014 — What is better than winning gold at the Olympics? Winning gold at the Winter Olympic Games in Sochi, Russia on Saturday (Feb. 15) — because on that day, and that day alone, earning a gold medal also means being awarded a piece of a rock that fell from space.
Saturday marks exactly one year since a small near-Earth asteroid entered the Earth's atmosphere over Russia and exploded over the Chelyabinsk Oblast (region). Regarded as the most widely-witnessed strike in modern history, the Chelyabinsk meteor was also the largest recorded natural object to have fallen from space since 1908.
The space rock broke into hundreds, if not thousands, of small fragments, which rained down over the area's snow-covered fields. Over the past year, many fragments of the Chelyabinsk meteorite have been recovered, with some of the pieces heading to labs for study, many landing on the collectors' market, others going to museums and a small set being placed aside for a special set of medallions.
Ten of those medals will be presented to those who place gold at the Sochi 2014 Olympics on the anniversary of the Chelyabinsk meteor fall.
.

Artwork for the meteorite medals to be presented to Sochi 2014 Olympic athletes by Chelyabinsk Oblast officials.
.
"We will hand out our medals to all the athletes who will win gold on that day [Feb. 15], because both the meteorite strike and the Olympic Games are global events," Alexei Betekhtin, culture minister for the Chelyabinsk region, said in a statement.
In total, 50 of the meteorite-adorned medallions have been minted. In addition to the those that will be awarded to the Olympic committees of those nations whose athletes win gold medals Saturday, one is being given to the regional Chelyabinsk museum, another will stay in Sochi and the remainder will be offered to private collections.
The medallions, which were crafted out of gold and silver, feature a design that was inspired by the footage of the meteor's fall as captured by car-mounted dash cams. The videos from that day quickly went viral, shared across the planet by social media.
The meteorite pieces are affixed in a small indentation at the center of the medals.
The meteorite medals are not replacing the Olympic gold medals awarded to athletes on Saturday, contrary to some media reports. The Chelyabinsk medals will be presented to the athletes separately and not as part of the traditional podium ceremony.
The ten meteorite-embedded awards will be bestowed to the gold medal athletes competing in speedskating (men's 1500), short-track speedskating (women's 1000 and men's 1500), cross-country skiing (women's relay), ski jumping (men's K-125), Alpine skiing (women's super giant slalom) and skeleton (men's) events.
Today, small fragments (2 to 3 grams) of the Chelyabinsk meteorite sell for $50 to $75. Larger fragments (between 5 and 10 grams) typically sell for $200 and above.
The shock wave from the meteor damaged thousands of buildings in the Chelyabinsk Oblast, resulting in more than 1,500 people seeking medical help. Injuries ranged from cuts due to shattered glass windows, eye pain due to the brightness of the flash, ultraviolet burns and, in one of two serious injuries reported, a broken spine.
The damage from the meteor explosion was estimated by the oblast's governor to be more than one billion rubles (or about $33 million US).
Quelle: collectspace
meteorite medal
« Zum vorherigen Eintrag Zum nächsten Eintrag »
3762 Views
Created with page4