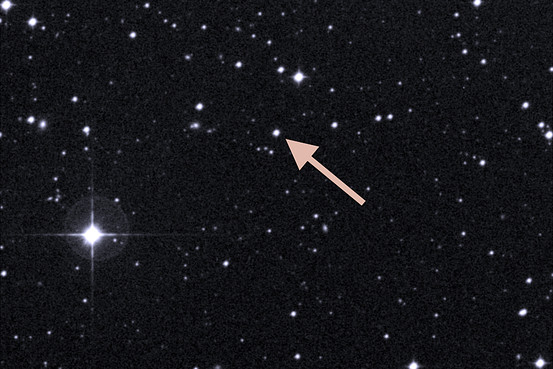 This handout photograph from the Space Telescope Science Institute shows a star discovered by a team led by Dr. Stefan Keller with the SkyMapper telescope at the Siding Spring Observatory near Coonabarabran, New South Wales, Australia. The Australian astronomers said the star is 13.6 billion years old, making it the oldest identified to date.

CANBERRA, Australia—Astronomers in Australia have identified what they say is the oldest known star, estimating it was formed 13.6 billion years ago.
The astronomers said they found the star in the Milky Way galaxy, relatively close to the Earth, around 6,000 light years away. It is a few hundred million years younger than the universe and 400 million years older than a star identified in recent years by teams of astronomers in the U.S. and Europe.
Its age was determined by analyzing its iron content, the Australian team said in an article in the science journal Nature.
"The telltale sign that the star is so ancient is the complete absence of any detectable level of iron in the spectrum of light emerging from the star," said Stefan Keller, the operational scientist at Australian National University's Mount Stromlo SkyMapper Observatory.
The star—spotted on Jan. 2 during an operation to digitally map the Southern Hemisphere sky and dubbed SMSS J031300.36-670839.3—is believed to be part of a second generation of stars, Mr. Keller said. It was formed from debris thrown out by a massive star that died out quickly.
"They were really massive objects that lived fast and died young. They had large explosions, and the shock wave from those first stars gave rise to this star that we are observing now," he said. "It unambiguously incorporates material from the first stellar generation."
The primordial star that gave rise to a second-generation star probably had a mass 60 times as large as our sun and exploded with less energy than might be expected, Dr. Keller said. That allowed a subsequent black hole to swallow most of its heavy elements before another star eventually formed nearby.
Iron and other relatively heavy elements gradually build up in successive stars born from supernovae, with the composition of our own sun indicating it was formed from hundreds of cycles of explosion, formation and re-formation.
All stars act like time capsules, Dr. Keller said, and SMSS J031300.36-670839.3 sheds light on the gas composition of the universe as it was 13.6 billion years ago.
"It tells us a lot about what those first stars were," he told Australian radio. "To form a star like the one we've located, there was likely only one supernova."
Professor Mike Bessell, who spotted the star while analyzing mapping data, said the light spectrum showed only a handful of elements, including hydrogen, carbon, magnesium, and calcium, which made its composition radically different from our sun's. The calcium, in particular, was what astronomers had expected from second-generation stars formed from progenitors consisting of hydrogen and helium.
SMSS J031300.36-670839.3 was one of 60 million photographed by the SkyMapper telescope in its first year of operation, Mr. Bessell said. Its discovery has since been confirmed by the team using the giant Magellan telescope in Chile.
"There's likely to be more stars like this, but they are very hard to find," he said. "We have to sort through vast amounts of data to find the very few of them that are out there. It's a needle in a haystack."
Quelle: THE WALL STREET JOURNAL
.

13.6bn-year-old heavenly body is a time capsule that allows scientists to study the chemistry of the first stars

A team of scientists at the Australian National University has discovered the oldest known star in the universe.
The discovery of the heavenly body, which formed about 13.6bn years ago, has allowed astronomers to study the chemistry of the first stars.
Lead researcher Dr Stefan Keller of the ANU’s Research School of Astronomy and Astrophysics called the find a “one in a 60m chance”.
“I was pleasantly surprised,” Keller said. “It was very much a needle-in-a-haystack situation.”
The team discovered the star using the university’s SkyMapper telescope at the Siding Spring observatory near Coonabarabran in northern New South Wales.
The wide-field telescope is being used to search for ancient stars as part of a project to produce the first digital map of the southern sky.
At the heart of the telescope is a digital camera that uses 268m pixels to capture an area of sky 29 times larger than the full moon every minute.
“Just by imaging the colours of stars, we can tell which stars are prime candidates of being the oldest,” Keller said. “We can tell how much iron it has – the more iron, the younger the star.
“In the case of the star we have announced, the amount of iron present is a factor of at least 60 times less than any other star.”
He described the discovery as a “time capsule” providing new information that defied earlier beliefs about some of the first stars.
He said the newly discovered star had formed in the wake of a primordial star, which had a mass of 60 times that of the sun and died in a supernova explosion.
Keller and his team’s discovery, which was confirmed using the Magellan telescope in Chile, is published in the latest edition of Nature.
Quelle: the guardian
. 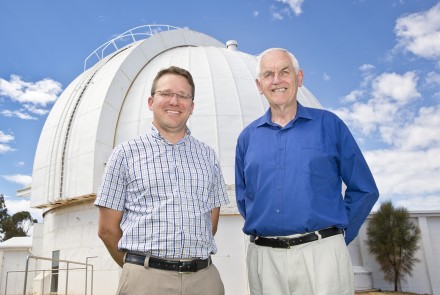 (L to R) lead researcher Dr Stefan Keller and team member Professor Mike Bessell. Photo by David Paterson, ANU
.
A team led by astronomers at The Australian National University has discovered the oldest known star in the Universe, which formed shortly after the Big Bang 13.7 billion years ago.
The discovery has allowed astronomers for the first time to study the chemistry of the first stars, giving scientists a clearer idea of what the Universe was like in its infancy.
“This is the first time that we’ve been able to unambiguously say that we’ve found the chemical fingerprint of a first star,” said lead researcher, Dr Stefan Keller of the ANU Research School of Astronomy and Astrophysics.
“This is one of the first steps in understanding what those first stars were like. What this star has enabled us to do is record the fingerprint of those first stars.”
The star was discovered using the ANU SkyMapper telescope at the Siding Spring Observatory, which is searching for ancient stars as it conducts a five-year project to produce the first digital map the southern sky.
The ancient star is around 6,000 light years from Earth, which Dr Keller says is relatively close in astronomical terms. It is one of the 60 million stars photographed by SkyMapper in its first year.
“The stars we are finding number one in a million,” says team member Professor Mike Bessell, who worked with Keller on the research.
“Finding such needles in a haystack is possible thanks to the ANU SkyMapper telescope that is unique in its ability to find stars with low iron from their colour.”
Dr Keller and Professor Bessell confirmed the discovery using the Magellan telescope in Chile.
The composition of the newly discovered star shows it formed in the wake of a primordial star, which had a mass 60 times that of our Sun.
“To make a star like our Sun, you take the basic ingredients of hydrogen and helium from the Big Bang and add an enormous amount of iron – the equivalent of about 1,000 times the Earth’s mass,” Dr Keller says.
“To make this ancient star, you need no more than an Australia-sized asteroid of iron and lots of carbon. It’s a very different recipe that tells us a lot about the nature of the first stars and how they died.”
Dr Keller says it was previously thought that primordial stars died in extremely violent explosions which polluted huge volumes of space with iron. But the ancient star shows signs of pollution with lighter elements such as carbon and magnesium, and no sign of pollution with iron.
“This indicates the primordial star’s supernova explosion was of surprisingly low energy. Although sufficient to disintegrate the primordial star, almost all of the heavy elements such as iron, were consumed by a black hole that formed at the heart of the explosion,” he says.
The result may resolve a long-standing discrepancy between observations and predictions of the Big Bang.
The discovery was published in the latest edition of the journal Nature.
. 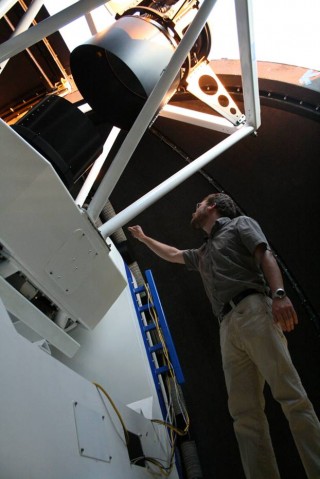