NASA engineers and contractors have successfully completed the Orion Launch Abort System (LAS) tower, marking a milestone that puts NASA one step closer to sending Orion 3,600 miles into space on the uncrewed Exploration Flight Test-1 (EFT-1) mission, scheduled to launch in September 2014. Orion is America’s next generation spacecraft that will carry astronauts to destinations beyond low Earth orbit.

The LAS is designed to protect astronauts if a problem arises during launch, by pulling the Orion spacecraft away from a failing rocket. Its tower awaits the arrival of a fairing assembly that forms an aerodynamic shell for Orion and protects the crew module during launch. Both the LAS and the fairing assembly will be put to the test during EFT-1 – a mission that will not only advance space exploration, but also make critical technological leaps for the nation. Because EFT-1 is an uncrewed mission, only the jettison motor will be active on the LAS. The tower structure will detach itself from the crew module as it would during a normal ascent. This flight test will provide information on the abort system’s performance during the vehicle’s trip to space.
“The Orion Program uses cutting-edge technologies that advance the state of the art," said Kevin Rivers, NASA’s LAS project manager. "For instance, the LAS will be the first actively controlled launch escape system ever flown, and it incorporates a throttleable solid-rocket motor for attitude control, a novel reverse-thrust abort motor, advanced solid propellants, and lightweight composite materials in the abort motor case and fairing."
More than 60 employees from NASA's Langley Research Center in Virginia, NASA's Marshall Space Flight Center in Alabama, and NASA partner Lockheed Martin, helped design and build the LAS.
"It was fun working on this project with a diverse team from all over the country," said Rivers. "Without each person, none of this would have been possible."
The LAS, built and processed at Kennedy Space Center in Florida, is comprised of three motors: the abort, attitude control, and jettison motor.
In a worst-case scenario, the abort motor would propel the crew module away from the launch pad. The attitude control motor would be used to steer the vehicle, producing up to 7,000 pounds of thrust. The jettison motor that will be used during EFT-1 will pull the LAS away from the crew module, allowing its parachutes to deploy and the vehicle to land.
“I’m excited for this mission because we are putting the U.S. back into space with a capability to explore beyond low-Earth orbit and eventually Mars,” said Dr. Roger McNamara, Lockheed’s EFT-1 mission director. “This is the predecessor flight for all the future Orion missions. That’s very exciting to be a part of.”
. 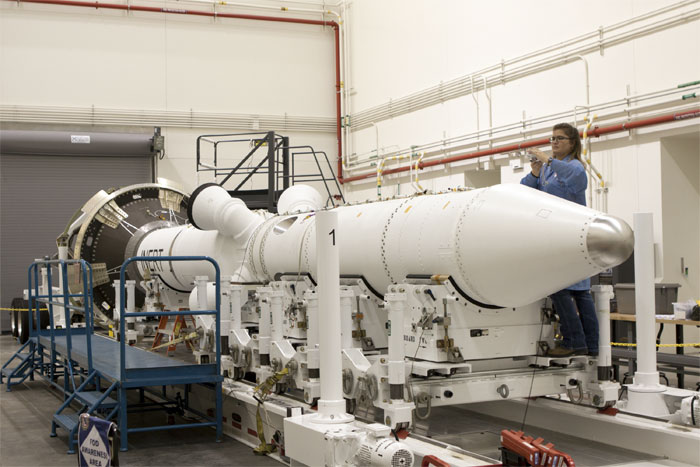 NASA and Lockheed Martin put the final touches on the Launch Abort System tower, integrating each component that will be used during Orion’s Exploration Flight Test-1.
Image Credit: NASA
. 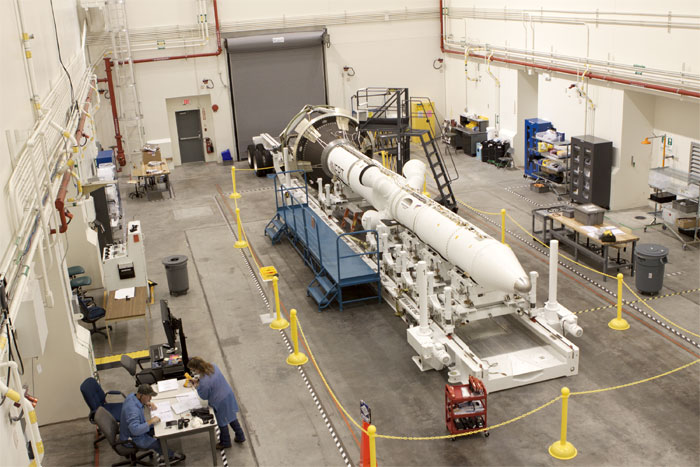