WITH A PRICE TAG OF $250,000, COMMERCIAL SPACE TRAVEL IS NOT A POSSIBILITY FOR THE 99%. SPACE RACE, A NEW MARK BURNETT REALITY SHOW, HOPES TO SEND AN AVERAGE JOE WINNER INTO ORBIT WITH PARTNER VIRGIN GALACTIC.

"Deep Space Homer," a beloved episode of The Simpsons, featured a cash-strapped NASA boosting public interest in the space program by sending ordinary American Homer Simpson into orbit. Turns out, the smart-about-science cartoon was prescient about space travel.
.

.
Legendary television producer Mark Burnett is teaming up with Richard Branson's Virgin Galactic for a new reality show where ordinary Americans compete to fly into space. On NBC's upcoming Space Race, which still doesn't have air or film dates, the winner's grand prize will be a trip into space courtesy of Virgin.
George Whitesides is bullish on a future where space tourism is a fact of life. The CEO of Virgin Galactic and the son of a legendary scientist, Whitesides helms a company whose business plan centers on short trips into space at $250,000 a pop. At a recent presentation at TEDxWallStreet, Whitesides was selling a crowd--many of whom can afford (or have bosses who can afford) to pay the ticket fee for short suborbital space flights--on the virtues of traveling into space. It was an easy sell: the audience was full of science aficionados and thrill junkies who raised their hands eagerly when asked if they'd like to go into space. Virgin Galactic's mission is to make space tourism affordable and doable, and a reality show is just the sort of advertisement they like.
Burnett's partnership really opens the aperture on allowing different kinds of people to do space travel.
Space Race will prominently feature Spaceport America, a massive civilian spaceport and research aircraft facility in the New Mexican desert. Virgin Galactic will use Spaceport as its headquarters; Whitesides told Fast Company in a telephone interview that the company is still putting the finishing touches on the facility and conducting work on its test-flight program. By the time Virgin Galactic flies tourists into space, Burnett's reality show may be able to start taping.
“Burnett's partnership really opens the aperture on allowing different kinds of people to do space travel,” Whitesides said. “There are some moments that are historic in television, space, and human history. The principle for Space Race is to show space travel for everyday people coming from all walks of life.” Space Race is the second attempt by Burnett to do a space tourism reality show; a similar 2000 program called Destination Mir was shuttered when Mir came down from orbit due to Russian financial difficulties.
When conducting marketing and public relations, Virgin's pitch comes down to one thing: The life-changing effects of seeing Earth from space. “99.999% of people on Earth can't afford to fly into space the way NASA does. We've taken that experience and dropped the price between 100 and 1,000 times,” Whitesides added. “For $250,000, it's an enormous price drop which allows many more people to afford that. Tens of thousands of people can look down from space, have a truly profound experience, and look at the Earth from the black sky.”
Burnett, the television legend responsible for genre-defining reality hits like Survivor, The Apprentice, Shark Tank, and many others, knows what makes compelling viewing. But he is a television producer and Virgin Galactic, even with Richard Branson's pedigree and brand name, is a company working in an expensive and dangerous industry where one instance of equipment failure can cause a financial or public relations meltdown. Virgin Galactic recently delayed its first space flights by six months, causing the $212 million Spaceport America considerable financial difficulties. Canadian astronaut Chris Hadfield also noted (in comments which Whitesides, a friend of Hadfield, said were taken out of context) that “eventually they'll crash” one of their spacecrafts. Virgin Galactic is currently the biggest name in the small world of space tourism, and this makes publicity all the more challenging.
While NBC's space travel reality show waits to begin taping, more than 650 customers have paid $250,000 apiece to book flights into space on Virgin's SpaceShipTwo, to briefly experience weightlessness and see Earth from a suborbital vehicle. 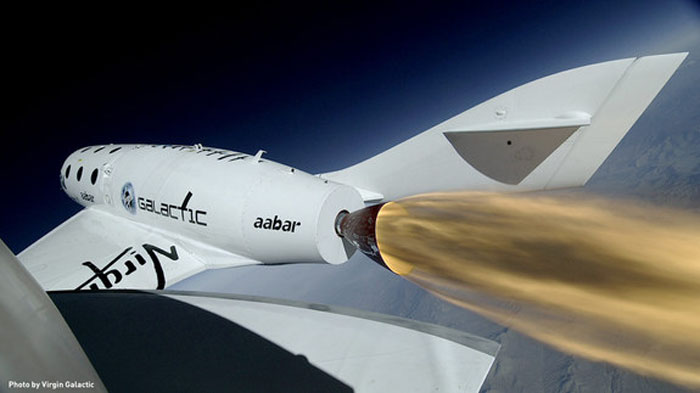 Frame from SpaceShipTwo Boom Camera during first rocket-powered flight on April 29, 2013.
Credit: Virgin Galactic
View full size image
It's official: Virgin Galactic's commercial spaceflight revolution will be televised.
Virgin Galactic's owner, British billionaire Sir Richard Branson, has inked a deal with NBC ensuring that the network will air live coverage of the inaugural flight of the company'sprivate SpaceShipTwo rocket ship, as well as other special programs in the run up to the historic first flight. Branson and NBCUniversal unveiled the deal today (Nov. 8).
Virgin Galactic wants to fly passengers on SpaceShipTwo at $250,00 a ticket. Would you go if you could?
Yes! The first rocket-powered test flight proved its mettle. I'd ride.Maybe - I'd like to see a few more powered test flights before I trust SpaceShipTwo with my life.No way - I'm still not risking my life on a commercial spaceship.
View Results Share This
Branson and his two children, Sam and Holly, will be the first passengers on SpaceShipTwo, which is designed to fly six passengers and two pilots on trips into suborbital space and back for $250,000 a piece. The spacecraft launches from the air after being dropped by its mothership, the huge carrier aircraft WhiteKnightTwo. [Photos: 1st SpaceShipTwo Powered Flight Test]
Virgin Galactic and SpaceShipTwo builders Scaled Composites have been putting the spacecraft through a series of supersonic flight tests this year leading up to the first space launch. The first commercial flight is currently expected to take place in 2014 from Spaceport America in New Mexico.
"Virgin Galactic is thrilled that NBCUniversal will join us on our exciting first journey to space," Branson said in a statement today. "In this first chapter of commercial space travel, we will help make space accessible and inspire countless more people to join us in the pursuit of space exploration and science innovation."
NBC will air a primetime special the night before the flight and a three-hour live event on the "TODAY" show during the flight of the new commercial space plane, NBC representatives said.
"Without a doubt, Sir Richard and his children taking the first commercial flight into space, will go down in history as one of the most memorable events on television," said Sharon Scott, president and general manager of Peacock Productions, said in a statement.
"Through NBCUniversal’s multiple platforms and overseas network partners, viewers from around the world will get to experience this where were you moment; we’re extremely honored to chronicle Sir Richard’s journey and live launch into space," Scott added.
SpaceShipTwo will launch from an altitude of 50,000 feet (15,240 meters) into the air by its White Knight Two. After its release, the suborbital space plane's rocket engine fires for 70 seconds and then shuts down, allowing the plane to coast higher and higher. The spaceship will then reach a peak altitude of 361,000 feet (110,000 m) where the passengers will experience about five minutes of weightlessness.
About 640 would-be space tourists have bought tickets for a SpaceShipTwo rocket ride, including many celebrities.
Lady Gaga plans to fly in space on a Virgin Galactic flight, and announced this week that she will sing on the trip, too. Other stars with SpaceShipTwo tickets include actor Leonardo DiCaprio, Justin Beiber and Ashton Kutcher.
.
Quelle: SpaceCom

"TODAY" to Broadcast Virgin Galactic’s Historic First Commercial Spaceflight LIVE Featuring Sir Richard Branson and His Children
NEW YORK, NY—November 8, 2013 — NBCUniversal today announced an exclusive multi-platform partnership with Sir Richard Branson’s Virgin Galactic, the world’s first commercial spaceline, to televise the inaugural commercial space flight of SpaceShipTwo. Next year, Sir Richard and his children, Holly and Sam, will be the first private passengers to travel into space on SpaceShipTwo from Virgin Galactic’s terminal at Spaceport America in New Mexico. NBC News’ award-winning Peacock Productions will chronicle the journey across a myriad of NBCUniversal brands and platforms including MSNBC, CNBC, SYFY, The Weather Channel and NBCNews.com, culminating in a primetime special airing on NBC the night before launch, and a 3-hour live event on “TODAY,” hosted by Matt Lauer and Savannah Guthrie.
“Without a doubt, Sir Richard and his children taking the first commercial flight into space will go down in history as one of the most memorable events on television,” said Sharon Scott, President and General Manager, Peacock Productions. “Through NBCUniversal’s multiple platforms and overseas network partners, viewers from around the world will get to experience this where were you moment; we’re extremely honored to chronicle Sir Richard’s journey and live launch into space.”
“Virgin Galactic is thrilled that NBCUniversal will join us on our exciting first journey to space,” said Sir Richard. “In this first chapter of commercial space travel, we will help make space accessible and inspire countless more people to join us in the pursuit of space exploration and science innovation.”
About Peacock Productions
Peacock Productions is an award-winning, nonfiction production company that combines the editorial expertise, technical resources and seasoned production talent of NBCUniversal. It offers a wide-range of programming to broadcast, cable and digital entities with worldwide reach. To learn more, please visit peacockproductions.tv.
About Virgin Galactic
Owned by Sir Richard Branson’s Virgin Group and aabar Investments PJS, Virgin Galactic is on track to be the world’s first commercial spaceline. To date, the company has accepted nearly $80 million in deposits from approximately 640 individuals, which is approximately 10% more than the total number of people who have ever gone to space. The new spaceship (SpaceShipTwo, VSS Enterprise) and carrier craft (WhiteKnightTwo, VMS Eve) have both been developed for Virgin Galactic’s vehicle fleet by Mojave-based Scaled Composites. Founded by Burt Rutan, Scaled developed SpaceShipOne, which in 2004 claimed the $10 million Ansari X Prize as the world’s first privately developed manned spacecraft. Virgin Galactic’s new vehicles, which will be manufactured by The Spaceship Company in Mojave, Calif., share much of the same basic design, but are being built to carry six customers, or the equivalent scientific research payload, on suborbital space flights. The vehicles will allow an out-of-the-seat, zero-gravity experience with astounding views of the planet from the black sky of space for tourist astronauts and a unique microgravity platform for researchers. The VSS Enterprise and VMS Eve test flight program is well under way, leading to Virgin Galactic commercial operations, which will be based at Spaceport America in New Mexico.
Quelle: Virgin
« Zum vorherigen Eintrag Zum nächsten Eintrag »
3822 Views
Created with page4