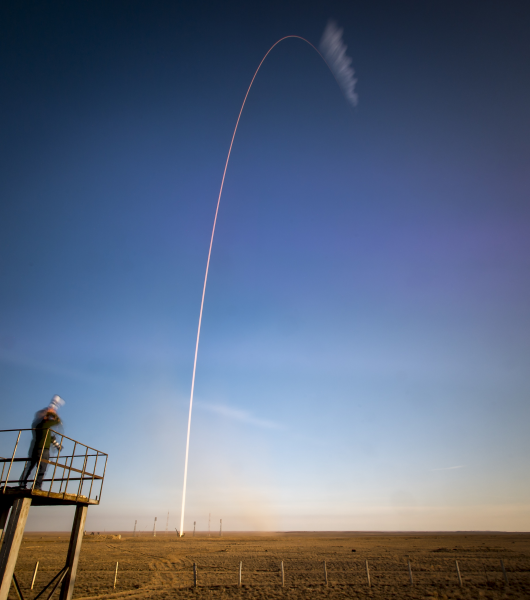 Arcing Towards Orbit
In this two-minute exposure, the Soyuz TMA-11M rocket heads from Baikonur Cosmodrome in Kazakhstan towards orbit with Expedition 38 Soyuz Commander Mikhail Tyurin of Roscosmos, Flight Engineer Rick Mastracchio of NASA and Flight Engineer Koichi Wakata of the Japan Aerospace Exploration Agency onboard.  The trio launched Thursday, Nov. 7, 2013 (Nov. 6 in the U.S.), bound for a docking at the International Space Station about six hours later.
Tyurin, Mastracchio and Wakata will spend the next six months aboard the orbiting laboratory.
Credit: NASA/Bill Ingalls
. 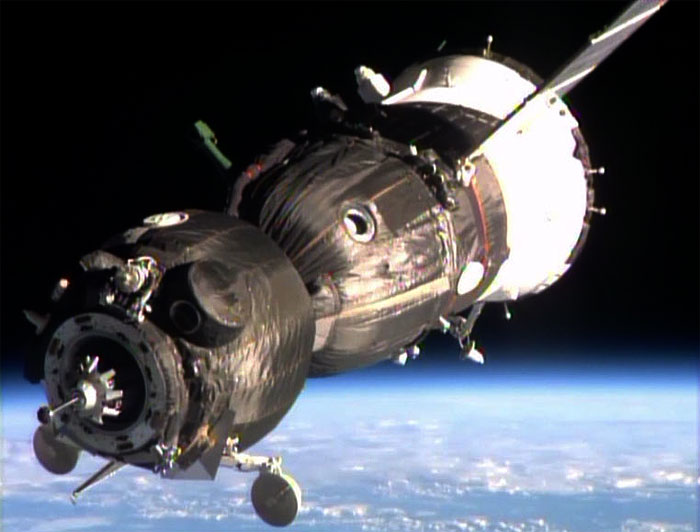 This will be the first time since October 2009 that nine people have resided on the station without the presence of a space shuttle. However, just four days later the station residents will say goodbye to Yurchikhin, Nyberg and Parmitano, all Expedition 37 crew members, when they undock in the Soyuz TMA-09M spacecraft and land in Kazakhstan about 3-1/2 hours later.
When the Expedition 37 trio returns home this Sunday they will have completed a 5-1/2 month stay in space. The station's newest Expedition 38 trio will live and work in space until May 2014.
Expedition 38 officially begins when the home-bound trio undocks. Kotov will become station commander for the second time since Expedition 23 in 2010. Staying behind are veteran station residents Mikhail Tyurin and Koichi Wakata; Rick Mastracchio, a veteran of three shuttle missions; and Mike Hopkins and Sergey Ryazanskiy, who are both on their first missions.
All nine crew members will participate in a joint crew news conference Friday Nov. 8 at 8:50 a.m. during their very busy four days together. The crew will talk about the upcoming 15th anniversary of the space station's construction (the station has been continuously occupied for 13 years).They will also discuss the spacewalk that takes place the very next day when Kotov and Ryazanskiy carry the Olympic torch outside the station. The torch, delivered by Expedition 38 and returning home with Expedition 37, will light the flame at the opening of the 2014 Winter Olympic Games in Sochi, Russia.

Astronaut Wakata begins his ISS expedition mission!
The Soyuz Spacecraft with Astronaut Koichi Wakata onboard lifted off at 1:14 p.m.on Nov.7 (Thu., Japan Standard Time,) and docked with the International Space Station (ISS) at 19:27 on the same day. After the hatch to the ISS opened at 21:44, Astronaut Wakata's fourth expedition mission began.
Astronaut Wakata will stay at the ISS for about six months as a crew member of Expeditions 38 and 39 to conduct scientific experiments and other missions. He will also play an important role as the first Asian commander of the ISS to lead a team of astronauts with the spirit of harmony (or "Wa" in Japanese) that is highly regarded by the Japanese.
.

.
Comment by JAXA President
Astronaut Wakata Commences his Long-Duration Stay on the ISS
(After the hatch opening)
The Soyuz TMA-11M spacecraft launched from the Baikonur Cosmodrome at 13:14, November 7, 2013, has succeeded in docking to the ISS at 19:27 today. Now Japanese Astronaut Wakata's 6-month on-orbit stay has begun. This will be his forth space flight including his Space Shuttle missions, and the second long-duration stay on the ISS.
In the middle of next March, Astronaut Wakata will be the first Japanese who is installed as the ISS Commander, and he conducts the six crews of Increment 39. The Commander Wakata takes the full responsibility for the on-orbit activities and the crews' safety. In addition, Wakata is expected to engage in various experimental operations, such as deploying the small satellites brought by "KOUNOTORI 4" (HTV4) last August, and docking/releasing "Dragon" and "Cygnus" as the "Specialist of the RMS".
I strongly believe that he will demonstrate his ability built by the series of the hard trainings. Also as the ISS Commander, he will accomplish the duties on the ISS and "KIBO" with the fellow astronauts of the US and Russia.
I sincerely express my deep thanks to the National Aeronautics and Space Administration (NASA), the Russian Federal Space Agency (FSA), all other domestic and overseas organizations, and all the individuals for their efforts and support to us. I hope you will continue cooperating with us.
Thank you.
November 7, 2013
Naoki Okumura
President
Japan Aerospace Exploration Agency (JAXA)
Quelle: JAXA
« Zum vorherigen Eintrag Zum nächsten Eintrag »
3379 Views
Created with page4