Newly declassified documents reveal more detail about past use of the mysterious Nevada test site known as Area 51 and the concern for maintaining secrecy about the work done at the facility.
The recently released papers, which date mostly from the early 1960s into the 1970s, spotlight the U.S. government's desire for tight security at Area 51, also known as Groom Lake. The area was photographed with American reconnaissance assets to better assess what the Soviet Union's spy satellites might be able to discern.
The documents also detail the debate over the possible release of a photograph "inadvertently" taken of the secret facility by NASA astronauts aboard the Skylab space station in 1974. [Flying Saucers to Mind Control: 7 Declassified Military & CIA Secrets]
.
Flying Saucers to Mind Control: 7 Declassified Military & CIA Secrets 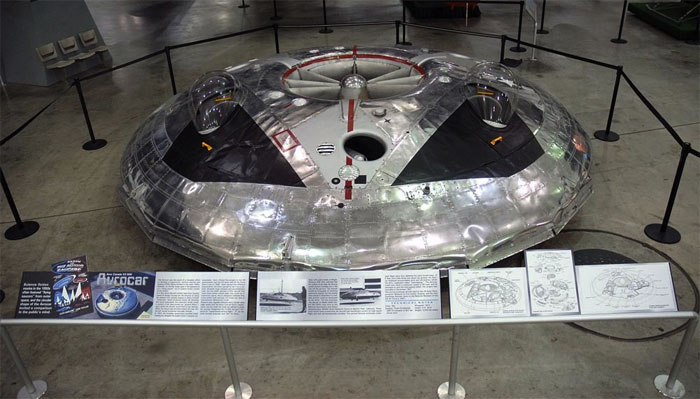 Government and military secrets can range from terrifying to amusing to downright absurd, but most are nothing short of intriguing. From a secret U.S. Air Force project to build a supersonic flying saucer to a now-famous World War II-era research program that produced the first atomic bombs, here are seven declassified military or CIA secrets.
. 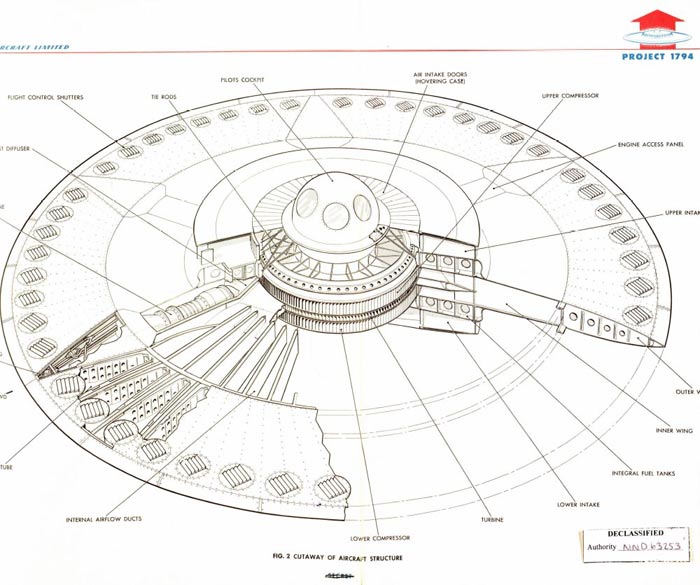 In late 2012, the U.S. Air Force declassified a trove of documents, including records of a secret program to build a flying saucer-type aircraft designed to shoot down Soviet bombers. The ambitious program, called Project 1794, was initiated in the 1950s, and a team of engineers was tasked with building a disc-shape vehicle capable of traveling at supersonic speeds at high altitudes.
The declassified documents reveal plans for the plane to reach a top speed of Mach 4 (four times the speed of sound), and reach an altitude of 100,000 feet (30,480 meters). The project's estimated cost was more than $3 million, which in today's dollars would be more than $26 million.
Project 1794 was canceled in December 1961 after tests suggested the flying saucer design was aerodynamically unstable and would likely be uncontrollable at high speeds (let alone supersonic speeds).
. 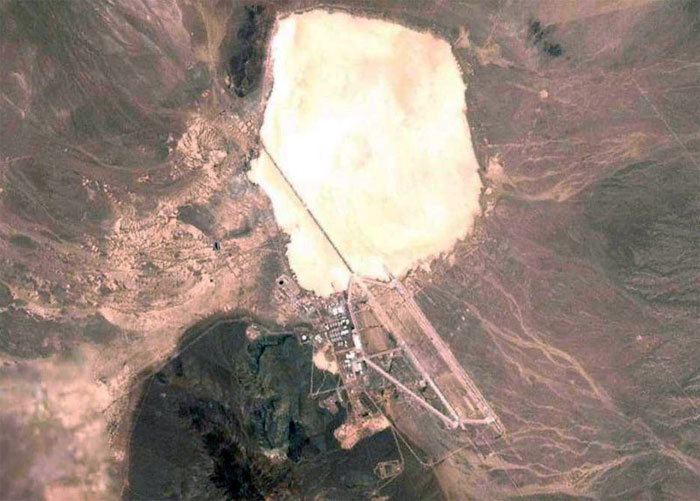 Almost no other site has garnered as much attention from conspiracy theorists and UFO-enthusiasts as Area 51, a remote desert tract near Groom Lake in Nevada, roughly 83 miles (134 kilometers) northwest of Las Vegas. The intense secrecy surrounding the base sparked peoples' imaginations, and Area 51 was commonly linked to paranormal activities, including pervasive theories that suggested Area 51 hid aliens and UFOs.
In July 2013, declassified documents from the CIA acknowledged the existence of Area 51 for the first time, and confirmed that the top-secret site was used to test a variety of spy planes, including the well-known U-2 reconnaissance aircraft.
While Area 51, which operates as a detachment of Edwards Air Force Base in neighboring California, has never been declared a covert base, the research and activities conducted there were some of the nation's most closely guarded secrets.
.
Project Grudge 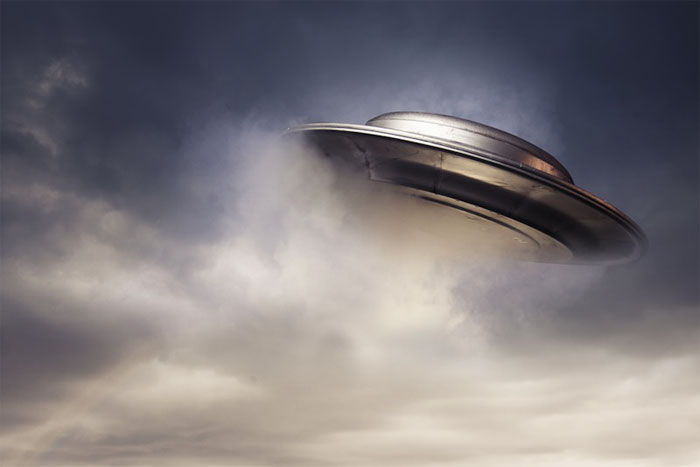 While Area 51 was not a top-secret base designed to study extraterrestrials, the U.S. Air Force did study the existence of UFOs. Project Grudge was a short-lived program launched in 1949 to study unidentified flying objects. The mission followed an earlier program, known as Project Sign, which published a report in early 1949 stating that while some UFOs seemed to be actual aircraft, there was not enough data to determine their origins.
Critics of Project Grudge said the program solely set out to debunk UFO reports, and very little actual research was conducted. In his book on the topic, Edward J. Ruppelt, Air Force Captain and director of Project Grudge, wrote: "[I]t doesn't take a great deal of study of the old UFO files to see that standard intelligence procedures were not being followed by Project Grudge. Everything was being evaluated on the premise that UFOs couldn't exist. No matter what you see or hear, don't believe it."
.
Stealthy work
More than 60 declassified documents in an Area 51 file were posted on the Internet by the National Security Archive late last month, compiled and edited by archive senior fellow Jeffrey Richelson. The archive is located at The George Washington University in Washington, D.C.
Those of you hoping for information about captured aliens and flying saucers will be disappointed.
A number of documents focus on the quest to develop stealth capability in aircraft. Others report on another type of activity at Area 51 — the exploitation of covertly acquired Soviet MiG fighter jets.
American engineers assessed the design, performance and limitations of MiGs in an attempt to learn their vulnerabilities — knowledge that could come in handy during combat situations.
Spysat overflights
An April 1962 document sourced to the National Reconnaissance Office (NRO) outlines the rationale for photographing Area 51 by either a high-flying U-2 spy plane or a then-classified CORONA reconnaissance satellite. The idea was viewed as a means of seeing what the Soviet Union might learn from its own satellite images of the facility.
This would provide "a pretty fair idea of what deductions and conclusions could be made by the Soviets should Sputnik 13 have a reconnaissance capability," explains the memorandum, which was marked "secret." [Gallery: Declassified US Spy Satellite Photos & Designs]
Also part of the plan, the memo states, was having a U-2 image Area 51: "Without advising the photographic interpreters of what the target is, ask them to determine what type of activity is being conducted at the site photographed," the memo states.
.
Skylab
Also of interest is another document, dated April 11, 1974, from the deputy director of the NRO to the chairman of the director of central intelligence's Committee on Imagery Requirements and Exploitation. This memorandum discusses what to do about a photograph taken by Skylab astronauts of Area 51, outlining the issues to be considered in deciding whether or not to release the photograph.
The two-page document, marked "Top Secret," mentions a draft decision paper that focuses on the "relative merits of retaining [deleted in document] as a high-priority secret national security installation versus the merits of the NASA belief that there would be domestic and foreign problems created by withholding the photograph."
The April 1974 memo also says that the Skylab photograph "in the public domain would almost certainly provide strong stimulus for media questioning and the potential near-term revelation of the missions of the installation." 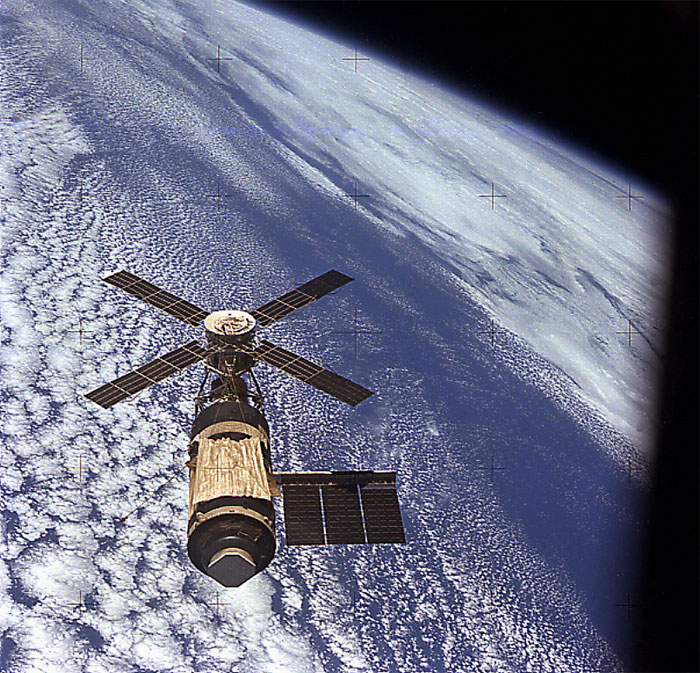 Skylab astronauts took this photograph as they approached the orbiting laboratory on the the third and final mission, known as Skylab 4, in November 1973.
.
Unclassified platform
.
A follow-up memorandum from April 19, 1974, marked "Confidential" for then-Director of Central Intelligence William Colby, explains that the recent Skylab mission "inadvertently photographed" Area 51, and that there were "specific instructions not to do this."
The memo also reports that the Skylab photo is the subject of an interagency review and that Department of Defense officials believed it should be withheld from public release.
At the time, NASA — and, to a large extent, the State Department — took the position that the image should be released. It would be allowed to go into a repository in Sioux Falls, S.D., that contained satellite remote sensing data of the Earth's land surface and "let nature take its course," the memo states.
.
Complex issues
.
The April 19 memo explains that there are some complicated precedents that should be reviewed before a final decision could be made about the Skylab image. For example, there was a question of whether anything photographed in the U.S. can be classified if the platform from which the image was taken, such as NASA's Skylab, is unclassified.
In addition, the April 19 memo notes that there are some complex issues in the United Nations concerning U.S. policies about imagery from space. Further, the document raises the question of whether or not the photo would be leaked anyway, even if it were withheld.
The memo also carries handwritten responses by the CIA's Colby.
Colby expressed some doubts about the need to protect the image, since the Soviet Union had it from their satellites anyway. He further asked, "If exposed, don't we just say classified USAF [U.S. Air Force] work is done there?"
. 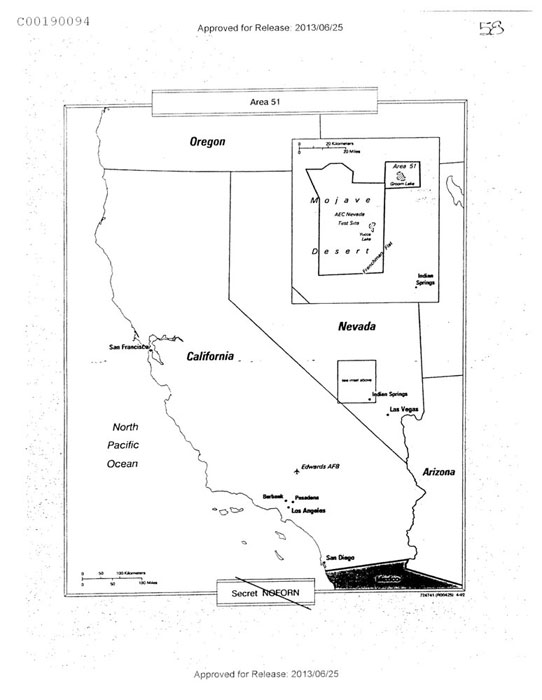 The CIA's declassified map of Groom Lake/Area 51
Credit: National Security Archive
.
Hide and seek
.
Dwayne Day, an American space historian, policy analyst and author, has previously written on Area 51, as well as the 1974 Skylab image flap.
It turns out that the Skylab shot of Area 51 was placed in NASA's collection of Skylab photographs, Day said, but nobody had noticed. So, in the end, NASA won its argument with the intelligence community over the image, he said.
As for playing Cold War hide-and-seek at Area 51 with the Soviet Union, Day said the Soviets had spy satellitesand that they could certainly see the airfield.
"But, of course, the CIA knew the flight paths of Soviet satellites, and they would avoid having their aircraft in the open when satellites were overhead," Day told SPACE.com. "The best form of concealment is a big hangar where you can park all your planes."
Day said that there has been at least one report of an effort at Groom Lake to create a fake heat signature for orbiting satellites to see.
"I have my doubts about that," Day said. "The timing is wrong — too early for anybody to expect the Soviet Union to be capable of that kind of infrared observation."
Day said he's also wondered about a photograph taken at Area 51 showing a line of A-12 OXCART spy planes, probably from 1964. OXCART was the label given to the CIA's A-12 program, meant to come after the U-2 to perform reconnaissance flights over the Soviet Union.
"The Soviets did not always have reconnaissance satellites in orbit," Day said, "so did the CIA line these planes up for a beauty shot when they knew that they were safe from observation? Or, did they simply not care?"
. 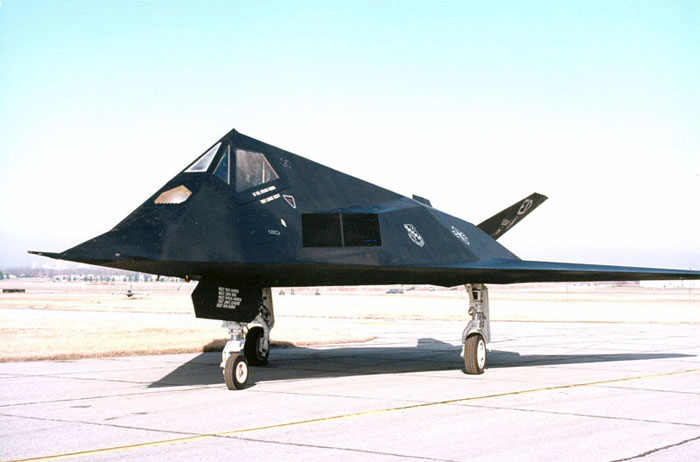