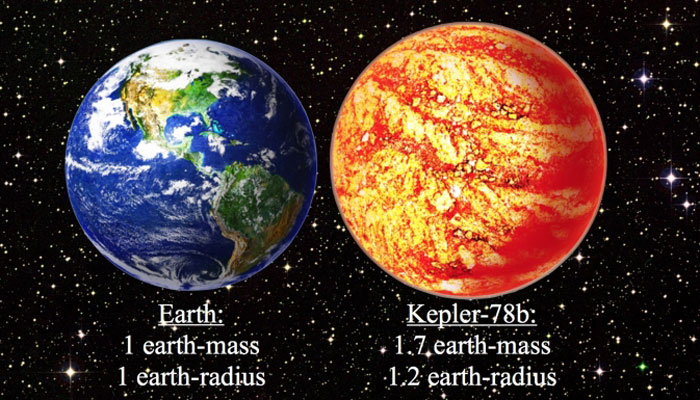 This illustration compares Earth with the newly confirmed scorched world of Kepler-78b. Kepler-78b is about 20 percent larger than Earth and is 70% more massive. Kepler-78b whizzes around its host star every 8.5 hours, making it a blazing inferno. Credit: David A. Aguilar (CfA)

Astronomers have discovered the first Earth-sized planet outside the solar system that has a rocky composition like that of Earth. Kepler-78b whizzes around its host star every 8.5 hours, making it a blazing inferno and not suitable for life as we know it. The results are published in two papers in the journal Nature.
"The news arrived in grand style with the message: 'Kepler-10b has a baby brother,'" said Natalie Batalha, Kepler mission scientist at NASA's Ames Research Center in Moffett Field, Calif.  Batalha led the team that discovered Kepler-10b, a larger but also rocky planet identified by the Kepler spacecraft.
"The message expresses the joy of knowing that Kepler's family of exoplanets is growing," Batalha reflects. "It also speaks of progress. The Doppler teams are attaining higher precision, measuring masses of smaller planets at each turn.  This bodes well for the broader goal of one day finding evidence of life beyond Earth."
Kepler-78b was discovered using data from NASA’s Kepler space telescope, which for four years simultaneously and continuously monitored more than 150,000 stars looking for telltale dips in their brightness caused by crossing, or transiting, planets.
Two independent research teams then used ground-based telescopes to confirm and characterize Kepler-78b. To determine the planet's mass, the teams employed the radial velocity method to measure how much the gravitation tug of an orbiting planet causes its star to wobble. Kepler, on the other hand, determines the size or radius of a planet by the amount of starlight blocked when it passes in front of its host star.
A handful of planets the size or mass of Earth have been discovered. Kepler-78b is the first to have both a measured mass and size. With both quantities known, scientists can calculate a density and determine what the planet is made of.
Kepler-78b is 1.2 times the size of Earth and 1.7 times more massive, resulting in a density that is the same as Earth's. This suggests that Kepler-78b is also made primarily of rock and iron. Its star is slightly smaller and less massive than the sun and is located about 400 light-years from Earth in the constellation Cygnus.
One team led by Andrew Howard from the University of Hawaii in Honolulu, made follow-up observations using the W. M. Keck Observatory atop Mauna Kea in Hawaii.The other team led by Francesco Pepe from the University of Geneva, Switzerland, did their ground-base work at the Roque de los Muchachos Observatory on La Palma in the Canary Islands.
This result will be one of many discussed next week at the second Kepler science conference Nov. 4-8 at Ames. More than 400 astrophysicists from Australia, China, Europe, Latin America and the US will convene to present their latest results using publicly accessible data from Kepler.
.
Quelle: NASA
. 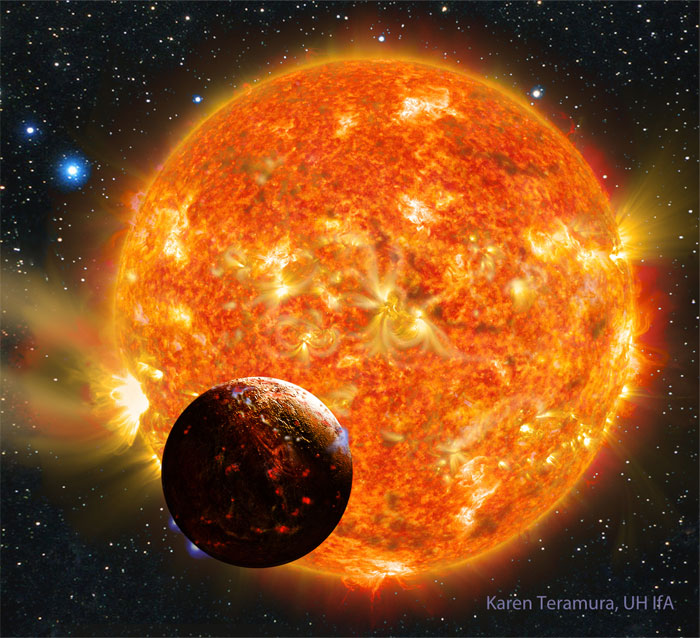 A team of astronomers has found the first Earth-sized planet outside the solar system that has a rocky composition like that of Earth. This exoplanet, known as Kepler-78b, orbits its star very closely every 8.5 hours, making it much too hot to support life. The results are being published in the journal Nature.
This Earth-sized planet was discovered using data from NASA’s Kepler Space Telescope, and confirmed and characterized with the W. M. Keck Observatory.
Every 8.5 hours the planet passes in front of its host star, blocking a small fraction of the starlight. These telltale dimmings were picked up by researchers analyzing the Kepler data.
The team led by Dr. Andrew Howard (Institute for Astronomy, University of Hawaii at Manoa) then measured the mass of the planet with the Keck Observatory on Mauna Kea, in Hawaii. Using the ten-meter Keck I telescope fitted with the HIRES instrument, the team employed the radial velocity method to measure how much an orbiting planet causes its star to wobble, to determine the planet’s mass. This is another excellent example of the synergy between the Kepler survey, which has identified more than 3,000 potential exoplanet candidates, and Keck Observatory, which plays a leading role in conducting precise Doppler measurements of the exoplanet candidates.
A handful of planets the size or mass of Earth have been discovered recently. This is the first one with both quantities measured. “When you have both the size and the mass of an object, you can calculate its density, and thereby determine what it is made of,” explained Howard.
With a radius about 1.2 times that of Earth and a mass equal to about 1.7 times Earth’s, Kepler-78b has a density that is the same as Earth’s, suggesting that it also made primarily of rock and iron. Its star is slightly smaller and less massive than the sun and is located about 400 light-years from Earth in the constellation Cygnus.
Kepler-78b is a member of a new class of “ultrashort period” planets recently identified by the Kepler spacecraft.  These newfound worlds all orbit their stars with orbital periods of less than 12 hours.  They’re also small, about one-to-two times the size of Earth.  Kepler-78b is the first planet in this new class to have its mass measured. It is a mystery how these planets formed and made it so close to their host stars (only 1 percent of the Earth-sun separation in the case of Kepler-78b).
In a rather unique arrangement, a companion study led by Dr. Francesco Pepe (University of Geneva, Switzerland) that used the same Kepler data but independent radial velocity observations is being published in the same issue.
The two studies found very similar results. “The gold standard in science is having your findings reproduced by other researchers,” explained Howard. “In this case, we did not have to wait for this to happen.”
The other members of Howard’s team are Roberto Sanchis-Ojeda (MIT), who analyzed the transit data taken by the Kepler spacecraft to find the planet and calculate its size, Dr. Geoffrey Marcy (University of California, Berkeley), Dr. John Johnson (Harvard), Dr. Debra Fischer (Yale), Benjamin Fulton and Evan Sinukoff (UHM graduate students), and Dr. Jonathan Fortney (University of California, Santa Cruz).
. 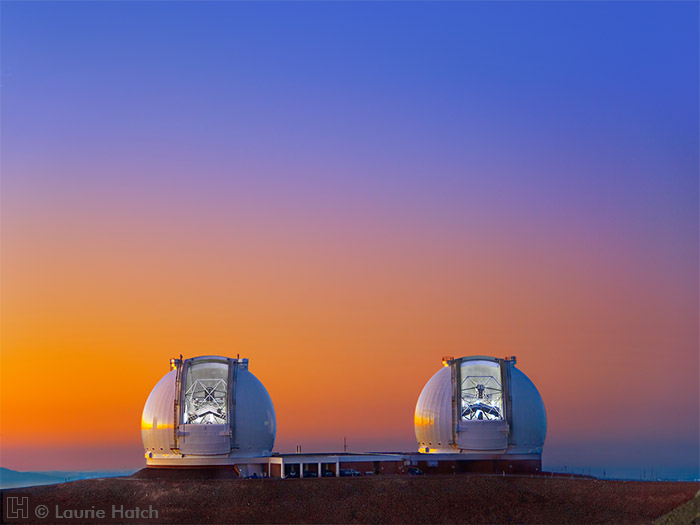 Kepler-78b is a planet that shouldn't exist. This scorching lava world circles its star every eight and a half hours at a distance of less than one million miles - one of the tightest known orbits. According to current theories of planet formation, it couldn't have formed so close to its star, nor could it have moved there.
"This planet is a complete mystery," says astronomer David Latham of the Harvard-Smithsonian Center for Astrophysics (CfA). "We don't know how it formed or how it got to where it is today. What we do know is that it's not going to last forever."
"Kepler-78b is going to end up in the star very soon, astronomically speaking," agrees CfA astronomer Dimitar Sasselov.
Not only is Kepler-78b a mystery world, it is the first known Earth-sized planet with an Earth-like density. Kepler-78b is about 20 percent larger than the Earth, with a diameter of 9,200 miles, and weighs almost twice as much. As a result it has a density similar to Earth's, which suggests an Earth-like composition of iron and rock.
The tight orbit of Kepler-78b poses a challenge to theorists. When this planetary system was forming, the young star was larger than it is now. As a result, the current orbit of Kepler-78b would have been inside the swollen star.
"It couldn't have formed in place because you can't form a planet inside a star. It couldn't have formed further out and migrated inward, because it would have migrated all the way into the star. This planet is an enigma," explains Sasselov.
According to Latham, Kepler-78b is a member of a new class of planets recently identified in data from NASA's Kepler spacecraft. These newfound worlds all orbit their stars with periods of less than 12 hours. They're also small, about the size of Earth. Kepler-78b is the first planet in the new class to have its mass measured.
"Kepler-78b is the poster child for this new class of planets," notes Latham.
The team studied Kepler-78b using a newly commissioned, high-precision spectrograph known as HARPS-North, at the Roque de los Muchachos Observatory on La Palma. They coordinated their work with a second, independent team using the HIRES spectrograph at the Keck Observatory. The teams' measurements agreed with each other, increasing their confidence in the result.
Kepler-78b is a doomed world. Gravitational tides will draw it even closer to its star. Eventually it will move so close that the star's gravity will rip the world apart. Theorists predict that Kepler-78b will vanish within three billion years.
Interestingly, our solar system could have held a planet like Kepler-78b. If it had, the planet would have been destroyed long ago leaving no signs for astronomers today.
Kepler-78b orbits a Sun-like G-type star located 400 light-years from Earth in the constellation Cygnus.
Headquartered in Cambridge, Mass., the Harvard-Smithsonian Center for Astrophysics (CfA) is a joint collaboration between the Smithsonian Astrophysical Observatory and the Harvard College Observatory. CfA scientists, organized into six research divisions, study the origin, evolution and ultimate fate of the universe.
Quelle: Harvard-Smithsonian Center for Astrophysics
Kepler-78b
« Zum vorherigen Eintrag Zum nächsten Eintrag »
4519 Views
Created with page4