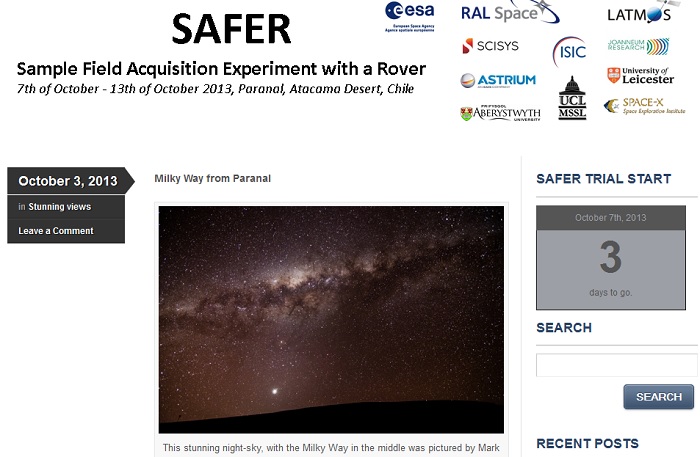 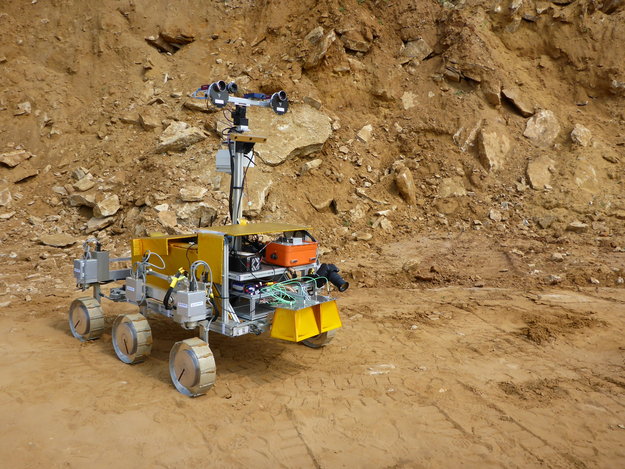 An early ground prototype of ESA’s six-wheeled ExoMars rover vehicle, nicknamed ‘Bridget’, was used for the SAFER (Sample Acquisition Field Experiment with a Rover) field test in Chile’s Atacama desert during October 2013. This photo was taken during a preliminary run in Upwood Quarry near Abingdon in Oxfordshire, UK, in July 2013. 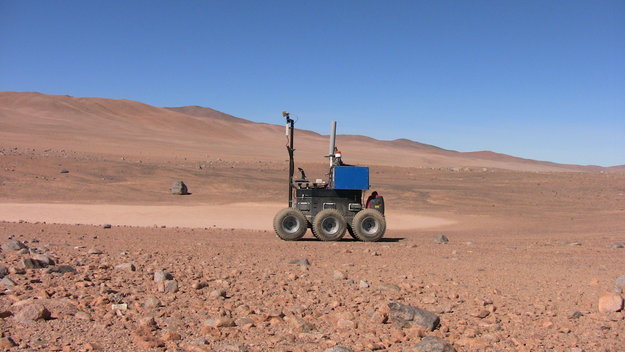 ESA's Seeker rover during its May 2012 test campaign in Chile's Atacama Desert, coasting along one of the rare flat loam deposits. The autonomous rover was built and tested through ESA's StarTiger programme, gathering together a specialised team working in a fixed timescale to achieve technology breakthroughs. The ROBOVOLC platform, which served as the basis for the locomotion system, was not specifically designed for Mars-like conditions, nevertheless it proved very trustworthy.

Next week will see ESA’s most ambitious planetary rover test yet. Robotic exploration of a Mars-like desert in South America will be overseen from the UK, providing experience for future missions to the Red Planet.

The rover faces the desolate Atacama Desert in northern Chile, one of the closest terrestrial matches for Mars. Among the driest places on Earth, it lacks any vegetation and its red–brown soil and rocks make it look even more like Mars.

The aim is to build up experience in operating rovers on a planet, which requires a very different way of working from a satellite mission.

For added pressure on the rover’s remote overseers – based at the Satellite Applications Catapult facility in Harwell, UK, next to ESA’s European Centre for Space Applications and Telecommunications – each day of the five-day  test will be treated as equivalent to two Mars days, or ‘sols’.

For each sol they will first downlink data then prepare a set of commands for the next sol that the rover will then carry out on its own.

The trial is intended to develop technologies and expertise for future Mars missions in general, but for added realism it is using ESA’s 2018 ExoMars rover as its ‘reference mission’.

An early prototype of the six-wheeled ExoMars rover will be put through its paces, fitted with prototypes of three of its scientific instruments: a panoramic camera for stereo 3D imaging, a ground-penetrating radar to probe subsurface geology, and a close-up imager for studying subsurface samples to a resolution of a thousandth of a millimetre.

These three instruments will work together to select a sample site with outcrops of bedrock beside looser material. A human-operated hand drill will gather underground samples for the rover to examine – although this human intervention will remain invisible to the remote operators.

“This field trial is about optimising the use of typical instruments and equipment aboard a Mars rover and generating a set of commands for the rover to execute the following day,” explains Michel van Winnendael, overseeing the Sample Acquisition Field Experiment with a Rover, or SAFER, project for ESA.

“Unlike satellites, planetary rovers operate in close interaction with the topography and physical properties of the planetary surface.

“This implies limited data return from the rover during relatively short communication windows, with an inherent time delay.”

Jorge Vago, ExoMars project scientist, adds, “For the first time with SAFER we will attempt to integrate data from surface and subsurface instruments to explore how to transition from topsoil to underground operations.”

“Since drilling plays an important role in the ExoMars rover’s search-for-life strategy, this is an important step. On Mars the best chances of accessing well-preserved molecular biosignatures deposited during the planet’s early, water-rich history lie in the subsurface, at depths below 1 m, where the topsoil provides shielding from cosmic radiation damage.”

The precise test location will be chosen on Sunday 6 October, based on information from local reconnaissance trips made this week by part of the team. Images of the site taken from an unmanned aerial vehicle to simulate the overview from a Mars orbiter will be sent to the remote operators.

“Since this is a rehearsal of a planetary exploration scenario there is an inevitable degree of uncertainty in the sequence of events,” adds Michel.

“Nature is very inventive in presenting situations which were not fully anticipated by those who conceived the mission. That’s why we find it important to do field tests in a fairly representative environment.”

The industrial team performing the testing for ESA is led by the UK Science & Technology Facilities Council’s RAL Space at the Rutherford Appleton Laboratory, with subcontractors including Astrium, Aberystwyth University, Joanneum Research in Austria, Space Exploration Institute in Switzerland and SCISYS, with additional support from the Mullard Space Science Laboratory of University College London, the University of Leicester and the LATMOS research lab of the Centre National de la Recherche Scientifique, France.

The SAFER team in Chile will be accommodated beside the Very Large Telescope on nearby Mount Paranal, as guests of the European Southern Observatory. 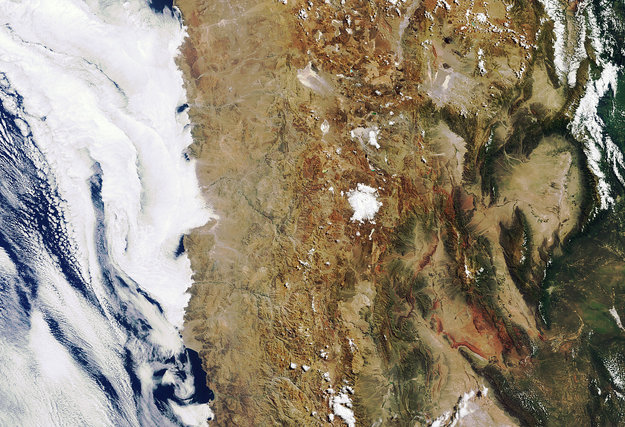 The southern Atacama Desert is pictured in this Envisat image, with the border of Chile (west) and Argentina (east) running down the middle. The Atacama is believed to be the driest desert in the world, and the lack of cloud cover in this image highlights the dry climate. 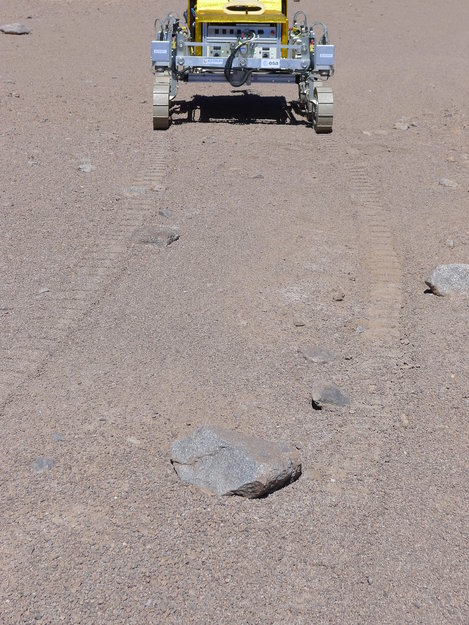 ESA’s test rover has been fitted with scientific instruments  and made its first tracks in the sands of Chile’s Atacama Desert. Meanwhile, team members have explored the area to select a suitable site for testing, flying a drone to produce an aerial map.
.
This week’s Sample Acquisition Field Experiment with a Rover, or SAFER, field trial is gaining experience in remotely operating a Mars rover prototype equipped with scientific instruments.
.
ESA has assembled an international industrial team for the trial, which takes place in the Mars-like Atacama, one of the driest places on Earth.
“During the past few days we have been busy preparing for the actual trial,” explains Michel van Winnendael, overseeing the testing for ESA. “A number of sites have been visited, based on guidance provided by Chilean geologist Prof. Guillermo Chong.
.
“Our team geologist Derek Pullan of the University of Leicester has been exploring the area looking for similar sites to the kind of martian locations we would employ the same instruments on. The local team settled on a consensus choice – which we have christened ‘SAFER Valley’.
“Then on Sunday night a digital elevation map, acquired in the field by an overflying drone to simulate orbital imagery of the rover’s surroundings, was sent to the Remote Control Centre at the Satellite Applications Catapult facility in Harwell, UK.”
.
The scientific instruments used in the trial are designed to help search for the best location to drill down to collect subsurface samples on Mars. Sheltered from surface radiation and harsh oxidising chemicals, such samples may contain signs of past or present life.
.
ESA’s 2018 ExoMars mission is acting as the ‘reference mission’ for the trial. The rover vehicle used for the trial, called ‘Bridget’, is provided by Astrium Stevenage in the UK.
On Tuesday morning a trio of prototype ExoMars rover instruments was fitted to Bridget. The panoramic camera provides stereo 3D terrain imagery, the close-up camera works like a geologist’s hand-lens for high-resolution imaging, and the radar peers through soil for a detailed 3D view of the shallow subsurface beneath the rover.
On Monday evening, before the rover had been deployed in the field, panoramic images were sent to the control centre. Looking at them along with a digital elevation map, the remote control team had to make their first decision on the path to be taken by the rover the following day.
“The next morning, once the instruments were installed, this route was uploaded to the rover,” adds Michel. “It then began its first exploration, with some debugging and manual interventions needed along the way.
.
“Nevertheless, after a long working day that lasted until sunset, the data collected by the instruments were sent back to the control centre.”
. 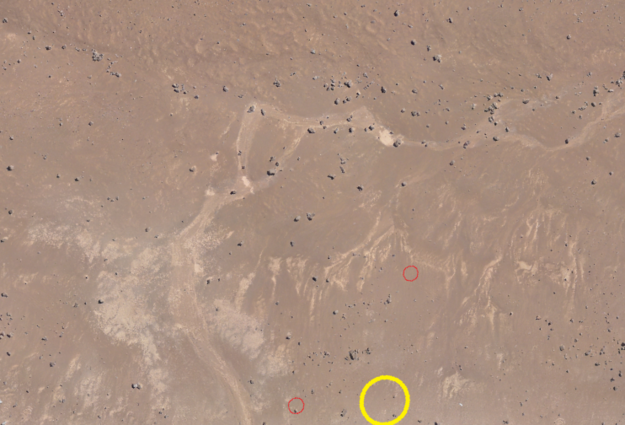 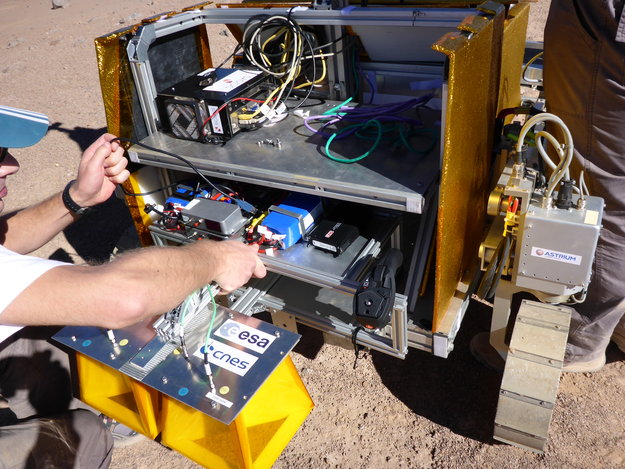 Rover fitted with science instruments
.
Treacherous rocks
.
For some things you need to be out in the field. The following event probably wouldn’t have happened in a lab environment. A flat rock which was easily traversable by Bridget suddenly flipped when Bridget’s wheel went over it close to one side. This greatly increased the height of the rock. Luckily Bridget had enough ground clearance to safely proceed but this scenario is definitely something to think about when driving over similar rock on Mars. 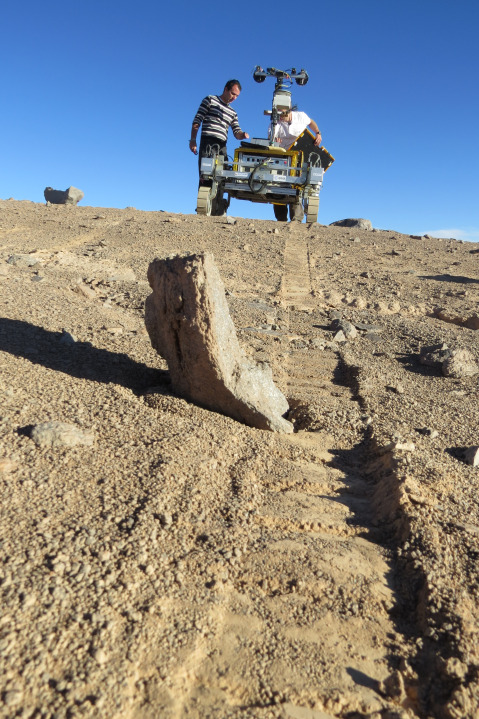 This rock initially had a low profile and was identified as one safe to go over
credit: Elie Allouis ‎(Astrium)
.
Quelle: ESA 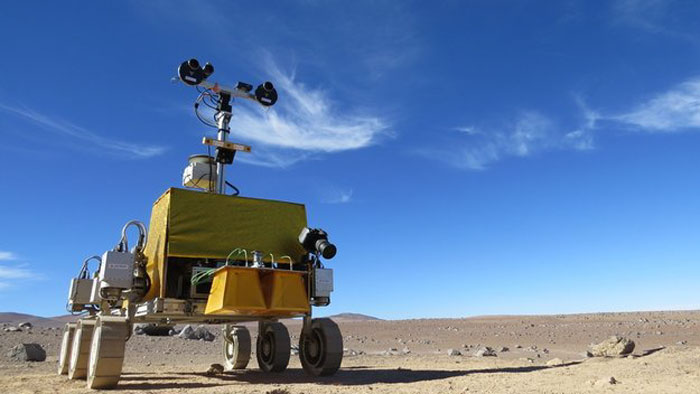 Braving high winds, dust devils and unpredictable terrain, ESA’s test rover has completed its exploration across – and under – Chile’s Mars-like Atacama Desert.
The five-day Sample Acquisition Field Experiment with a Rover, or SAFER, field trial concluded on Saturday 12 October.
An early version of ESA’s 2018 ExoMars rover fitted with a trio of prototype ExoMars instruments was overseen from a remote control centre at the Satellite Applications Catapult facility in Harwell, UK.
The controllers sat in front of a large video wall, combining data from the rover’s instruments with their own 3D planning maps.
Over the course of six simulated martian days, they reviewed rover data to select new targets or trajectories for subsequent investigation.
“SAFER’s purpose is really to build up experience in rover field testing, so the remote team worked as realistically as possible,” explains Michel van Winnendael, overseeing the testing for ESA.
. 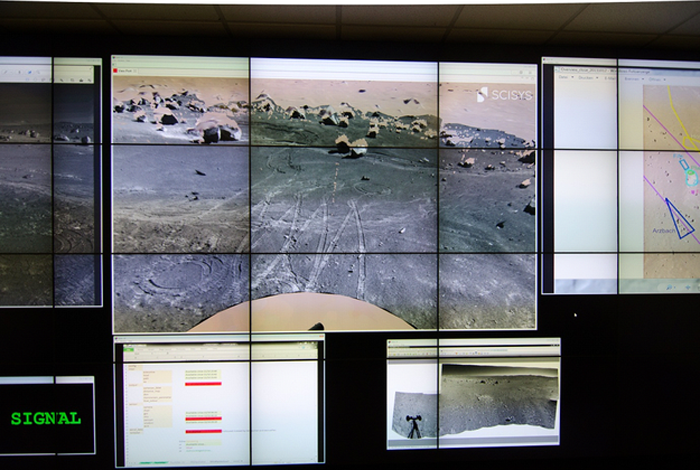 Video wall in control centre
.
“They had to plan good observation points for the instruments and safe paths for navigation. Once a plan was prepared it was dispatched to the local team in the field who then forwarded it to the rover, while trying to remain as ‘invisible’ as possible for the remote operators.”
This extended to brushing away tyre tracks and their own footprints with a broom, so as not to give the remote control centre any inadvertent positioning clues.
The ExoMars rover was used as the ‘reference mission’ for the trial, helping to maximise the level of realism.
Just as the actual rover will do on Mars, the test rover – supplied by Astrium in Stevenage, UK and dubbed ‘Bridget’ – hosted a panoramic camera, close-up imager resembling a geologist’s lens and ground-penetrating radar to identify promising sites for subsurface excavation.
The one item the rover lacked was a working drill, so whenever the control centre ordered an excavation the local team stepped in to manually dig the site. This obtained samples for ‘ground truth’ – checking that the radar analysis was accurate as well as enabling close-up analysis.
“At our second simulated drill location the field team found a layer of rock starting at a depth of 60 cm,” remarks Sev Gunes-Lasnet, project manager for RAL Space. “This comes close to the kind of features the team was looking for: analogues for locations on Mars which could hold traces of past or present life.”
A valuable element of the field trial was its unpredictability: high desert winds and a close encounter with a dust devil led the local ream to shelter their control centre behind a huddle of cars, although the rover itself was untroubled.
.
Quelle: ESA
« Zum vorherigen Eintrag Zum nächsten Eintrag »
4718 Views
Created with page4