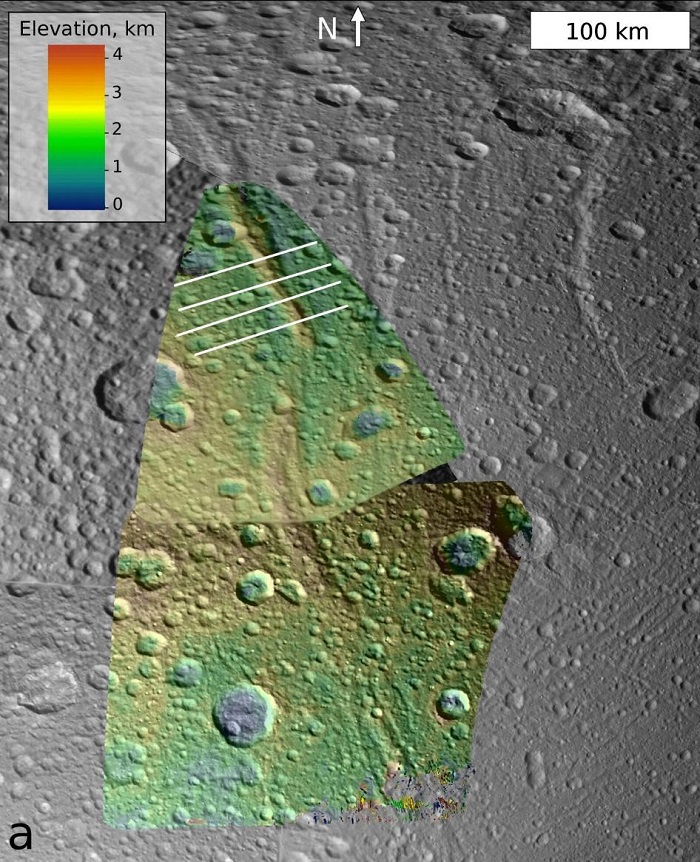 Buckling Under the Weight

This image, which is composed of data obtained by NASA's Cassini spacecraft, shows the topography of a mountain known as Janiculum Dorsa on the Saturnian moon Dione. Color denotes elevation, with red as the highest area and blue as the lowest.

Janiculum Dorsa is a 500-mile-long (800-kilometer-long) mountain and ranges in height from 0.6 to 1.2 miles (1 to 2 kilometers). An analysis of the topography data suggests the crust under the mountain puckers as much as 0.3 mile (0.5 kilometer). This bending of the crust suggests the icy crust was warm at some time in recent history. The best explanation for such behavior is the existence of a subsurface ocean under the mountain when it formed.

The Cassini-Huygens mission is a cooperative project of NASA, the European Space Agency and the Italian Space Agency. The Jet Propulsion Laboratory, a division of the California Institute of Technology in Pasadena, manages the mission for NASA's Science Mission Directorate, Washington, D.C. The Cassini orbiter and its two onboard cameras were designed, developed and assembled at JPL. The imaging operations center is based at the Space Science Institute in Boulder, Colo.