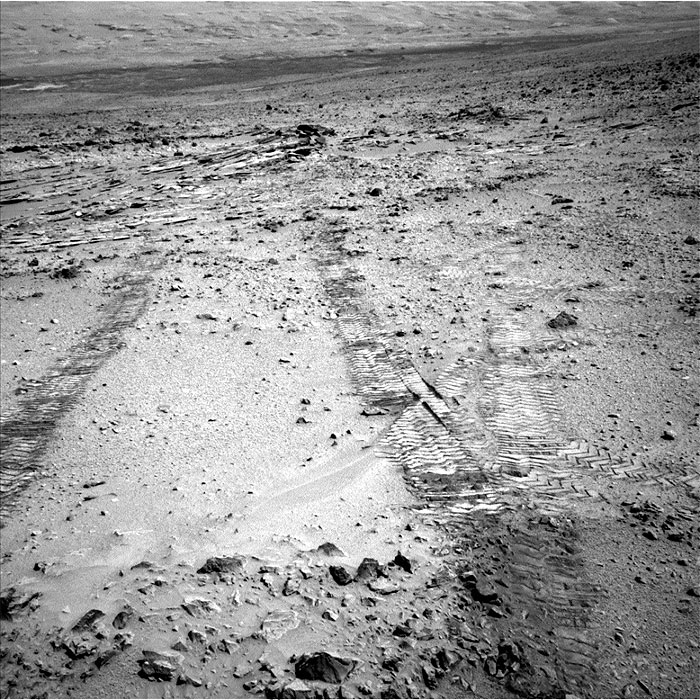 This view from the left Navigation Camera (Navcam) of NASA's Mars Rover Curiosity looks back at wheel tracks made during the first drive away from the last science target in the "Glenelg" area. The drive commenced a long trek toward the mission's long-term destination: Mount Sharp.

First Leg of Long Trek Toward Mount Sharp
This view from the left Navigation Camera (Navcam) of NASA's Mars Rover Curiosity looks back at wheel tracks made during the first drive away from the last science target in the "Glenelg" area. The drive commenced a long trek toward the mission's long-term destination: Mount Sharp.  Curiosity drove 59 feet (18 meters) on the 324th Martian day, or sol, of the rover's work on Mars. It took this image that same sol, looking back toward the target sedimentary outcrop called "Shaler."  Wheel tracks in the right foreground of the image were left by Curiosity's earlier passage through this area on its way toward Glenelg targets seven months earlier.
The trek to the entry point for lower layers of Mount Sharp, about 5 miles (8 kilometers) away, will take many months.  While working at targets near Shaler in the "Glenelg" area during the first half of 2013, Curiosity found evidence of a past Martian environment with conditions favorable for microbial life.  The mission's main destination remains the lower layers of Mount Sharp, where researchers anticipate finding evidence about how the ancient Martian environment changed and evolved.
. 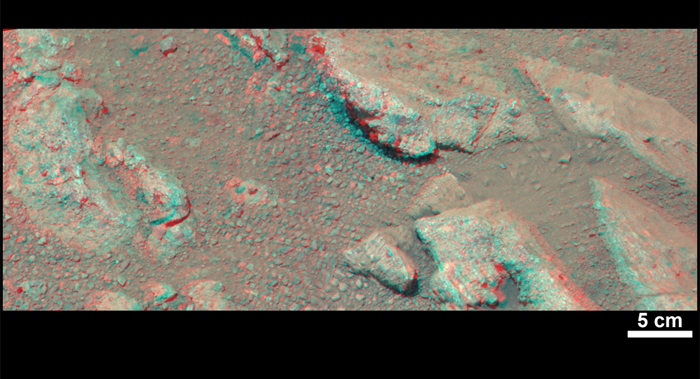 Evidence About a Martian Streambed (Stereo)
This stereo view from NASA's Mars rover Curiosity shows a rock called "Link," which bears rounded pebbles that provide evidence about vigorous flow of water in a stream on ancient Mars. The scene appears three dimensional when viewed through red-blue glasses with the red lens on the left. The scale bar at lower right is 5 centimeters (2 inches).
Link contains rounded gravel fragments, or clasts, up to a couple inches (few centimeters) in size, in a matrix of white material. Many gravel-sized rocks have eroded out of the outcrop onto the surface, particularly in the left portion of the frame. Water transport is the only process capable of producing the rounded shape of clasts of this size.
Curiosity's Mast Camera instrument (Mastcam) acquired component images of this scene on the 27th Martian day, or sol, of the mission (Sept. 2, 2012). The Mastcam has two cameras, a telephoto right eye (Mastcam 100) with a 100-millimeter-focal-length lens, and a moderately wide-angle left eye (Mastcam 34) with a 34-millimeter lens. This stereo image combines images from each eye.
The name Link is derived from a significant rock formation in the Northwest Territories of Canada, where there is also a lake with the same name.
Scientists enhanced the color in this version to show the Martian scene as it would appear under the lighting conditions we have on Earth, which helps in analyzing the terrain. A version closer to the raw color recorded by the camera on Mars (adjusted for stereo effect) is available as Figure 1.
Quelle: NASA
« Zum vorherigen Eintrag Zum nächsten Eintrag »
3934 Views
Created with page4