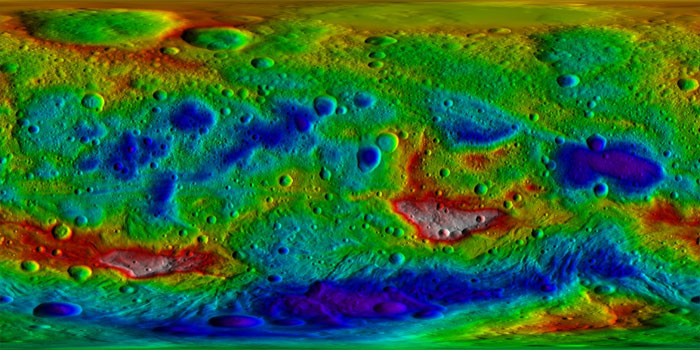 Vesta Topography Map
This color-coded topography map from NASA's Dawn mission shows the giant asteroid Vesta in an equirectangular projection at 32 pixels per degree, relative to an ellipsoid of 177 miles by 177 miles by 142 miles (285 kilometers by 285 kilometers by 229 kilometers). The color scale extends from 13.96 miles (22.47 kilometers) below the surface in purple to 12.11 miles (19.48 kilometers) above the surface in white. The topographic map was constructed from analyzing more than 17,000 images from Dawn's framing camera that were taken with varying sun and viewing angles.
The Dawn mission to Vesta and Ceres is managed by NASA's Jet Propulsion Laboratory, a division of the California Institute of Technology in Pasadena, for NASA's Science Mission Directorate, Washington. The University of California, Los Angeles, is responsible for overall Dawn mission science. The Dawn framing cameras were developed and built under the leadership of the Max Planck Institute for Solar System Research, Katlenburg-Lindau, Germany, with significant contributions by DLR German Aerospace Center, Institute of Planetary Research, Berlin, and in coordination with the Institute of Computer and Communication Network Engineering, Braunschweig. The framing camera project is funded by the Max Planck Society, DLR and NASA.
Quelle: NASA
« Zum vorherigen Eintrag Zum nächsten Eintrag »
4035 Views
Created with page4