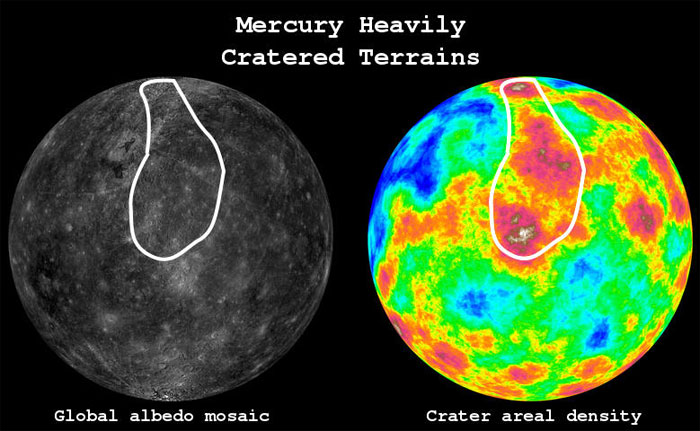 The figure shows an image of Mercury's surface (left; obtained using publicly available mosaic of Mercury from the MESSENGER spacecraft and a color-coded view of the global crater areal density (right), obtained by measuring craters greater than 25 km. The region within the white line corresponds to the heavily cratered terrains analyzed to calculate the age of the oldest surfaces on Mercury. (Credit: Image courtesy of Southwest Research Institute)
.
The surface of Mercury is rather different from those of well-known rocky bodies like the Moon and Mars. Early images from the Mariner 10 spacecraft unveiled a planet covered by smooth plains and cratered plains of unclear origin. A team led by Dr. Simone Marchi, a Fellow of the NASA Lunar Science Institute located at the Southwest Research Institute (SwRI) Boulder, Colo., office, collaborating with the MESSENGER team, including Dr. Clark Chapman of the SwRI Planetary Science Directorate, studied the surface to better understand if the plains were formed by volcanic flows or composed of material ejected from the planet's giant impact basins.
Recent images from NASA's MESSENGER (MErcury Surface, Space ENvironment, GEochemistry, and Ranging) spacecraft provided new insights showing that at least the younger plains resulted from vigorous volcanic activity. Yet scientists were unable to establish limits on how far into the past this volcanic activity may have occurred, or how much of the planet's surface may have been resurfaced by very old volcanic plains.
Now, a team of scientists has concluded that the oldest visible terrains on Mercury have an age of 4 billion to 4.1 billion years, and that the first 400 to 500 million years of the planet's evolution are not recorded on its surface. To reach its conclusion, the team measured the sizes and numbers of craters on the most heavily cratered terrains using images obtained by the MESSENGER spacecraft during its first year in orbit around Mercury. Team members then extrapolated to Mercury a model that was originally developed for comparing the Moon's crater distribution to a chronology based on the ages of rock samples gathered during the Apollo missions.
"By comparing the measured craters to the number and spatial distribution of large impact basins on Mercury, we found that they started to accumulate at about the same time, suggesting that the resetting of Mercury's surface was global and likely due to volcanism," said lead author Dr. Simone Marchi, who has a joint appointment between two of NASA's Lunar Science Institutes, one at the SwRI in Boulder and another at the Lunar and Planetary Institute in Houston.
Those results set the age boundary for the oldest terrains on Mercury to be contemporary with the so-called Late Heavy Bombardment (LHB), a period of intense asteroid and comet impacts recorded in lunar and asteroidal rocks and by the numerous craters on the Moon, Earth, and Mars, as well as Mercury.
"Meanwhile, the age of the youngest and broadest volcanic provinces visible on Mercury was determined to be about 3.6 billion to 3.8 billion years ago, just after the end of the Late Heavy Bombardment," Marchi said.
Altogether, the results indicate that the time agreement between the onset of the LHB and the global resurfacing of Mercury implies not only that the resurfacing was due to volcanism, but also, according to Chapman, that "the impact of large projectiles hitting Mercury's thin solid crust during the LHB may have enhanced the observed global resurfacing."
Quelle: Southwest Research Institute
« Zum vorherigen Eintrag Zum nächsten Eintrag »
4110 Views
Created with page4