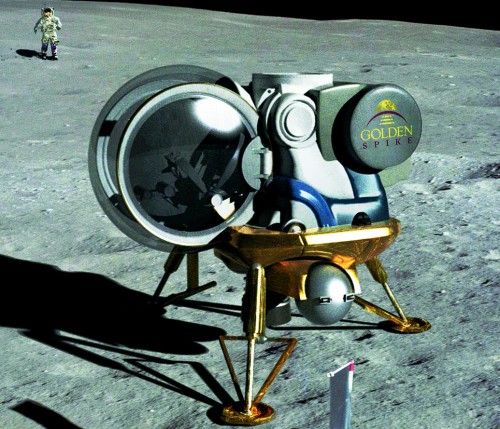 More than four decades since its last human-piloted craft touched down on the Moon, Northrop Grumman has concluded a feasibility study of a new commercial landing vehicle for the Golden Spike Company. It includes a novel, low-mass ascent stage concept, dubbed “Pumpkin”, and centers on the need to be packaged within a 5-meter payload fairing envelope, as well as offering insights into the kind of propellants necessary to accomplish Golden Spike’s goal of bootprints on the lunar surface by 2020.

Unveiled to the world last December, after several months of excited speculation, Golden Spike was founded by Alan Stern, associate administrator for NASA’s Science Mission Directorate in 2007-2008 and principal investigator for the agency’s New Horizons voyage to Pluto, and includes former Apollo flight director Gerry Griffin as chair of the board. It seeks to develop a capability to send astronauts from U.S. and foreign space agencies, corporations, governments and even private individuals on two-person expeditions to the Moon, at a cost of $1.5 billion. Within weeks, in January 2013, Golden Spike announced that it had contracted with Northrop Grumman to begin lunar lander design studies.

It was a notable move, for the Falls Church, Va.-based aerospace and defense contractor is the only organization in the world to have successfully developed and flown a piloted craft to the surface of the Moon. Its Apollo lunar module ferried six pairs of astronauts to the dusty surface of our closest celestial neighbor between July 1969 and December 1972. The four-month study for Golden Spike, announced earlier this week, included a novel, low-mass ascent stage concept – dubbed “Pumpkin” – and was designed around the need to fit within a 5-meter-diameter payload fairing envelope. It also revealed “many more options for all cryogenic propellants, compared with storable propellants”, but noted that whilst cryogens have higher performance, they are “more difficult to contain for the mission durations intended by Golden Spike”. 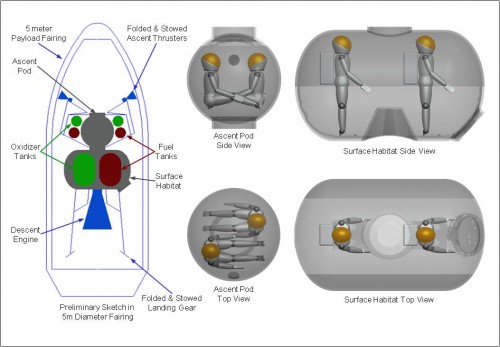 This Northrop Grumman figure shows a preliminary sketch of the minimalist ascent pod with surface habitat concept packaged in a 5-meter payload fairing. The pressurized compartments and propellant tanks easily fit in the available space. Ascent thrusters are mounted on outriggers that are folded up to fit in the payload fairing and the landing gear is folded inward. Also shown are initial side and top views of the ascent pod “Pumpkin” and the surface habitat with crew members in pressure suits. Image Credit: Northrop Grumman

“This concept has significant operability advantages for surface exploration, since the surface habitat can be segmented to isolate lunar dust and provides more space for living and for selecting the most valuable lunar return samples,” said Martin McLaughlin, Northrop Grumman’s study lead. “We affectionately call the minimalist ascent pod “Pumpkin”, because of its spherical shape and because it returns the crew to orbit after the surface-exploration party.” Golden Spike President and CEO Alan Stern noted that Northrop Grumman’s results were “very exciting and will help enable a new wave of human lunar exploration that Golden Spike plans”.

Yet the aspirations of this start-up company remain a source of excitement and scepticism, particularly since one of its earliest moves was to initiate a crowd-sourcing campaign and raise monies to the value of $240,000 – or one dollar for each mile in the journey to the Moon. Praised by some as a shrewd move to kick-start this audacious venture, it was criticized by others as an indicator that Golden Spike is already struggling to build its early financial base.

However, a perusal of Golden Spike’s website makes it difficult not to see a trace of the frustration felt by many space enthusiasts, engineers and visionaries over government reluctance to commit the dollars and political will to return humans to our closest celestial neighbor in over four decades. Mount a Lunar Expedition with Us…It’s the 21st Century, the website proclaims, but such pledges will remain hollow if insufficient markets exist to support Golden Spike’s plans. The company believes that upwards of 15-20 countries, foreign space agencies, corporations, and private individuals would be willing to sign up to two-person lunar surface missions for exploration or adventure between 2020-2030. Costs are expected to be kept down by utilizing current launch vehicles and hardware built by U.S. companies, leaving Golden Spike with the task of constructing the lunar lander, surface experiments, and the suits required for lengthy stays on the surface. By avoiding the desire to design everything from scratch, the company expects to run its operation through what it describes as a “maximally pragmatic” strategy.

Named in honor of the original Golden Spike, driven by Leland Stanford at Promontory Summit, Utah, in May 1869, to join the rails of the First Transcontinental Railroad across the United States, the company provoked a flurry of comment, even in the months preceding its formal announcement of plans at the National Press Club on 6 December last year. Speculation of a “privately circulated proposal” had been highlighted by Florida Today as early as May 2012, following a conference in Hawaii, which noted that one of Golden Spike’s fundamental goals was the establishment of “a reliable Cislunar Superhighway.” Scientific American, writing about the company in early June, described its goal with a single word: “Audacious.”

At present, the Obama administration and NASA have formally distanced themselves from a human return to the lunar surface. The first piloted voyage of the Orion spacecraft – known as “Exploration Mission-2” (EM-2) – was until recently slated to perform an Apollo 8-type circumlunar jaunt, but has now been retasked to support NASA’s ambitious asteroid-capture mission. Launch is officially targeted for late 2021. Further downstream are a series of nebulous “Design Reference Missions,” whose objectives vary from the emplacement of an Exploration Gateway at one of the two Earth-Moon Libration (EML) points to low lunar orbit and surface expeditions. None of these goals are realistically expected until the mid-2020s at the earliest.

Although Golden Spike at present seems to have a relatively modest financial backing, its strategy for what it describes as “monetizing these expeditions” is very much based on the anticipated consumer demand for lunar surface access. This includes not only the sales of the expeditions themselves, but also public participation and membership, media rights, advertising and brand licensing, mission naming rights and merchandising, sale of flown items and returned lunar samples, and the release of related entertainment products.

The total cost of the effort to plant the first boots on the Moon in almost 50 years is anticipated to be around $7-8 billion, and although Golden Spike has yet to settle on a launch vehicle of choice, the website NASASpaceflight.com noted that SpaceX’s Falcon Heavy and United Launch Alliance’s Atlas V may be strong contenders. Certainly, ULA was one of the nine partners listed by Golden Spike at their 6 December unveiling conference.

“Our vision,” explained Griffin last December, “is to create a reliable and affordable U.S.-based commercial human lunar transportation system that enables the exploration of the Moon by humans from virtually any nation, corporation, or individual wishing to accomplish objectives on the Moon—including activities based around science, around business, around national prestige, and personal accomplishment.”

Golden Spike’s website is currently sparse in terms of detail, other than a handful of videos and infographics, but it appears that the company aims to stage as many as three unmanned test flights to the lunar surface, possibly as early as 2017, before the first piloted landing. Each mission will feature a two-launch architecture—the first pre-positioning the lander in lunar orbit and the second despatching a two-member crew to meet it. Destinations were described by Alan Stern as “customer-driven,” which lends credence to the suggestion that Golden Spike may cater to organizations keen to exploit the Moon’s mineralogical wealth, as well as for science.