Astronomers have detected and confirmed over 700 planets orbiting distant stars. Called ‘exoplanets,’ these planets have been given technical names such as “HD 222582 b” by astronomers, but not memorable human-friendly names, like the constellations or comets have. Via the Adopt-a-Planet campaign, Uwingu, working with the public, plans to create names for many or even all of these fascinating, distant worlds.

In Uwingu’s Adopt-a-Planet campaign, any nominated name that reaches 1,000 votes will qualify its namer to adopt the exoplanet of their choice with that name. Winners can choose which planet they would like to name from exoplanet lists created by astronomers.

Adopted planets and the planet’s name’s originator will be publicized by Uwingu. Additionally, the namer will receive $100 in Uwingu store credits, an adoption certificate, and links to in-depth information about their adopted planet. The first 10 names to reach adoption status will receive $500 in Uwingu naming/voting credits as a bonus.

Uwingu will also give recognition to names that reach thresholds of 100 and 500 votes as they climb toward adoption eligibility.

“This is a great way for the worldwide public to connect to the sky and space!” said Uwingu CEO and astronomer Dr. Alan Stern. Stern continued, “In our Adopt-a-Planet campaign every person who nominates a planet can win, and at their own pace, knowing they are funding space research and education along the way.”

Uwingu’s current “baby book” of names is growing daily, with over 1,240 names submitted to date. 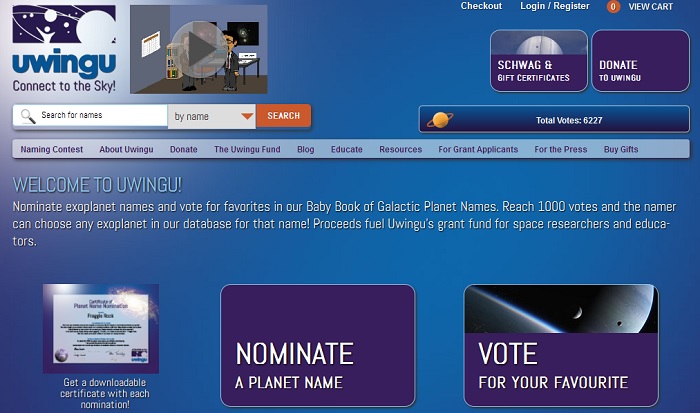