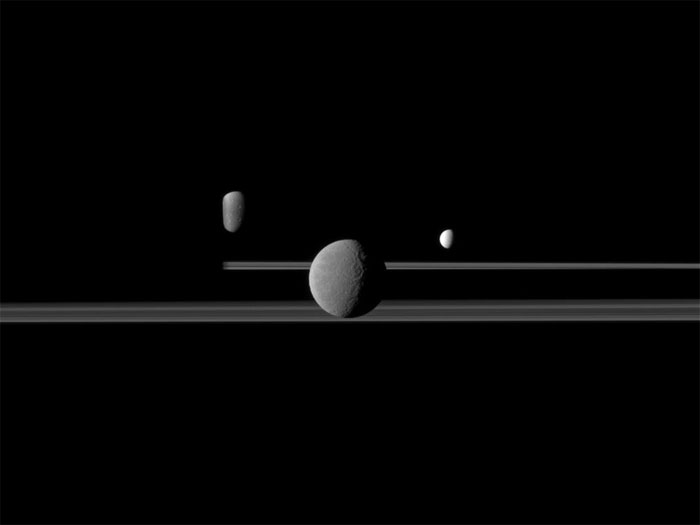 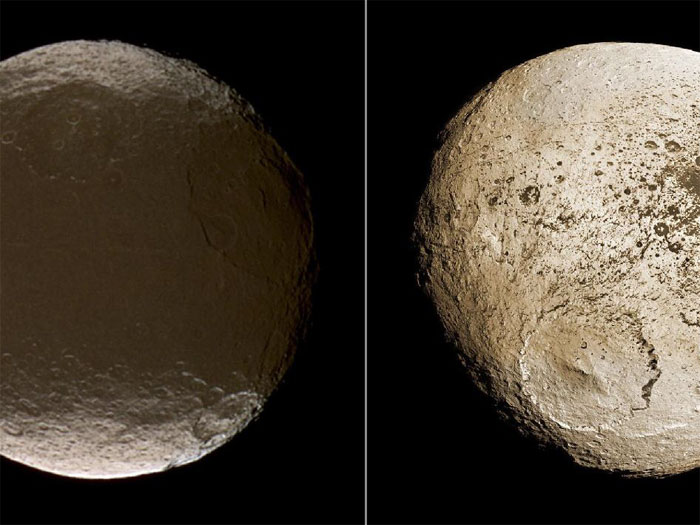 Global View of Iapetus' Dichotomy
These two global images of Iapetus show the extreme brightness dichotomy on the surface of this peculiar Saturnian moon. The left-hand panel shows the moon's leading hemisphere and the right-hand panel shows the moon's trailing side. While low and mid latitudes of the leading side exhibit a surface almost as dark as charcoal, broad tracts of the trailing side are almost as bright as snow. The dark terrain covers about 40 percent of the surface and is named Cassini Regio. The names of the bright terrain are Roncevaux Terra (north) and Saragossa Terra (south).
On both hemispheres, the dominant landforms are impact craters. The largest known well-preserved basin on Iapetus, called Turgis, has a diameter of about 580 kilometers (360 miles). It lies at 17 degrees north latitude, 28 degrees west longitude at the eastern edge of the dark Cassini Regio and is visible on the right side of the left-hand panel. The prominent basin on the southern trailing side (at the lower left of the right-hand panel) is Engelier. Engelier is located at 41 degrees south latitude, 265 degrees west longitude, and has a diameter of about 504 kilometers (313 miles). Its formation destroyed about half of Gerin, another large basin on Iapetus. Gerin is located at 46 degrees south latitude, 233 degrees west longitude, and has a diameter of about 445 kilometers (276 miles). Tortelosa Montes, a part of the giant equatorial ridge that was discovered in Cassini images on December 25, 2004, is visible in the left panel as a thin line within Cassini Regio, and as a tall prominence at the western limb. It continues onto the trailing side (right side of right panel), where the bright western flanks of the Carcassone Montes appear as dominant bright spots within the western edge of Cassini Regio.
The cause of the extreme brightness dichotomy on Iapetus is likely to be thermal segregation of water ice on a global scale. Thermal effects are usually expected to act latitudinally. That is, polar areas are colder than equatorial terrain in most cases due to the more oblique angle of the solar irradiation. Therefore, an additional process is required to explain the longitudinal difference as well. In one model, dark, reddish dust coming in from space and preferentially deposited on the leading side forms a small, but crucial difference between the leading and trailing hemispheres, which is sufficient to allow the thermal effect to evaporate the water ice on the leading side completely, but only marginally on the trailing side. See Color Dichotomy on Iapetus to learn more. Iapetus' extremely slow rotation rate (1,904 hours), its distance from the sun, its relatively small size and surface gravity, and its outer position within the regular satellite system of Saturn are also crucial contributing conditions for this mechanism to work as observed.
North on Iapetus is approximately up in the images. Iapetus has a diameter of 1471 kilometers (914 miles).
The right-hand panel, released previously as The Other Side of Iapetus, shows a mosaic of 60 different images, obtained on September 10, 2007.
The left-hand panel is a color composite of three images obtained through infrared, green and ultraviolet spectral filters (centered at 752, 568 and 338 nanometers, respectively) by Cassini's narrow-angle camera on Dec. 27, 2004. The view was acquired at a distance of approximately 717,000 kilometers (446,000 miles) from Iapetus and at a sun-Iapetus-spacecraft, or phase, angle of 22 degrees.
Scale in the original image on the left was about 4 kilometers (2.5 miles) per pixel. For ease of comparison, the scales in both the left and right images were set to 1,400 meters (4,600 feet) per pixel.
The Cassini-Huygens mission is a cooperative project of NASA, the European Space Agency and the Italian Space Agency. The Jet Propulsion Laboratory, a division of the California Institute of Technology in Pasadena, manages the mission for NASA's Science Mission Directorate, Washington, D.C. The Cassini orbiter and its two onboard cameras were designed, developed and assembled at JPL. The imaging operations center is based at the Space Science Institute in Boulder, Colo.
. 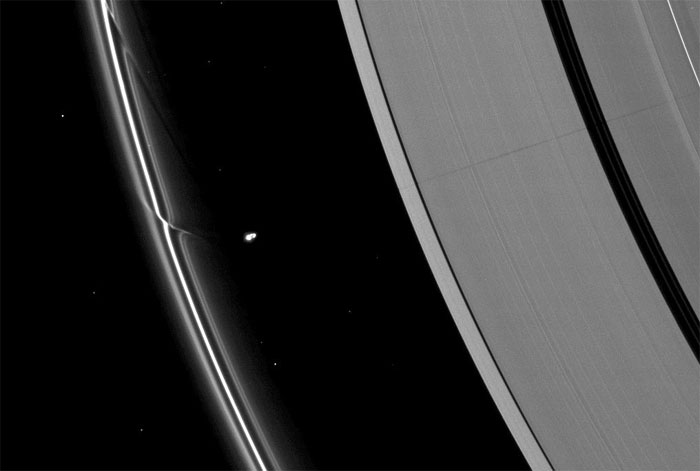 The effects of the small moon Prometheus loom large on two of Saturn's rings in this image taken a short time before Saturn's August 2009 equinox.
A long, thin shadow cast by the moon stretches across the A ring on the right. The gravity of potato-shaped Prometheus (86 kilometers, or 53 miles across) periodically creates streamer-channels in the F ring, and the moon's handiwork can seen be on the left of the image.
The novel illumination geometry that accompanies equinox lowers the sun's angle to the ringplane, significantly darkens the rings, and causes out-of-plane structures to look anomalously bright and cast shadows across the rings. These scenes are possible only during the few months before and after Saturn's equinox, which occurs only once in about 15 Earth years. Before and after equinox, Cassini's cameras have spotted not only the predictable shadows of some of Saturn's moons, but also the shadows of newly revealed vertical structures in the rings themselves.
Prometheus is overexposed in this image. Bright specks in the image are background stars.
This view looks toward the northern, unilluminated side of the rings from about 28 degrees above the ringplane.
The image was taken in visible light with the Cassini spacecraft narrow-angle camera on July 30, 2009. The view was acquired at a distance of approximately 1.8 million kilometers (1.1 million miles) from Saturn and at a Sun-Saturn-spacecraft, or phase, angle of 97 degrees. Image scale is 10 kilometers (6 miles) per pixel.
.
Quelle: NASA
« Zum vorherigen Eintrag Zum nächsten Eintrag »
4203 Views
Created with page4