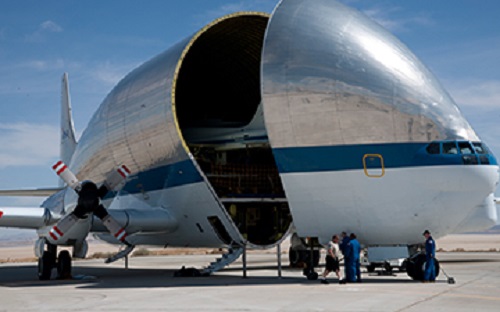 The SGT Super Guppy-Turbine, the last of its kind still flying, measures more than 48 feet to the top of its tail and has a wingspan of more than 156 feet with a huge upper cargo bay and a hinged nose that opens 110 degrees. 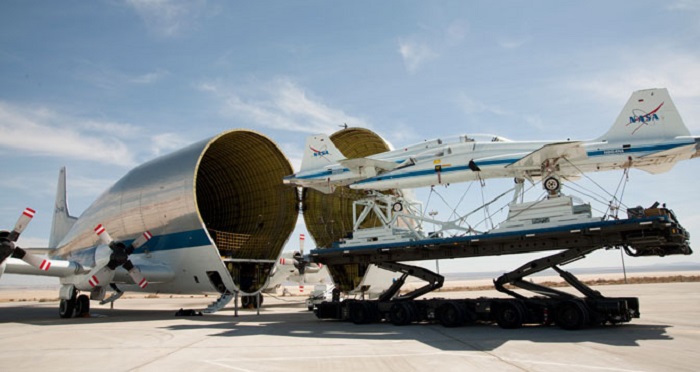 Two retired NASA T-38 trainers mounted on a transport pallet atop a mobile transporter are positioned for loading aboard NASA's Super Guppy prior to ferrying them to El Paso, Texas, for disassembly.

The SGT Super Guppy-Turbine, the last of its kind still flying, is based at Ellington Airport in Houston, near NASA's Johnson Space Center. The aircraft was at Dryden to transport the two T-38s that Dryden hasn't flown in several years and are no longer airworthy to El Paso, Texas, where they will be cannibalized for parts to keep other Johnson-operated T-38s in El Paso flying. After removing the wings and other usable components, the remaining portions of the airframes will be trucked to the Air Force's Aerospace Maintenance and Recovery Center adjacent to Davis-Monthan Air Force Base near Tucson, Ariz., for final disposition. 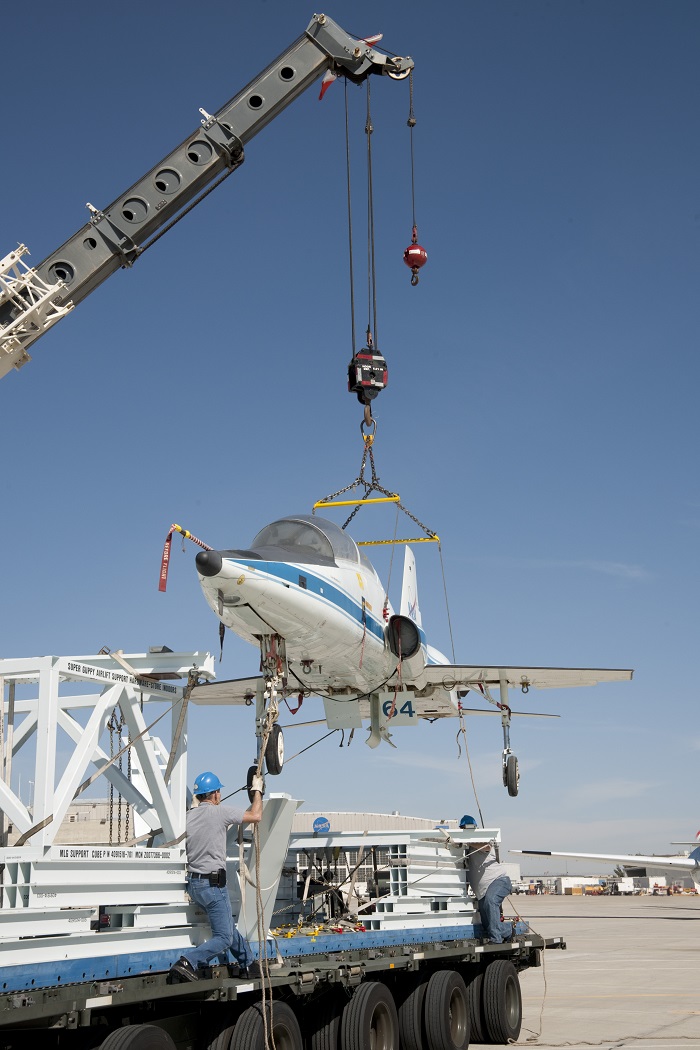 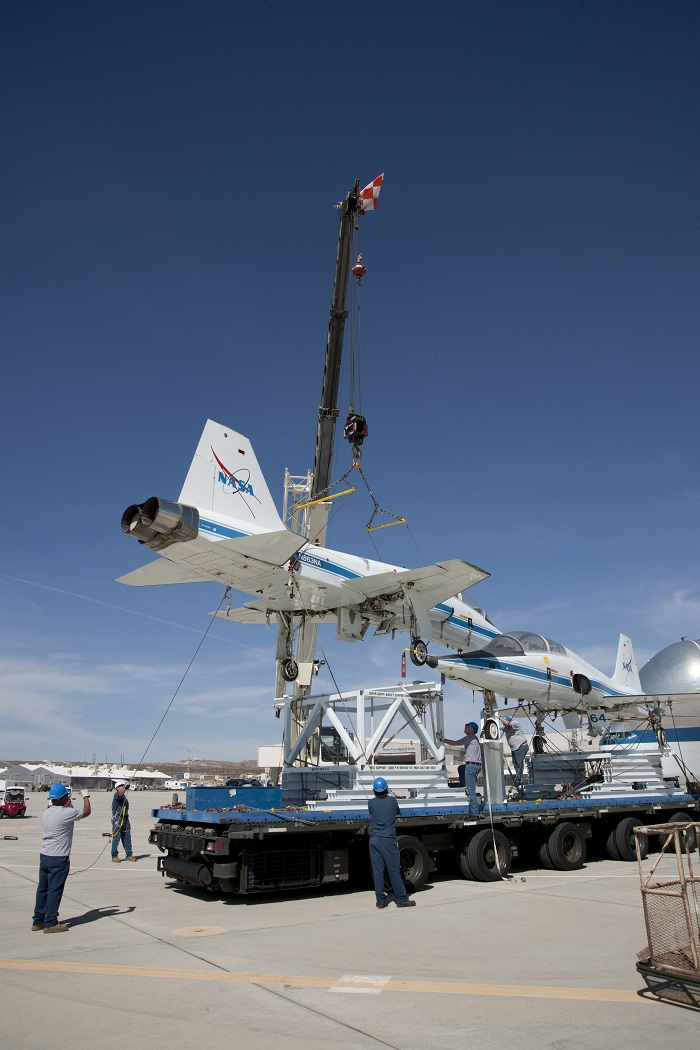 The second retired T-38 joins its companion on the special transport pallet.

Aside from the Super Guppy's size – it measures more than 48 feet to the top of its tail and has a wingspan of more than 156 feet with a huge upper cargo bay – the aircraft features a hinged nose that opens 110 degrees. Once open, an aircraft cargo loader was used to load the two trainer aircraft. The Guppy's 25-foot diameter cargo bay permitted the two T-38 aircraft to be moved with only the wingtips needing to be removed, said Johnson flight engineer David Elliott, the Guppy's project manager.

After opening the nose section of the Guppy, hoisting the T-38s onto a specially designed pallet atop a mobile transporter, loading the pallet and T-38s onto the Guppy and then reclosing the Guppy's nose section – about a 2.5-hour process – the Guppy departed for El Paso. 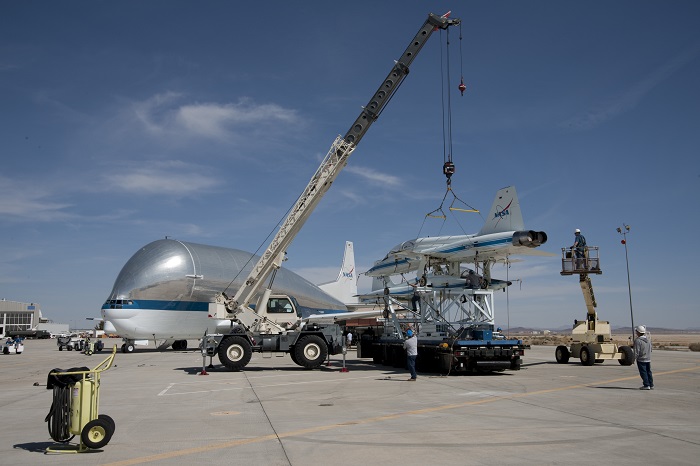 As the Super Guppy awaits its cargo in the background, workmen secure the second T-38 to its transport pallet. 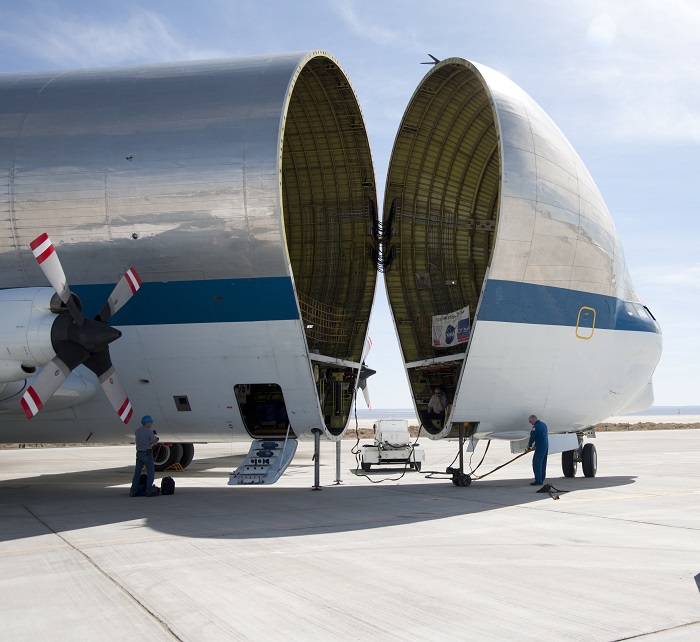 The Guppy opens its "mouth…" 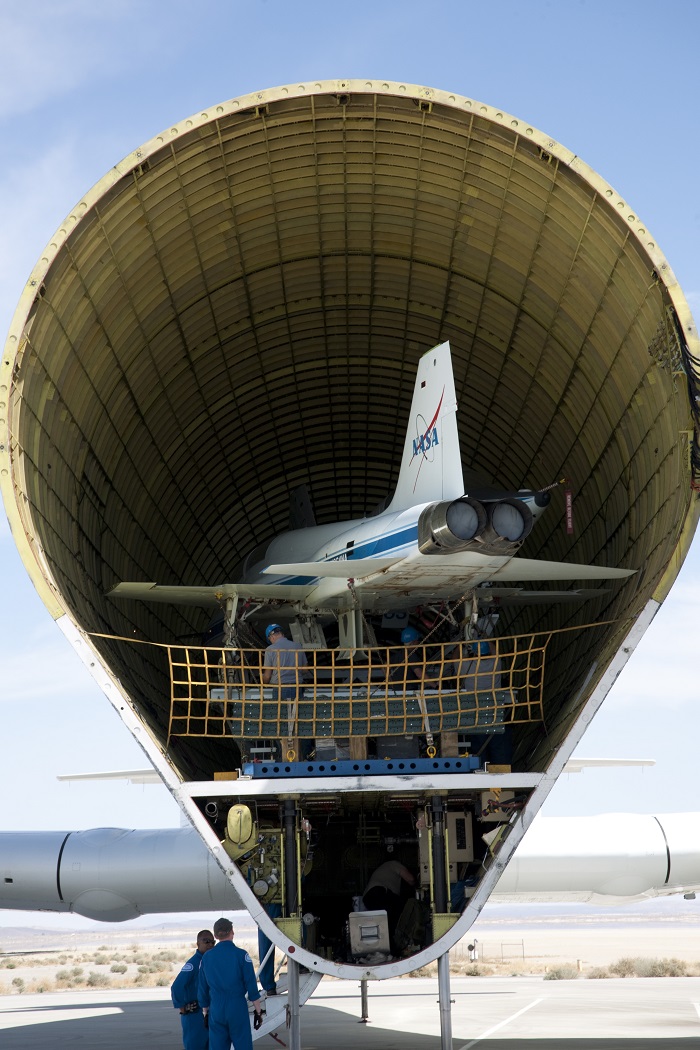 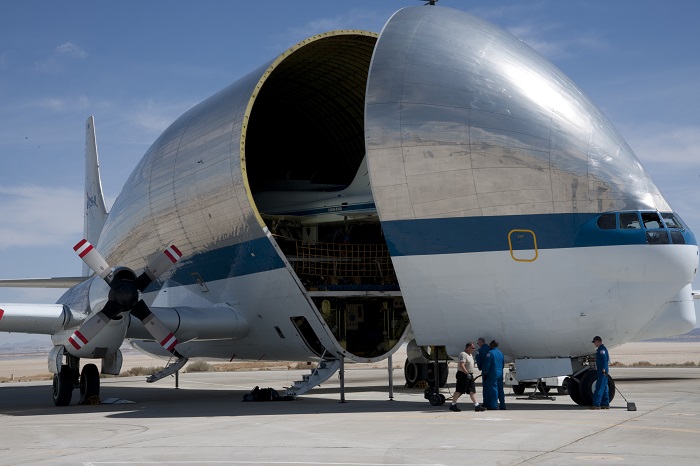 Dryden has seen the Super Guppy-Turbine before during the delivery of X-38 vehicle 131R prototype crew return vehicle on July 11, 2000. It also visited NASA Dryden for a landing gear change in 2005.

The Super Guppy is the latest iteration of its kind – the last of three outsized aircraft to have transported a number of NASA's hefty payloads ranging from Saturn rockets to International Space Station modules.

The Space Race had a number of complicated problems to solve, Elliott said. In 1962, California-based Aero Spacelines Industries solved the problem of transporting large components when it introduced the first Guppy aircraft. That first version of the Guppy was evaluated during flight tests flown at NASA's Flight Research Center at Edwards Air Force Base that fall.

Built from a heavily modified KC-97 Stratotanker, the B-377PG Pregnant Guppy featured the largest cargo compartment of any aircraft ever built to that time. At just over 19 feet in diameter, this massive cavity was specifically designed to carry the second stage of a Saturn rocket for the Apollo program, Elliott said. The Pregnant Guppy allowed NASA to deliver crucial oversized cargo to Cape Canaveral in 18 hours as opposed to 18 to 25 days aboard a barge, he added.

The program was so successful that it was followed by an even larger version of the aircraft in 1965. Dubbed the B377SG Super Guppy, it was equipped with a 25-foot diameter cargo bay, more powerful turboprop engines, a pressurized cockpit, and a hinged nose for easier loading of cargo. Aero Spacelines continued to own and operate the aircraft until 1981, when NASA purchased the aircraft.

During its 32 years of service, the original Super Guppy flew over 3 million miles in support of NASA’s Apollo, Gemini, Skylab, and International Space Station programs. It also transported the X-24B and HL-10 lifting bodies lifting bodies from NASA Dryden to the Air Force Museum adjacent to Wright-Patterson Air Force Base in Ohio in 1976. (The HL-10 was subsequently returned to NASA Dryden, and remains on display in front of the center today.)

The Super Guppy-Turbine version currently operated by NASA is the last generation of Guppy that Aero Spacelines built. The most important difference between it and its predecessor was an upgrade to more reliable and readily available Allison T-56 turboprops. Airbus Industries commissioned and operated four SGT Super Guppy-Turbine aircraft to ferry large A300 fuselage sections throughout Europe during the last three decades of the 20th century.

When Airbus retired its fleet to museums in 1997, NASA was able to acquire the number 4 aircraft to replace its aging B377SG Super Guppy under an International Space Station barter agreement with the European Space Agency.

NASA’s Super Guppy-Turbine continues to support America’s space program and is scheduled to transport the Orion Heat Shield from Textron Defense Systems near Boston to NASA's Kennedy Space Center at the end of March. The U.S. Department of Defense and government contractors also have tapped the Guppy's capabilities to move aircraft and large components around the continent, including T-38s for the Air Force and V-22s for the Navy. 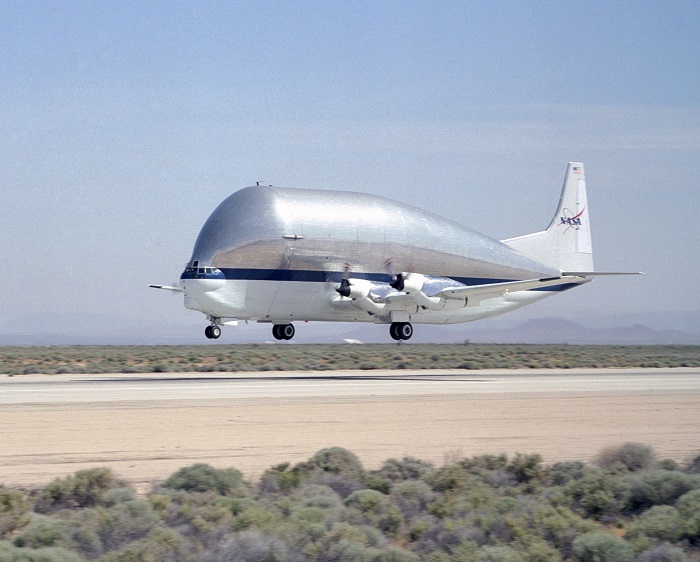 NASA's outsized SGT Super Guppy-Turbine transport aircraft lifts off the runway at Edwards Air Force Base after a prior visit. (NASA / Tony Landis)