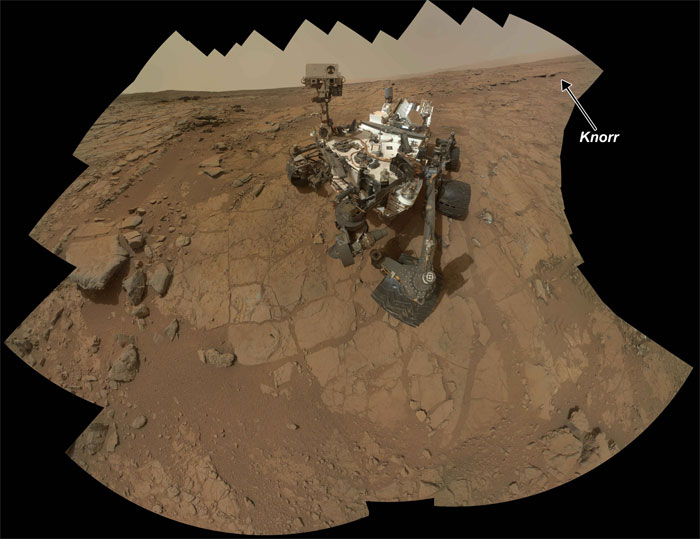 After recovering from a computer problem, the Mars rover Curiosity is sidelined again, further delaying the restart of science experiments.
The latest complication occurred over the weekend when the six-wheel rover entered safe mode after experiencing a software file error.
Curiosity remained in contact with ground controllers, but it can't zap rocks, snap pictures or roam around until the problem is fixed. Rover team members had expected to resume activities Monday, but they now have to wait a bit longer — perhaps until the end of the week.
"We would definitely like to get over this and get back to doing something," said project manager Richard Cook of the NASA Jet Propulsion Laboratory, which operates the $2.5 billion mission.
Studies at the Gale Crater landing site have been on hold since the beginning of March after engineers discovered a problem with Curiosity's computer memory, possibly caused by space radiation. The latest snafu isn't as serious, but any unexpected problem throws off the schedule, Cook said.
It's the longest stretch of inactivity since Curiosity's daring touchdown near the Martian equator last year.
Just before halting its investigations, the nuclear-powered rover used the drill at the end of its 7-foot-long robotic arm to bore into a rock near where it landed and analyze the powder.
Last week, scientists announced the results from the first drilling: Curiosity had discovered an ancient Martian environment that could have been favorable for primitive microbial life. Despite the excitement over achieving one of the mission's main goals, it has yet to find complex organic molecules considered the chemical building blocks of life.
Once Curiosity returns to normal, it'll only have a few days to work before a planetary alignment limits radio communication between Earth and Mars during most of next month.
.
Mars Science Laboratory Mission Status Report
PASADENA, Calif. - NASA's Mars rover Curiosity is expected to resume science investigations in a few days, as engineers quickly diagnosed a software issue that prompted the rover to put itself into a precautionary standby status over the weekend.
Curiosity initiated this automated fault-protection action, entering "safe mode" at about 8 p.m. PDT (11 p.m. EDT) on March 16, while operating on the B-side computer, one of its two main computers that are redundant to each other. It did not switch to the A-side computer, which was restored last week and is available as a back-up if needed. The rover is stable, healthy and in communication with engineers.
The safe-mode entry was triggered when a command file failed a size-check by the rover's protective software. Engineers diagnosed a software bug that appended an unrelated file to the file being checked, causing the size mismatch.
"This is a very straightforward matter to deal with," said the project manager for Curiosity, Richard Cook of NASA's Jet Propulsion Laboratory, Pasadena, Calif. "We can just delete that file, which we don't need any more, and we know how to keep this from occurring in the future."
The mission's science observations have been on hold since a memory glitch on the A-side computer on Feb. 27, which prompted controllers to command a swap from the A-side computer to the B-side computer. That operator-commanded swap put Curiosity into safe mode for two days. The rover team restored the availability of the A-side as a backup and prepared the B-side to resume full operations.
Cautiously bringing Curiosity out of safe mode status on the B-side is expected to take a couple of days. A four-week moratorium on sending commands to the rover will begin April 4 due to solar system geometry of Mars passing nearly directly behind the sun from Earth's perspective. The moratorium is a precaution against interference by the sun corrupting a command sent to the rover.
NASA's Mars Science Laboratory project is using Curiosity and the rover's 10 science instruments to investigate environmental history within Gale Crater, a location where the project has found that conditions were long ago favorable for microbial life. JPL, a division of the California Institute of Technology in Pasadena, manages the project for NASA's Science Mission Directorate in Washington.
Quelle: NASA
Mars-Curiosity Mars-Rover Curiosity
« Zum vorherigen Eintrag Zum nächsten Eintrag »
3946 Views
Created with page4