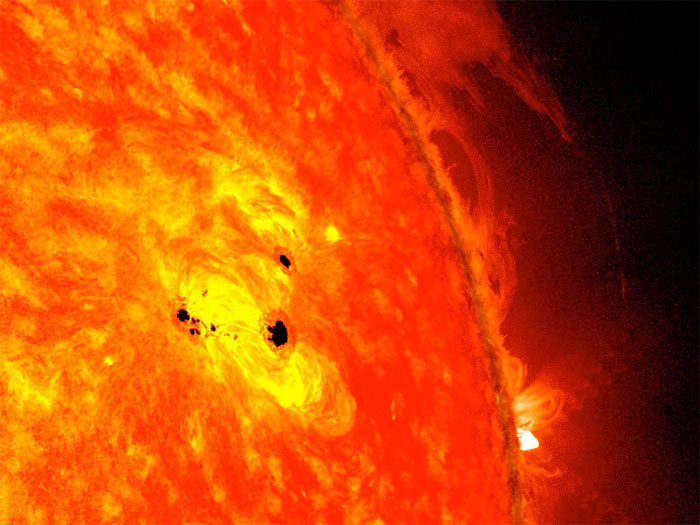 The bottom two black spots on the sun, known as sunspots, appeared quickly over the course of Feb. 19-20, 2013. These two sunspots are part of the same system and are over six Earths across.
CREDIT: NASA/SDO/AIA/HMI/Goddard Space Flight Center
.
A colossal sunspot on the surface of the sun is large enough to swallow six Earths whole, and could trigger solar flares this week, NASA scientists say.
The giant sunspot was captured on camera by NASA's Solar Dynamics Observatory as it swelled to enormous proportions over the 48 hours spanning Tuesday and Wednesday (Feb. 19 and 20). SDO is one of several spacecraft that constantly monitor the sun's space weather environment.
"It has grown to over six Earth diameters across, but its full extent is hard to judge since the spot lies on a sphere, not a flat disk," wrote NASA spokeswoman Karen Fox, of the agency's Goddard Space Flight Center in Greenbelt, Md., in an image description.
Quelle: NASA
« Zum vorherigen Eintrag Zum nächsten Eintrag »
4002 Views
Created with page4