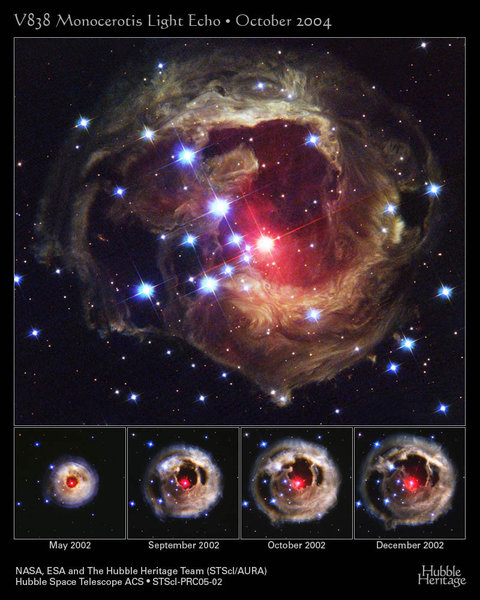 They've been a mystery ever since they burst onto the cosmic scene several years ago -- short-lived, red eruptions that burned brighter than novas, yet dimmer than supernovas.

Not only were astronomers hard pressed to explain what caused these newly observed events, they couldn't even agree on what to call them. They've been dubbed variously as supernova imposters, V838 Mon-like events, and intermediate-luminosity red transients, or ILRTs.

Now, scientists say they may have solved the mystery.

In a paper published Thursday in the journal Science, astrophysicists say the events bear the signature of two stars that temporarily orbit so close together that they share a "common envelope," or veil of gases.

In some instances, the close-orbiting stars will merge. But in other cases, scientists theorize, the stars will violently eject the superheated gas that surrounds them. The result, they say, is a "common envelope event."

Such events are believed to take anywhere from a dozen days to a few hundred years to complete, according to lead author Natalia Ivanova, an astrophysicist at the University of Alberta in Canada.

Until recently, common envelope events were theoretical. In the Science study, researchers created a model of what would occur during such an outburst, estimating the time scale, color, heat and speed of ejected matter.

When study authors compared their models with the various ILRTs that have been observed in the last few years, they found that they matched.

Whether such an event takes just days or centuries to play out, either time frame is considered extremely fast in a stellar context.

Because of this, study authors noted, it was surprising they were able to document the events in real time. "The short time scale for such events suggests that we would never directly observe them," authors wrote.