Even the humble dung beetle, its life spent barely an inch above the ground, pushing balls of waste, steers by starlight.
This unsuspected navigational mechanism, described Jan. 24 in Current Biology, is likely not limited to the Scarabaeus satyrus examined by the researchers.
Peering through compound eyes into the darkness of night, insects around the world may be guided by stars.
'It's just another example of how wonderful the animal kingdom is.'“It’s just another example of how wonderful the animal kingdom is, how the most amazing things have evolved,” said biologist Eric Warrant of Sweden’s Lund University, a co-author on the study.
Warrant has studied insect vision for nearly three decades, specializing in the systems used by dung beetles, that taxonomic superfamily of more than 5,000 species, found on every continent but Antarctica and quietly responsible for processing much of the animal world’s waste.
During the daytime, dung beetles use the sun’s position as a point of reference. At night, they variously orient themselves by the moon’s bright light or, if the disk is obscured by clouds, by patterns of polarized light in faint moonbeams.
Sometimes the moon is not visible at all, however, and dung beetles don’t use landmarks to orient themselves, raising the question of how they steer in these situations.
Warrant and study leader Marie Dacke, also a Lund University biologist, suspected that they used starlight — an obvious cue, but not one often considered relevant to insect navigation. Indeed, only birds, seals and humans have been proven to steer with stars, with humpback whales and southern cricket frogs as other likely candidates.
To test the notion, Dacke and Warrant analyzed the paths of S. satyrus rolling dung balls inside a circular, high-walled arena on a moonless, starry night.
When the arena was uncovered, the beetles moved in straight lines, as is their instinctive wont. When the arena was covered, however, hiding the stars that were their only possible point of reference, the beetles wandered back and forth in circuitous, seemingly confused routes.
- 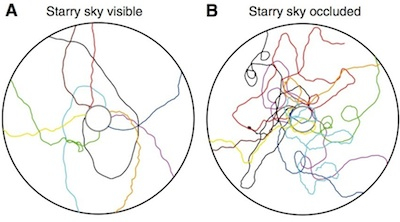 Paths taken by dung beetles able to see the starry sky (left) and with their view of the sky blocked (right). Image: Dacke et al./Current Biology
-
“They always roll straight. If they don’t roll straight, something is wrong,” said Warrant. “They have to get away from the dung pile as fast as possible, or the balls they roll will be stolen by other beetles.”
The researchers then repeated the experiment inside the Johannesburg planetarium, with the night sky’s constellations projected upon its domed ceiling. Once again, the beetles aimed true if they could see the stars, and wandered in confusion without them.
Dung beetle eyes are not strong enough to discern individual stars, “but they can see the bright streak of light that the Milky Way forms in the sky,” said Dacke.
Warrant speculates that many other insects, especially those that travel long distances at night, also steer by starlight, an ability that would likely have been favored by natural selection over evolutionary time.
Asked why he studies such an esoteric subject, Warrant noted that the insights gained from dung beetles could have utilitarian benefits — he owns a startup company that uses algorithms derived from nocturnal insect sight to process low-light images — though the simple beauty of fact is a justification in itself.
“It seems fantastic to us,” he said of the dung beetles’ astronomical ability. “It’s nothing we take for granted. It’s something we take for amazing every day we work with them.”
Warrant is also studying a how a certain species of Panamanian bee flies hundreds of feet in pitch-darkness through nighttime jungle, never once bumping into so much as a leaf, finding their hollowed-out stick homes without fail.
“How they do this is still a mystery,” he said.
Quelle:  “Dung Beetles Use the Milky Way for Orientation.” By Marie Dacke, Emily Baird, Marcus Byrne, Clarke H. Scholtz, Eric J. Warrant. Current Biology, 24 January 2013.
« Zum vorherigen Eintrag Zum nächsten Eintrag »
4219 Views
Created with page4