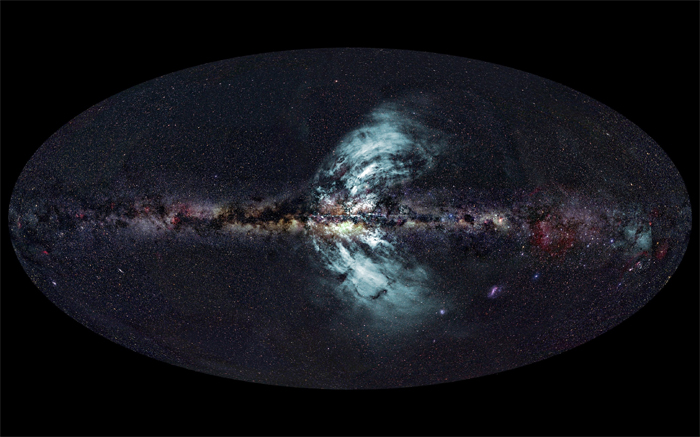 Our Galaxy's "geysers" are towers of power
.
"Monster" outflows of charged particles from the centre of our Galaxy, stretching more than halfway across the sky, have been detected and mapped with CSIRO's 64-m Parkes radio telescope.
-
The outflows were detected by astronomers from Australia, the USA, Italy and The Netherlands. They report their finding in today's issue of Nature.
"These outflows contain an extraordinary amount of energy — about a million times the energy of an exploding star," said the research team's leader, CSIRO's Dr Ettore Carretti.
"These outflows contain an extraordinary amount of energy — about a million times the energy of an exploding star."
Dr Ettore Carretti, CSIRO Astronomy and Space Science
But the outflows pose no danger to Earth or the Solar System.
The speed of the outflow is supersonic, about 1000 kilometres a second. "That's fast, even for astronomers," Dr Carretti said.
"They are not coming in our direction, but go up and down from the Galactic Plane. We are 30,000 light-years away from the Galactic Centre, in the Plane. They are no danger to us."
From top to bottom the outflows extend 50,000 light-years (five hundred thousand million million kilometres) out of the Galactic Plane.
That's equal to half the diameter of our Galaxy (which is 100,000 light-years — a million million million kilometres — across).
Seen from Earth, the outflows stretch about two-thirds across the sky from horizon to horizon.
The outflows correspond to a "haze" of microwave emission previously spotted by the WMAP and Planck space telescopes and regions of gamma-ray emission detected with NASA's Fermi space telescope in 2010, which were dubbed the "Fermi Bubbles".
The WMAP, Planck and Fermi observations did not provide enough evidence to indicate definitively the source of the radiation they detected, but the new Parkes observations do.
"The options were a quasar-like outburst from the black hole at the Galactic Centre, or star-power — the hot winds from young stars, and exploding stars," said team member Dr Gianni Bernardi of the Harvard-Smithsonian Center for Astrophysics, in Cambridge, Massachusetts.
"Our observations tell us it's star-power."
In fact, the outflows appear to have been driven by many generations of stars forming and exploding in the Galactic Centre over the last hundred million years.
The key to determining this was to measure the outflows' magnetic fields.
"We did this by measuring a key property of the radio waves from the outflows — their polarisation," said team member Dr Roland Crocker of the Max-Planck-Institut fuer Kernphysik in Heidelberg, Germany, and the Australian National University.
The new observations also help to answer one of astronomers' big questions about our Galaxy: how it generates and maintains its magnetic field.
"The outflow from the Galactic Centre is carrying off not just gas and high-energy electrons, but also strong magnetic fields," said team member Dr Marijke Haverkorn of Radboud University Nijmegen in The Netherlands.
"We suspect this must play a big part in generating the Galaxy's overall magnetic field."
-
Quelle: CSIRO
« Zum vorherigen Eintrag Zum nächsten Eintrag »
4031 Views
Created with page4