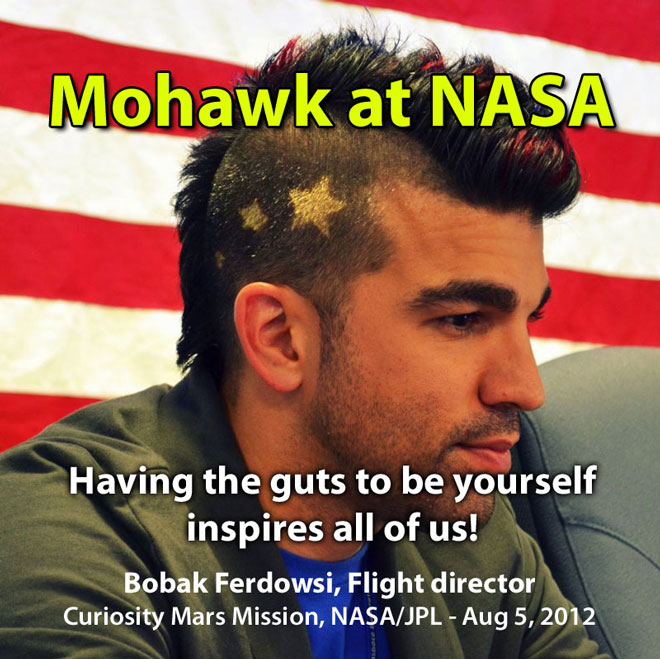 The distinctively coiffed NASA flight director who became known as "Mohawk Guy" when he and his colleagues guided rover Curiosity to a successful touchdown on Mars will be part of the presidential inauguration parade Monday in Washington, D.C.
Bobak Ferdowsi, of JPL in La Canada-Flintridge, will walk with fellow NASA scientists next to a full-scale model of the SUV-sized rover Curiosity.
"The things we do, the exploration we do, is not just about learning about other planets. It's about understanding our own," Ferdowsi said in a statement issued by the inauguration committee. "NASA gives us a chance to travel outside our world as a way to look back and learn about ourselves as a species -- as people. There's nowhere else in the world where you get to do that."
As Curiosity touched down Aug. 6 on Mars, Ferdowsi's popularity took off. There were tumblr pages, marriage proposals, memes and a lot more followers of @tweetsoutloud.
He became known as "Mohawk Guy" by viewers who watched the live feed of Curiosity's landing, the resulting celebration at mission control and Ferdowsi's impossible-to-miss cut with star-shape accents. But Ferdowsi plans to have a "slightly different" haircut during the parade.
"It’ll be something fun for the parade," he said. "It’s a bit of a surprise."
President Barack Obama's second-term inauguration comes about one week after scientists announced that Curiosity is on the way to a rock outcrop where it will drill into the Martian surface. The drilling marks the most complex engineering task since Curiosity landed in Gale crater.
The rover is part of an effort to determine whether environmental conditions on Mars could have been favorable to microbes. The journey to the drilling spot should take about two weeks.
Quelle: NBC
-
NASA is participating in the inauguration of President Obama with several events in Washington, D.C., including an open house, a star party and a NASA Social; exhibits on the National Mall and at NASA Headquarters; and two floats and marchers in the inaugural parade.
Members of the public will have an opportunity to meet and mingle with several astronauts and members of NASA's Mars Science Laboratory team responsible for the Curiosity rover, which is five months into a two-year mission on the Red Planet.
Friday, Jan. 18: Open House, Social at NASA Headquarters
10 a.m. - 4 p.m. EST
300 E St. SW, Washington D.C. (Enter through west lobby near 4th and E)
Panel discussions: 10 a.m. to noon, 2-4 p.m. in the James Webb Auditorium. Panelists include NASA astronauts and senior leaders.
Topics: The future of human spaceflight, technology innovation, science on the International Space Station, ongoing and future missions to Mars, a demonstration of NASA's robotic exoskeleton.
A NASA Social for our followers on Twitter, Facebook and Google+.
Saturday, Jan. 19: National Day of Service, National Mall
10 a.m. - 5 p.m. EST
NASA exhibit between 14th St. and 12th St. underpass (Education Section).
Meet astronauts, learn how to engage directly with NASA.
Astronaut appearances:
10 a.m.-noon: Kjell Lindgren and Serena Aunon
12:30-2:30 p.m.: Lee Morin and Kate Rubins
3-5 p.m.: Mike Massimino and Alvin Drew
Saturday, Jan. 19: Star Party, David M. Brown Planetarium
5:30 p.m. - 9:30 p.m. EST
1426 North Quincy Street, Arlington, Va.
Free and open to the public, no tickets required for star gazing
Telescopes provided; astronomers, astronauts, other experts on hand
Planetarium shows with limited, reserved seating. (›Details)
Not in D.C.? Post photos to the National Night Sky Gazing Flickr group
Monday, Jan. 21: Inaugural Parade
Full-size models of the Curiosity Mars rover and Orion, the multi-purpose capsule that will take our astronauts farther into space than ever.
Members of the Curiosity team from NASA's Jet Propulsion Laboratory
Current and former astronauts: Alvin Drew, Serena Aunon, Kate Rubins, Mike Massimino, Lee Morin and Kjell Lindgren, as well as Leland Melvin, NASA's associate administrator for Education, and John Grunsfeld, NASA's associate administrator for Science. 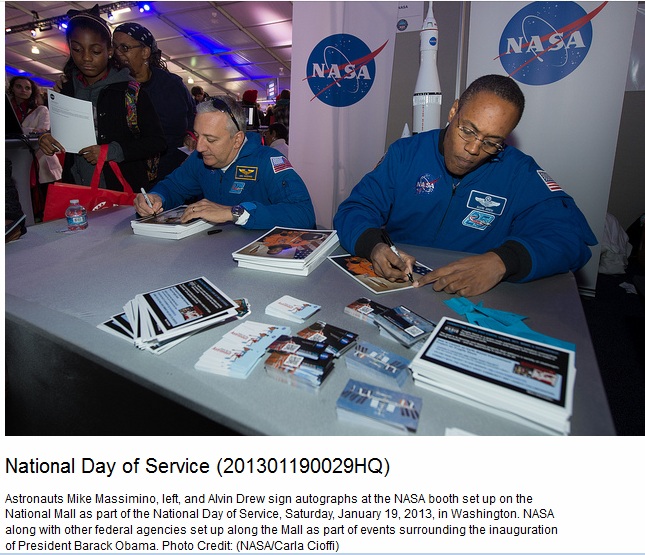 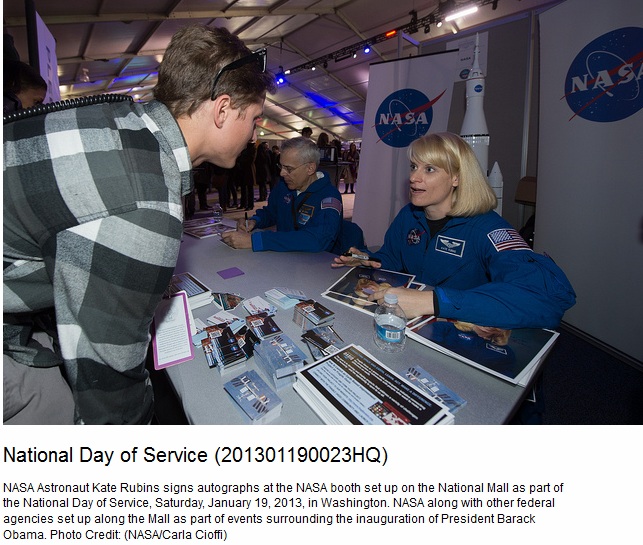 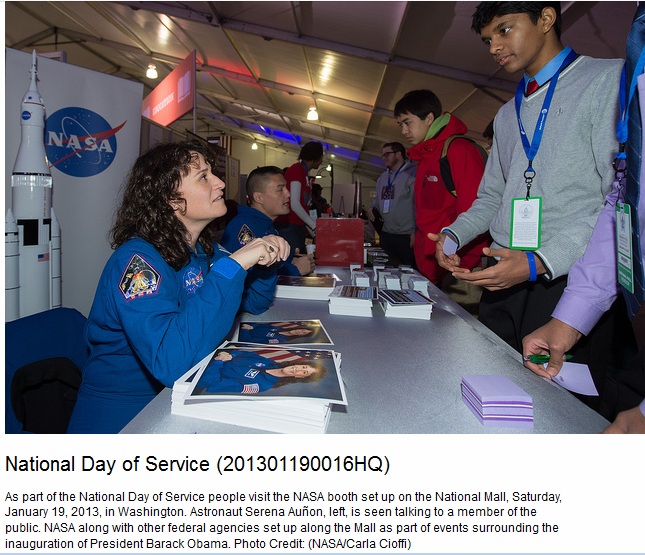 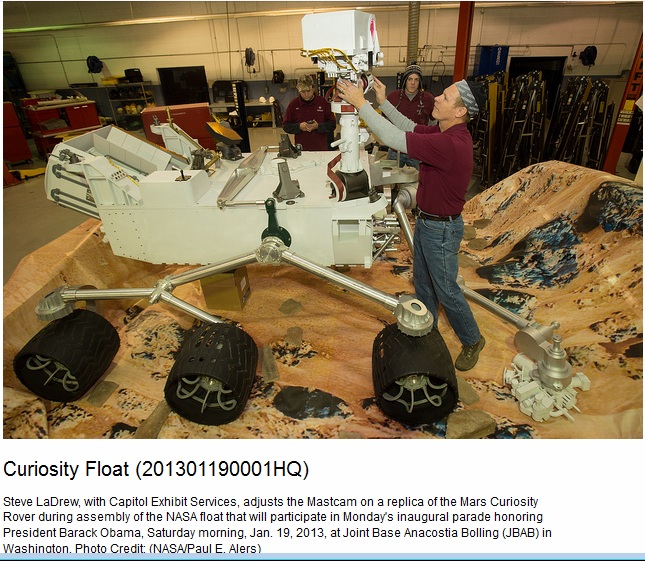 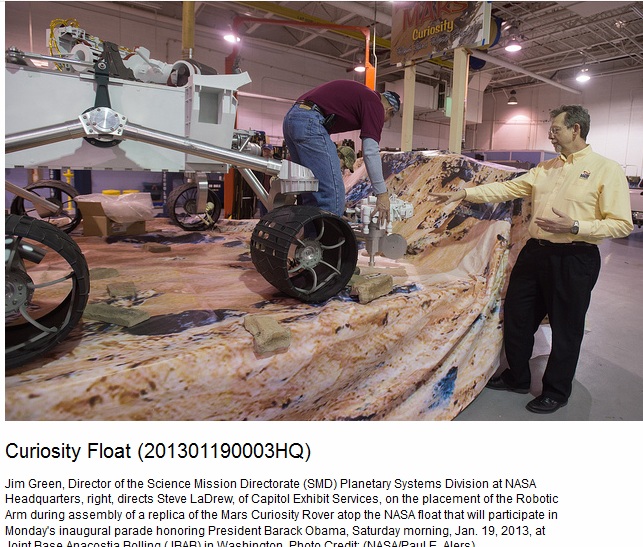 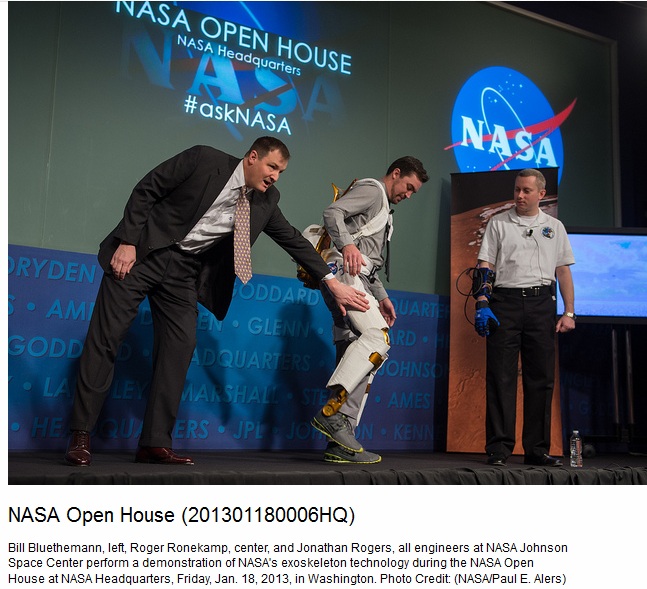 -- Full-size models of the Curiosity Mars rover and Orion, the multi-purpose capsule that will take our astronauts farther into space than ever.

--Members of the Curiosity team from NASA's Jet Propulsion Laboratory