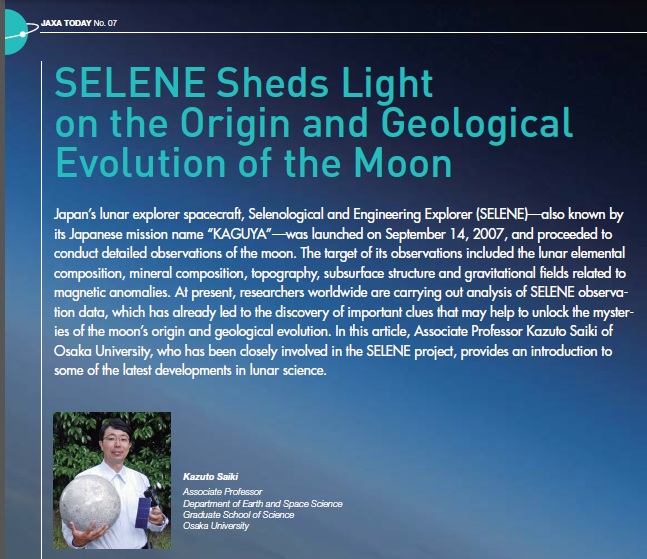 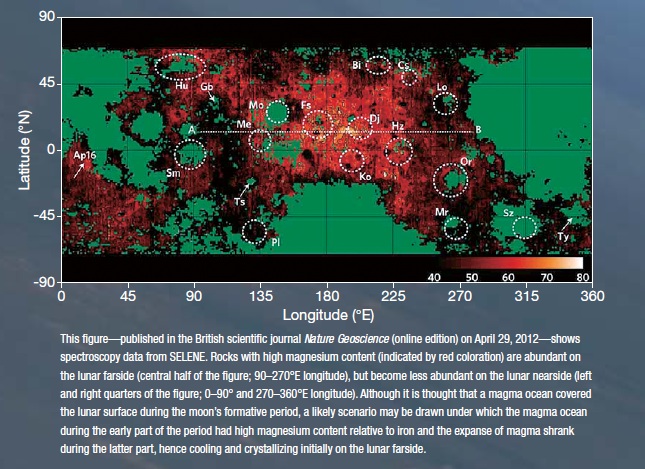 Scenario of the Moon’s Geological Evolution
Developed from SELENE Observation Data
Current research on the moon’s origin and geological
evolution focuses on three main topics. The fi rst topic
relates to the magma ocean hypothesis, which posits
that in the past a giant impact event caused melting
to signifi cant depth on the moon. It is thought that
when the magma ocean cooled, plagioclase feldspars
emerged, forming the lunar crust. Is this hypothesis
correct? If so, we need to clarify the process through
which the moon’s crust and mantle were formed.
The second topic of research relates to the aforementioned
giant impact hypothesis, which states that
the moon was formed from debris left over from a collision
between the Earth and a body the size of Mars
approximately 4.5 billion years ago. Within the magma
ocean hypothesis, there is the problem of what could
have been the source of heat large enough to melt the
moon to a depth of several hundred meters. However,
under the giant impact hypothesis, the moon started
out in a molten state, hence this problem does not
require further explanation. Nevertheless, we must
henceforth determine whether or not the giant impact
hypothesis is correct.
The third topic is the lunar mantle overturn model.
This model postulates that as the magma ocean
cooled, the magma became heavier than the rock
below it, leading to a reversal in position at some point
and the formation of the present-day lunar crust and
internal structure. We may also postulate that such a
mantle overturn created the differences between the
near and far sides of the moon.

While researchers currently work to gather evidence
that will prove which of these hypotheses are
correct, as the calibration accuracy of SELENE observation
data increases, new research results are
constantly being announced. For example, a research
paper—of which I am a co-author—led by Makiko
Ohtake of JAXA’s Institute of Space and Astronautical
Science (ISAS) uses spectral profi ler*1 data from
SELENE to report on the relative ratio of iron to magnesium
contained in rocks over the entire lunar surface.
Based on the results of this analysis, we are able
to build a scenario under which the lunar farside crust
began to crystallize earlier than its nearside counterpart
(please refer to the fi gure on page 18). I believe
that this research represents one of the most important
achievements to date from the SELENE project.
Candidate Landing Spots for the Next Lunar
Explorer
I would also like to briefl y discuss the candidate landing
spots for SELENE-2, JAXA’s proposed successor
to KAGUYA. Thanks to the emergence of research
results stemming from the SELENE project, I have
been able to co-author research articles with experts
from fi elds with which I previously had no contact.
Hence, I believe SELENE has spurred a broadening of
communication opportunities among scientists. I have
been interested in utilizing such dialogue to discuss
with a variety of scientifi c bodies what type of research
scientists are hoping to do through the SELENE-2 project
and fi nd out preferred locations for such research

on the moon’s surface. Consequently, approximately
70 candidate landing spots were put forward for
SELENE-2. Over a period of two years, this initial total
was reduced to 10 candidate spots. From among
these, I would like to introduce the main candidates.
The fi rst candidate region encompasses the
Copernicus, Tycho and Zucchius craters, whose investigation
includes such objectives as elucidating the
history of the formation of the lunar crust and differences
between the near and far sides of the moon—
or what may be termed the dichotomous nature of
the lunar geology. The Copernicus and Tycho craters
contain central peaks*2. Since it is thought that this
area includes material that has risen up from deep
underground, investigation of rocks here may provide
valuable information on the moon’s deep geology.
Zucchius Crater is believed to contain remnants of the
lunar crust from its earliest period.
Another candidate landing area is the Marius Hills, a
set of small volcanic domes. Similar to such terrestrial
volcanoes as Japan’s Izu Oshima, they are thought to
have formed where magma burst up through the surface.
SELENE’s Terrain Camera (TC)*3 found evidence
of a skylight in a large underground lava tube, which
may have signifi cant value for future lunar exploration.
This lava tube is believed to have formed during
underground lava fl ows, and the tube’s opening to
the surface was probably created by a meteorite impact.
The lava tube’s walls are likely coated in glass,
thereby providing an airtight enclosure. Since such an

underground lava tube interior would also be shielded
from cosmic radiation, it may be a candidate location
for a future lunar base.
Revealing the Earth’s History through Lunar
Exploration
In the past, it was thought that the moon was a simple
astronomical object and that its internal structure conformed
to the concentric model. However, it is now
known that the moon’s structure is, in fact, very heterogeneous.
The question of what happened on the
moon is of very great scientifi c interest, and I believe
that if we can answer this question satisfactorily it will
be very useful for understanding the Earth’s formative
period. On the other hand, when I look back at my
own reasons for pursuing research in this fi eld, since
childhood my dream has been to expand the boundaries
of human activity. Although I was too young to have
much memory of the Apollo program, which brought
back to Earth rocks from the moon, I was fascinated
by the images sent back by the Pioneer 10 and 11
space probes revealing many secrets of the outer
planets. Such achievements convinced me that by the
time I grew up, humans would be living on the moon. I
am still keen to see the early construction of a colony
on the moon, and hope that this will be the forerunner
of more distant space endeavor by humanity. 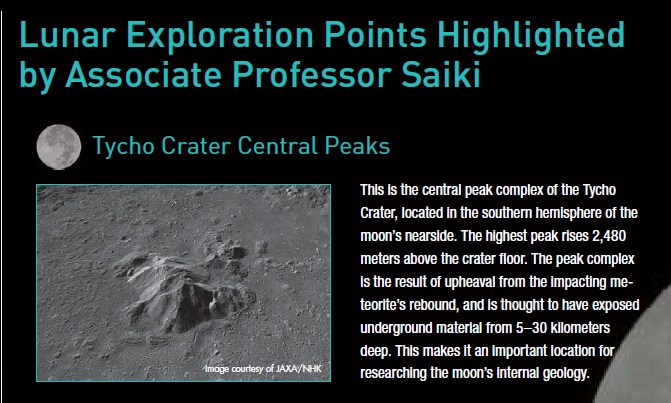 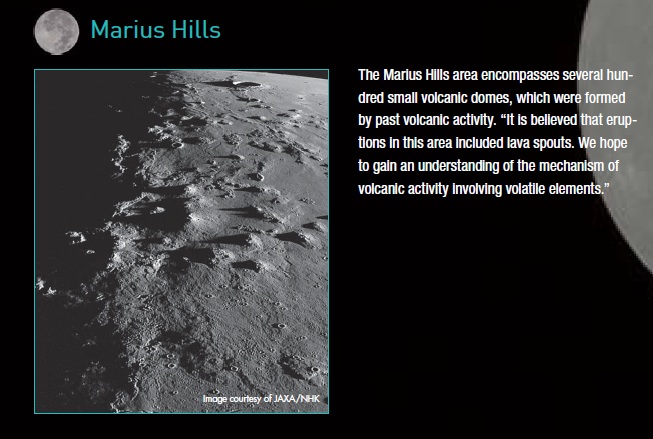